A new report from Philanthropy for Social Justice and Peace entitled Philanthropy in the Arab Region makes a valuable contribution to understanding philanthropic efforts across the Middle East through highlighting both the excellent work that is going on in the region as well as drawing our attention to the challenges facing the nascent sector. 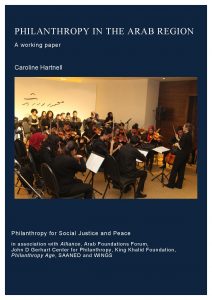 The report, in its own words, aims to ‘provide an overview of the current state of philanthropy in the Arab region, particularly shining a light on new areas and innovation within philanthropy and the implications of these for its future role’.

To do this, the report relies on interviews with approximately 20 philanthropists, philanthropy executives, and civil society actors working in the Arab region. In taking this approach, the report is unique in that it captures the views and opinions of those actually working with or in the sector and in the region, and it thus provides refreshing examination of the topic.

When exploring the current state of philanthropy in the region today, the common thread across all interviewees in the report is a concern over regulatory and legal structures that either do not exist to allow for formal incorporation of philanthropic entities or are overly rigid and inhibit the giving of grants and moving of funds across countries. In addition, there is concern from those who are based in North Africa that following the Arab Spring many philanthropic efforts are viewed with suspicion and even as perhaps anti-government, consequently further hindering in country activities or regulatory reforms. On the positive side, there is optimism about the growing number of philanthropic efforts coming out of the Gulf and the support that has been given to these from various ruling families and businessmen from the region. These newer organisations are often seen to be more professional and open to new ideas and approaches to philanthropic giving. Some of these more recently established foundations, both in the Gulf and the Levant, also appear to be more concerned with implementing more rigorous approaches to monitoring and evaluation in order to ensure that their giving is making a difference to their target populations.

Another trend that the report highlights is the need for closer collaboration between the private sector, the public sector, and the charitable sector in order to benefit more people and create new synergies between these three sectors. A number of people interviewed emphasised the importance of this, not only to increase the reach of philanthropic activities, but also for sustainability, particularly in terms of financial security. In particular there was concern relating to the importance of enabling foundations to set up secure endowments and reducing the many legal barriers to this that currently exist in the region.

While the report is very comprehensive in its information and interviews, a lack of data, something that was highlighted by a number of respondents, left the report somewhat lacking in objective facts and figures. The report would have benefitted from some verified statistics relating to the number of philanthropic entities in the region, the growth in these over the past few decades, or perhaps information regarding the type of work that they are engaged in. This would have provided some more concrete data for researchers and policy makers to use in future reports or research on the sector.

There was also a clear preference of those who were interviewed towards more large scale and commercially minded philanthropy, typically referred to as impact or venture philanthropy. It would have been helpful if this was perhaps interrogated a little more rather than taken at face value as a good thing for the sector. The increased involvement of private actors in development and the outsized influence of big philanthropy on sovereign countries domestic policies, for better or worse, is an increasingly well-documented area. In a report such as this, it would have been interesting if this was acknowledged and explored more. While there are benefits to the increased involvement of private sector foundations and corporate social responsibility (CSR) initiatives, it needs to be kept in mind that these organisations will still have strong ties and interests related to the parent company’s business activities and to shareholders. Thus, conflicts of interests may occur and could influence the way in which philanthropic organisations prioritise their work or engage with local governments.