The world’s leading philanthropist, Bill Gates, is facing growing criticism from the philanthropic sector for his decision to give an award to India’s Prime Minister, Narendra Modi, in recognition of the Indian government’s Swachh Bharat mission, a major public health initiative to provide safe sanitation in India. 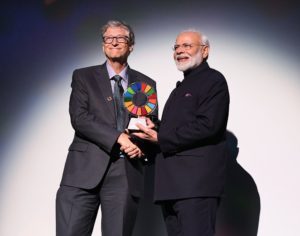 The controversial ‘Global Goalkeeper’ award was handed to Narendra Modi by Bill Gates at a ceremony at the United Nations on 25 September to mark contributions to achieving the Global Goals for 2030 known as the Sustainable Development Goals.

However the award has led to intense disquiet and at times outright criticism within the philanthropy community. The Human Rights Funders Network (HRFN), which counts some of the largest human rights funders in its membership expressed disappointment telling Alliance that the award undermined the Gates Foundation’s ‘credibility’ as a champion of human rights and its efforts to reduce inequality.

‘As a network of human rights donors committed to advancing human rights, it’s disappointing to see the Gates Foundation honor Prime Minister Modi with this award. In our most recent list of top human rights funders, Gates ranked number nine. Rewarding PM Modi for his contributions to improved living conditions for some citizens, neglects the increased attacks on minorities and restrictions on free speech and civic space that have flourished under his leadership. The Gates Foundation undermines its significant efforts to reduce inequality and its credibility as a champion for human rights with this award.

While HRFN’s counterpart, Ariadne – the European Human Rights Funders Network, were unable to comment on the decisions of specific foundations, HRFN’s concerns were echoed by a number of senior figures across the global philanthropy sector

A leading philanthropy practitioner in India, who asked not to be named due to fears that it could compromise potential funding relationships, called the decision a ‘body blow’ to Indian philanthropy and civil society which would make it harder to speak out about the abuse of minority rights. ‘For civil society {this award} encourages further hostile action at a time when the situation is already dire. For philanthropy, it makes it even harder for other philanthropists, especially Indian ones, to take a principled, public stance. For Kashmiris and those seeking to protect India’s constitutional values it’s a body blow. And, it is unlikely to buy any consideration from the government for the Gates Foundation or its partners. We are saddened, disheartened and severely disappointed by the Bill and Melinda Gates Foundation’s choice’.

According to latest figures from Advancing Human Rights, a research initiative led by Candid and the Human Rights Funders Network, the Gates Foundation is the world’s ninth largest human rights funder spending $93 million on human rights causes in 2016. However, its work is typically framed more around promoting global health, development and tackling inequality rather than human rights. 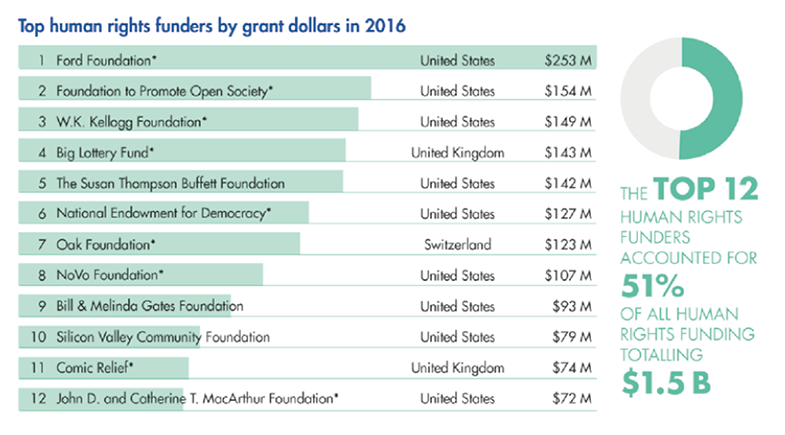 Source: Candid, 2019. The amounts presented here reflect the full value of each funder’s grantmaking for human rights, including grants to other foundations in the set. To address potential double-counting in figures, receipients who are also funders were removed to arrive at the $2.8 billion for 2016 total human rights grantmaking figure that appears in other sections of the analysis. *Denotes membership HRFN, Ariadne, or Prospera.

Public concerns about the Gates award first surfaced in the philanthropy sector last month when a coalition known as South Asian Americans in Philanthropy called on the Gates Foundation to reverse its plans to give an award to Modi. The decision has also led to unease inside the Gates Foundation itself including the resignation of a member of the Foundation’s staff in India. Writing in the New York Times, Sabah Hamid said she quit her role because the decision violated the ‘spirit’ of the foundation’s mission that all lives have equal value given Modi’s alleged persecution of minority groups in the country, she argued.

The controversy has also focused attention on the University of Cambridge, where the foundation has funded a major scholarship programme. Bill Gates spoke at the Cambridge Union today, 7 October, to accept a Stephen Hawking Fellowship award in recognition of his contribution to science and funding for the university. According to student newspaper, Varsity, ‘the Gates’ Foundation’s decision to give the award to Modi could be a topic of student questions when Bill Gates delivers a talk at the Cambridge Union’.

The disquiet at Cambridge follows an open letter signed by over 100 Gates Cambridge Scholars and alumni at the University. Last month, the scholars wrote to the Gates Foundation to ‘unequivocally condemn the Bill and Melinda Gates Foundation’s decision to present the Global Goalkeeper Award to the Prime Minister of India, Narendra Modi. Lauding PM Modi for the Swachh Bharat Mission (Clean India Mission) while ignoring the gross violation of human rights under his regime is reprehensible.’ While the letter has been endorsed by the Cambridge Graduate Union, which represents graduate students across the university, a spokesperson for the University of Cambridge refused to comment directly on the concerns of their scholars. In a statement to Alliance, the University said:

Other leading human rights funders, umbrella bodies and Indian philanthropists have also avoided expressing their concerns publicly. Spokespersons at the Ford, Novo and Oak Foundation all declined to comment as did the US based Council on Foundations and UK based Association of Charitable Foundations, where the Gates Foundation has offices.

Oxfam India, who have a partnership with the Gates Foundation, declined to comment as did another champion of human rights in India, philanthropist, Rohini Nilekani, who is a signatory of the Gates-Buffett Giving Pledge.

The apparent need for major foundations to sometimes make difficult trade-offs to achieve development gains, even if it means working with people whose human rights records fall short of international standards, seems to be at the heart of the Gates Foundation’s decision to give this award.

In a statement, the Gates Foundation told Alliance: ‘Prime Minister Narendra Modi received an award at the Goalkeepers Global Goals Awards from the Bill & Melinda Gates Foundation for the progress India is making in improving sanitation, as part of its drive toward achievement of the UN Sustainable Development Goals. Sanitation is a key factor in improving the health and well-being of millions of people, especially women and children.

Globally, sanitation-related diseases kill nearly 500,000 children under the age of 5 every year. Yet despite its importance, sanitation has not received significant attention. A lot of governments are not willing to talk about it, in part because there are not easy solutions. Before the Swachh Bharat mission, over 500 million people in India did not have access to safe sanitation, and now, the majority do. There is still a long way to go, but the impacts of access to sanitation in India are already being realized. The Swachh Bharat Mission can serve as a model for other countries around the world that urgently need to improve access to sanitation for the world’s poorest.’

The choppy waters facing the Gates Foundation come at a time of considerable public profile for the philanthropy including a Netflix documentary series about Bill Gates and an announcement last week by Melinda Gates that her investment firm, Pivotal Ventures would commit $1 billion to promote gender equality in the US.

This is a great piece . Human rights watch and annesty international have showed in detail the crimes in Kashmir by Midis government.

Thank you for undertaking this piece, which seems balanced and well-crafted. We need to be braver in having these difficult conversations in public. So double thank you for your bravery in taking this on. I was struck by the large number of “no comments”, which interestingly highlight the convictions of Gates Foundation in making what it surely understood full well would be a controversial award. Personally, I am critical of the award. At the same time, I applaud the larger argument and stance that Gates Foundation is making about the historical neglect and critical importance of sanitation in development programming. Surely the foundation with all its resources could have found another way to recognize India’s progress on sanitation — still uneven, by the way — without honoring a callous and crude human rights abuser. For me this is the sting in the tail of this sorry affair. Organized philanthropy can and must do better than this.