According to preliminary data from a survey by the Organisation for Economic Co-operation and Development (OECD), over 70 private foundations around the globe contributed $19.5 billion towards the economic development and welfare of developing countries over a three year period (2013-15) with an average of $6.5 billion per year.

The survey methods include data and qualitative questionnaires, research of foundations’ websites, and secondary source data from 990-PF’s in the US, 360Giving in the UK, and the International Aid Transparency Initiative.

The Bill and Melinda Gates Foundation, which gave more than $11.6 billion over the period was the most generous foundation, contributing 60 per cent of the total giving. The Children’s Investment Fund Foundation (CIFF), funded through the wealth of UK hedge fund manager Chris Hohn and his former wife Jamie Cooper, was the next largest giver with $747.9 million.

Grants from foundations in the US and Canada accounted for the largest proportion of giving with 76 per cent, but the survey revealed that Europe-based foundations contributed a substantial 19 per cent of the overall development giving.

The data further revealed that $8.9 billion, or 46 per cent, of the total giving had a global distribution scope. Nearly 30 per cent of the giving was targeted to Africa, while 16 per cent went to Asia. 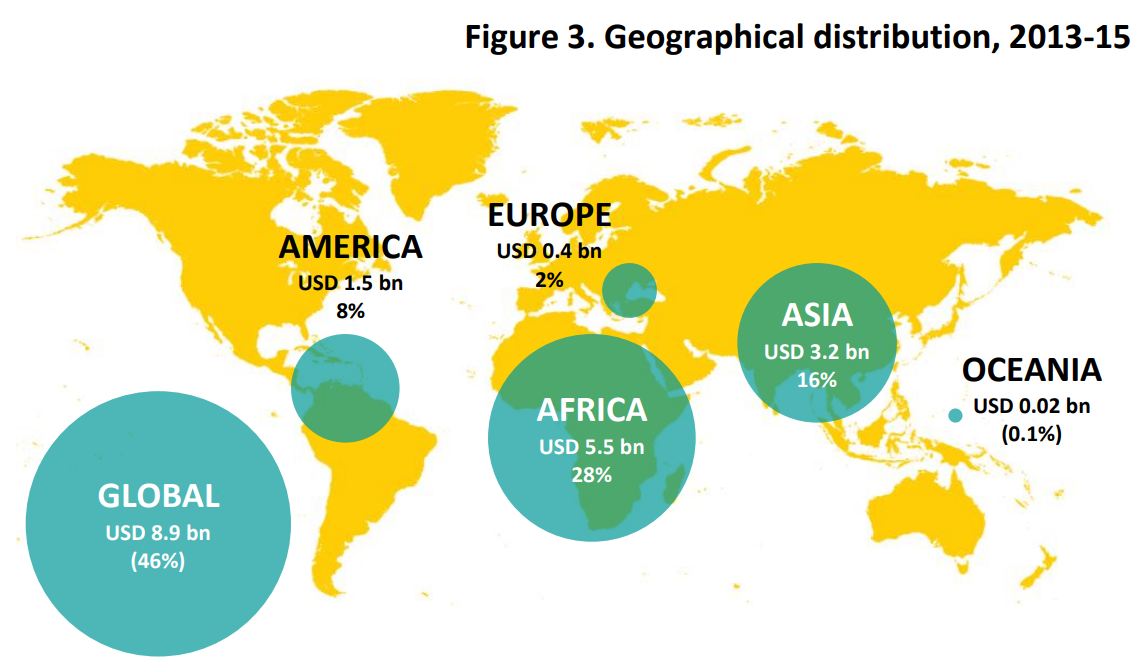 Infographic from the OECD report.

Health and reproductive health and population sectors were primary targets of giving, for the three-year period, accounting for 57 per cent of the total giving. Agriculture (9 per cent), government and civil society (8 per cent), and education (7 per cent) also received a significant proportion of the giving.

However, when the Gates Foundation is excluded from the data, the survey found that government and civil society, education, and general environmental protection were the top targets.

According to OECD, this data suggests that philanthropy plays a major role in helping developing countries achieve at least three sustainable development goals (SDGs), including ‘ensure healthy lives and wellbeing for all at all ages,’ ‘inclusive and quality education and lifelong learning’ and ‘peace, justice and strong institutions.’

While foundations have always been advocates for development and social justice, its presence in global development has increased since the introduction of SDGs by the UN in 2015. However, the OECD cites that data on foundations’ activities regarding SDGs is not readily available, making it difficult to fully analyse the impact foundations have on the implementation of SDGs.

The full report from the OECD will be released in late 2017. To read their preliminary data, see here.

For more on the OECD’s work on philanthropy and global development, see here.

Amanda Aguilar is a student at the University of California, Davis, and an editorial intern with Alliance.
Charles Keidan is editor of Alliance magazine.