The Foundation formed an alliance with Sabatier Film Group,  producer of a documentary film entitled “333” about Mali, its ancient manuscripts, and the Ambassadors of Peace, a group of Islamic scholars who for nearly one thousand years have sat daily before sunrise in a forum called the “Circle of Knowledge,” imparting manuscript wisdom to their followers.

“333” previewed at the United Nations to three separate ovations, and has been screened to select audiences in Europe and North America, to positive acclaim.  We have created partnerships with the U.S. Library of Congress, Dignitatis Humanae Institute, and Cordoba Initiative, and expect more partnerships to develop.  We will continue to screen “333” at colleges and universities – with the goal of digitizing, translating, and preserving the manuscripts in climate controlled libraries, enabling global distribution of manuscript knowledge.

In its heyday, approximately 25,000 students from across Africa, the Middle East, and Europe came annually to Timbuktu to study at the University of Sankoré, producing an intensely rich literary and scientific heritage.

Many students remained in Timbuktu to write their own manuscripts about nearly every science under the sun, including astrology, architecture, biology, chemistry, geography, history, jurisprudence, mathematics, physics, religion, women’s rights, children’s rights, animal rights, and most important, the peaceful resolution of conflict through dialogue, tolerance, understanding and forgiveness — still the best way to prevent and end wars.

Designed, constructed and controlled by King Mansa Musa, Sankoré was established in 1327 in Timbuktu, in the Kingdom of Mali, centuries before Harvard was established in the United States. Throughout four centuries, Sankoré provided its students with the best education available anywhere.  By the end of Mansa Musa’s reign (early 14th Century CE), Sankoré had become a fully staffed Islamic university with as many as five hundred thousand books in its library, the largest collection of books in Africa.

The University of Sankoré included three great mosques — Sankoré, Djinguereber and Sidi Yahya – plus one-hundred-eighty Koranic schools, all under the King’s supervision.  Although Mali controlled two-thirds of the global gold supply, plus the trade in salt and slaves, the manuscripts were Mali’s most valuable and celebrated commodity.  By the end of the sixteenth century, Sankoré graduates were said to have written nearly one million manuscripts. 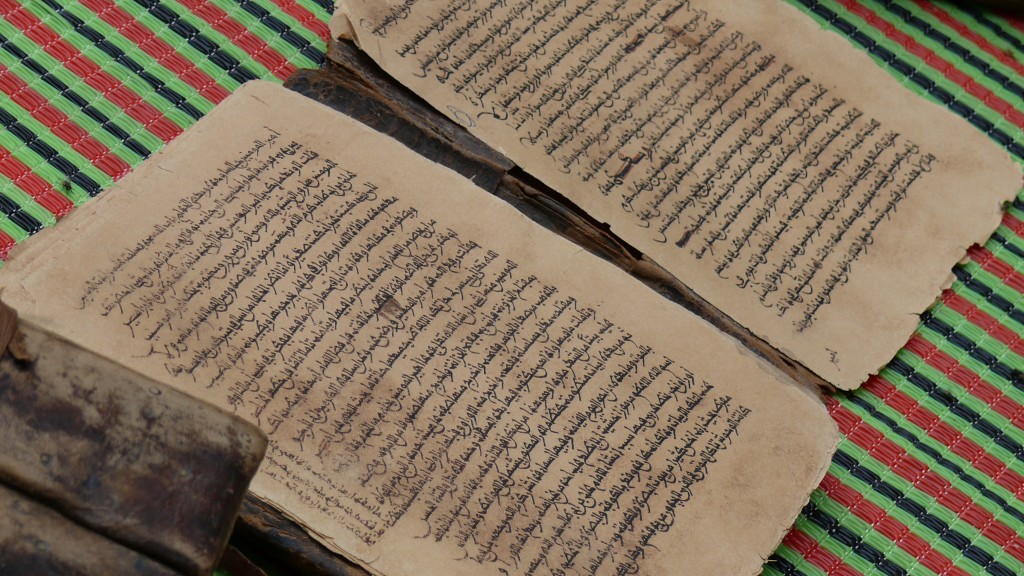 There were four distinct levels of education at the University.

In the entry level, every student was required to attend Koranic school, master Arabic, and memorize and understand the subtle nuances of the Koran; they were also introduced to basic sciences and jurisprudence.  At that stage, students followed the rigorous discipline of the ‘greater jihad’ – the nourishment of a harmonious, loving relationship with one’s self, with God, and with all of humanity.  The essence of Islam is the commitment to cleanse one’s self of impure thinking and conduct.

At the final level – scholars studied for thirty-five years under the tutelage of a single instructor – graduating to become judges or professors.  Subsequently, they sent other scholars to principal cities in Mali, so that they too could achieve the status of judgeship or professorship.  The educational process is complete only when one achieves expertise at teaching others effectively.

Many of these valuable tomes have since been lost, stolen or destroyed.   Prompted by recent conflicts, ancient manuscripts have been secreted far and wide across Mali and beyond.  If their preservation and digitization is not undertaken immediately, the ravages of the Sahara sands, plus losses due to theft, weather, humidity, poor storage, and time itself, will forever usurp this critically important cultural, literary and human legacy.  Those who possess the deepest understanding of the manuscripts’ contents, who have inherited and retained the ancestral knowledge and practice from these writings, are a dying breed.

A glimpse into the complexity and richness of ancient Malian cultural life, provided by “333,” explains why we want to save these great manuscripts.  We believe that Mali’s past is relevant today to the preservation of humanity, and indeed, our planet.

With so little information in the world about these teachings – and with countries worldwide in conflict – amongst various sects and factions promoting the lesser Jihad, it is especially important to preserve another view of Islam.  Sharing these manuscripts widely, we hope, will let the world see this truth.

Nothing could be more important to the advancement of society and the survival of our planet.