Proximity as a value: Grassroots leaders as intellectual partners

The Lewis Foundation on climate action in South Africa

Gates, Soros team up on access to medical technology

This article is part of a series of articles about Community-Led Philanthropy, co-hosted by GlobalGiving. The conversation explores the ways philanthropy can support community-led change.

The instrumentalist approach often adopted by governmental agencies, INGOs, and NGOs to grassroots organisations that view them as merely assistance providers or implementing agencies for service delivery does a disservice to their affective and intellectual contributions to social change processes. 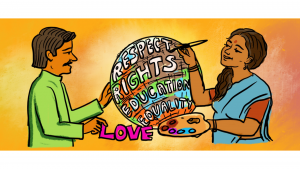 Image courtesy of the author

‘When the pandemic hit and the government announced the sudden lockdown, we were filled with fear and confusion. Where do we turn? The government did not care about us, the employers too were not concerned about us. It is our CBO (Community Based Organisation) leaders that we turned to’, said a transgender sex worker from  Karnataka.

The almost instinctive reliance on the community leaders for help and support by members of marginalised communities is a reflection of the deep bonds that exist between the leaders and the members.  A bond reinforced by proximity.  CBOs are most often in the same geographical area as the communities that they serve. Currently, however, the idea of community is associated with place and geographical proximity has been contested given the growth of ‘aspatial, identity-based communities’.

Proximity goes beyond mere physical nearness. It implies emotional closeness, shared sentiments and beliefs, and commonality in terms of background and experiences.   These CBOs are often an oasis of hope and courage. ‘Here we feel we can talk openly. So, despite my family hitting me for going to ‘that kind of office’ I kept going there. Now I realize that I don’t have to be ashamed of my gender identity’, said a gay man from Tamil Nadu.

Community leaders speak the same language as the members. They are approachable and it is difficult for them to turn away their members without attempting to discuss the issue they have brought up given the deep reciprocal relationships that often exist between leaders and members. The relationship between members and CBOs is often expressed in familial terms, indicating another kind of proximity in terms of relationships. This is in contrast to the relationship with the state, or even the NGO that is considered as more distant and formal.

‘The NGO may just say we don’t have any budgetary allocation for this activity so we cannot do it. But for us it is different. We see what best we can do for them. Community members will also say to us – you know how much I am suffering, what is a point of a CBO if you don’t help us’, said a sex worker leader from Andhra Pradesh, India.

This proximity and participation of the CBO in struggles on the ground results in people learning not only numerous skills but also generates knowledge. People think analytically and strategically as their movement changes and evolves.  The current trend among funding circles of searching for ‘solutions’ often discounts these rich insights. The assumed positional superiority of professionalised knowledge may sideline, or erase critical knowledge that emerges from social movement activism.  This is not to suggest that we adopt simplistic binaries of ‘good’ grasssroots activists versus ‘bad’ international NGOs.  Rather a less hierarchical relationship will create room for the diverse strategies and ways forward and more importantly may offer fresh ways of looking at the programming and reflect new broader understandings to the fundamental question of what development or empowerment offers.

For the idea of building an interactive community-based agenda with local leaders as equal partners to receive acceptance at the higher levels of NGOs, INGOs, and the state, they must recognize the  ‘pedagogy of mobilization’ i.e ‘the learning inherent in the building and maintaining of a social movement and its organization’ as valid and crucial to social transformation.

Shubha Chacko is the Executive Director of Solidarity Foundation, an Indian NGO that supports grassroots level organisations of gender/sexual minorities (LGBTIAQ+) and sex workers by building collectives, capacities and connections.