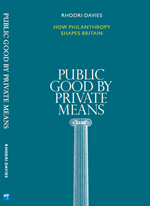 About the Book
Public Good by Private Means tells the story of philanthropy through the ages. It examines the relationship between philanthropists, the state and society, and throws light on the successes – and occasional spectacular failures – of great philanthropists from the past. It shows what history can tell us about modern philanthropy, including some of the current criticisms it faces, and considers difficult issues such as the link between tax and giving and the motivations of the wealthy.

About the author
Rhodri Davies works at CAF, where he leads Giving Thought – CAF’s in-house think tank focussing on current and future issues affecting philanthropy and the charitable sector. He has researched, written and presented on a wide range of topics – from the history of philanthropy to the charitable applications of cutting-edge technologies– and is much in demand as an adviser to governments, businesses, charities and philanthropists.

Public Good by Private Means is now available to order on Amazon with Kindle and paperback versions.