Feminist movements face growing hostility in Poland due to political unrest and shrinking civic space driven by the rise of ultra-right authoritarianism. Peaceful protests and solidarity demonstrations for LGBTI and women’s rights have recently been met with an unprecedented police crackdown. Activists have been beaten up and arrested, and some now face criminal charges. 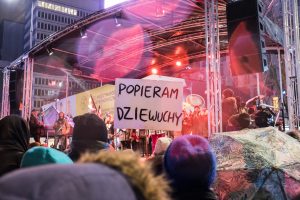 FemFund is the first and only feminist grant-maker in Poland promoting feminist activism with small institutional grants. It supports women-led NGOs and self-organised informal groups, particularly outside of Warsaw. FemFund was set up with a seed grant from the Sigrid Rausing Trust (SRT) in 2017, when a group of activists mobilised to resource the emergent wave of activism in the face of attempts to curtail women’s rights. SRT has continued to support FemFund through multi-year, unrestricted grants.

Still in its early stages, FemFund has successfully centred its funding model on participatory grant-making, collective care, and community organising. After four years of operating, we had a candid conversation with FemFund and some of its grantee partners about the value of unrestricted funding. Learning from FemFund helps to ensure that our grant-making is responsive to the needs of feminist movements. Whilst focused on Poland, we hope our reflections will support other actors’ thinking around funding feminist movements, including in contexts of rising fundamentalisms.

1. Challenging power structures in funding: FemFund’s approach aims to dismantle the power structures built into traditional funding relationships and re-imagine philanthropy as a space to practice solidarity and empathy. ‘The Fund is a feminist community, focused on values such as equality, justice, mutual assistance, and shared ownership,’ said Magda Pocheć, Coordinator of FemFund. Calls for proposals are open to a plethora of ideas, and applicants who meet the selection criteria vote on other applications and collectively decide where funding goes.

Last year, approximately 100 Polish municipalities passed symbolic resolutions declaring themselves as ‘LGBT ideology-free zones’. Queer Tour, a small collective of LGBTI people and FemFund’s grantee, travels to small towns located within these ‘zones’ to educate communities on LGBTI rights. Queer Tour values the trust-based funding relationship it has with FemFund. ‘Our main strength is our collective care,’ said Gosia from Queer Tour. ‘FemFund has given us confidence. You can talk to them and change plans without obsessing over meeting indicators. Flexible funding and reporting does not kill the spirit and helps us survive’. Gosia noted that flexible funding is a necessity – ‘not a luxury’ as many activists face several hardships and are often on the edge of burnout.

2. Building diverse and inclusive feminist movements: FemFund’s grantees emphasised the role informal groups play within wider movements and the importance of finding ways to channel resources to them. A controversial near-total ban on abortion in Poland took effect in January 2021. Karolina from Abortion Dream Team, which has disseminated reliable information and contributed to changing the narrative about access to abortion since 2016, said they were an ‘informal group on purpose’. Karolina spoke about the need for the Polish reproductive rights movement to have multiple leaders, fostering a diversity of approaches. ‘Every social movement needs groups that speak out and push things in different directions,’ she commented. Similarly, Gosia from Queer Tour noted that FemFund does not impose its priorities or agenda on groups. ‘We didn’t have to change our language to apply; we can use language that keeps us accountable to our communities,’ she said.

3. Weaving strong cross-movement connections. FemFund encourages mutual learning between its grantees and a localised exploration of what feminism means to them. ‘We often find ourselves alone with our problems; not everybody wants to talk about women’s rights,’ said Maya from Brave Girls, a young feminist group based in Wałbrzych (southern Poland). Brave Girls has built a network of feminist girls through exchanges with activists from other cities. Maya shared that young people she knew did not initially understand the Black Protests in 2016, when thousands of protesters rallied against the tightening of abortion laws. FemFund introduced Brave Girls to Abortion Dream Team, and Maya noted that through linkages of this type, young feminists have found that ‘being a woman doesn’t mean you have to be scared’.

Informal groups demonstrate openness to innovate and engage with a wide range of people. The Earth Association, which assists women refugees in Lublin (eastern Poland), has recently launched a Women’s Meeting Club to promote refugees’ economic independence. Ewa from the association welcomed the diversity of women-led groups she had met through FemFund. ‘FemFund works with many different groups and issues,’ said Ewa. ‘Rural organisations like ours are often excluded’.

According to FRIDA – the Young Feminist Fund’s latest research on the evolution of feminist organising, unrestricted funding enhances the autonomy of feminist groups while giving them freedom to shape their own trajectory of growth. As donors, we need to consider the mechanisms through which we reach informal groups and integrate that lens into our grant-making.

For a donor like SRT, we know that this means re-granting to local feminist grant-makers. FemFund and its grantees reiterated that ‘feminism in Poland should not be dependent on projects.’ We agree and we will continue to invest in feminist funds.

Bethan Cansfield and Chiara de Luca are Programme Officers at the Sigrid Rausing Trust. The authors would like to acknowledge the contributions of the FemFund team and their grantee partners.