Realising a seismic shift on climate action through philanthropy

As the implications of the recent election settle and Anthony Albanese is sworn in as Australia’s thirty-first Prime Minister, we at the Australian Environmental Grantmakers Network have been reflecting on what this means for climate and environmental philanthropy. 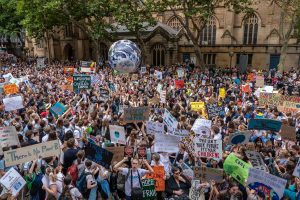 Students in Australia protest for action on climate change in 2019. Photo credit: Shutterstock

While much remains to play out, it’s clear that the election result was a vote for climate action.

It is also important to note that the election result will take Australia on a path to achieving the aspirations of Aboriginal and Torres Strait Islander people as outlined in the Uluru Statement from the Heart.

So many individuals and organisations put countless hours and energy into getting Australia to this new point. This includes the climate and environment movement, which has demonstrated tenacity, strategy, and the capacity to keep learning and adapting. The movement embraced individual and group action but also managed smooth and robust coordination that is not easy to achieve in any sector let alone a diverse and lean charitable cohort.

Behind the scenes of this nationwide movement were an army of volunteers, grassroots groups, experts, scientists, and strategists calling for change. Alongside them were many philanthropic funders who, as a collective group, became more strategic, cohesive, smart, and willing to take on policy advocacy and ensure conditions were right in the community so that this was a community-led demand for change – for a better climate future.

They supported long-term projects to boost youth participation and engagement in the federal election, built support for renewable energy in crucial seats and a just transition plan for workers in Western Australia. They funded projects that foster bipartisanship in climate politics and a greater understanding of our climate transition path, including new jobs and economic opportunities. In election week, Green Music Australia’s ‘vote for the planet’ campaign was fully funded in a day. Alongside this philanthropy, many individuals supported political candidates and parties, and thousands of individuals from across Australia funded the Independents directly or via Climate200.

We of course can’t write about this election without acknowledging the independent candidates who have stood up for more ambitious climate policy. With the courage of their convictions and the support of their communities, they achieved something momentous for action on climate. The successful candidates also mobilised thousands of volunteers, speaking to the power of community organising to channel discontent into action.

It seems to us that young people, women, and many others are now more engaged than ever in our precious democracy and this election has helped them understand that they can effect change.

But the job is not done yet.

This election result gives a clear mandate for the Federal Government to act on climate. But we know from hard-won lessons that a change of government doesn’t necessarily mean that the climate and biodiversity crises go away. While the new government has a better climate agenda than the Morrison government, it still falls short of achieving what’s required for a safe climate.

The challenge for funders now is to keep working with partners and the charitable sector to make sure the Government’s climate agenda is improved upon and actioned quickly – and to make sure it sticks. So, what actions can you take to this end? Here are a few ideas:

To understand more about the climate and environmental commitments of the new government and crossbench, you can read our election wrap-up at aegn.org.au.

Amanda Martin OAM is the CEO of the Australian Environmental Grantmakers Network (AEGN).