CoF reflections: We need to be able to defend our ground in unsettling times

I’ve been back at work for a couple of days since the Council on Foundations annual conference and have had many opportunities to respond to the ‘How was the conference?’ question. Some of the responses I’ve been giving have ranged from ‘good!’, to ‘George Bush was surprisingly eloquent on the subject of cervical cancer – who would have thought?’, to ‘There were a lot of discussions about racial equity and about advocacy’.

What I haven’t said is that there was something about the conference that felt really different, unsettling even. With some opportunity reflect, to try to name what and why that was, the nearest I can come is to say that the conference was a reflection of the state of philanthropy at this point in time. 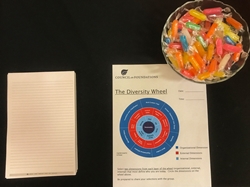 In many ways it didn’t feel like a traditional conference. There were plenaries, but there was also a lot of open space at breakfasts and between sessions that provided those networking opportunities that we all want at conferences.

There were also opportunities to meet in groups of ten with sector leaders or in other small groups to focus on specific topics. There were site visits ranging from an early childhood centre to a stadium. In short, there was a smorgasbord of opportunities so you could have the kind of conference experience you wanted to have.

There are some tradeoffs in this approach – attendees were on different schedules from each other, so it was sometimes hard to get a sense of the whole. However, there were conference tracks, making it easier to go in-depth in a particular area of interest, but also to stay in your own niche. 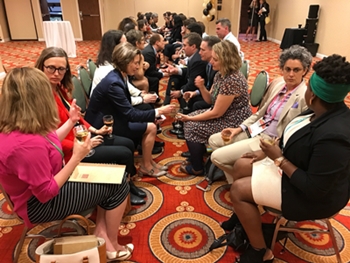 How did this reflect the state of philanthropy? In the daily work of philanthropy, as at the conference, finding common ground and shared space takes time, effort and planning.

We are at a point in history when there are serious threats to the issues that many in philanthropy care about — whether it be arts, public education, civic engagement or affordable housing.

That unsettled feeling arises when we need be ready to defend our ground on our issues, but also need to connect with others on the big picture.

Discussions about the roles of international philanthropy vs. international governments and the importance of a strong civil sector are not just intellectual exercises; these underlie the policy positions being put forward at all levels of government as populism emerges as a political force.

So, on reflection, how was the conference? I had wonderful discussions, was inspired by some of the speakers, and had some new insights. If I were to do it again, I might make some different choices about how I spent my time, but in the end, it was the conference that I chose to have. I left wishing there was more of a sense of philanthropy as a unified field, but that can only come if more people in the field make that choice.

Teri Behrens is Director for the Institute for Foundation and Donor Learning at the Dorothy A. Johnson Center for Philanthropy at Grand Valley State University.

You can find more coverage from the Council on Foundations annual conference 2017 here.