New report: Attitudes have shifted, but funding practices have not

A new study just released by the Center for Effective Philanthropy examines the state of practice in philanthropy, finding that even though foundation leaders’ attitudes about general operating support have shifted over the years, practices have not. 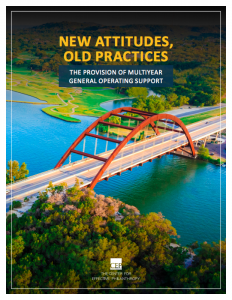 The report ‘New Attitudes, Old Practices: The Provision of Multiyear General Operating Support’ found that while 58 per cent of foundation CEOs surveyed reported that their foundations provide some multiyear GOS grants, they generally do so for few grantees. Only 11 per cent of funders provide multiyear GOS to more than half of their grantees.

CEP’s research did not reveal any common significant barriers for foundation leaders when it comes to increasing their provision of multiyear GOS; but rather found that the explanation seems to be that it doesn’t fit with the foundations approach, simply hasn’t been prioritised, or – for some community foundations – isn’t seen as possible.

The data for the study was collected prior to the onset of the Covid-19 pandemic, which has led to funders pledging greater flexibility. A call to action for philanthropy by the Council on Foundations gathered almost 800 signatures earlier this year, and a similar call in Europe from Dafne and EFC received almost 200 signatures.

Despite these rousing calls to flexibility, a report from the Center for Disaster Philanthropy and Candid analysing support allocated for Covid-19 relief found that few awards were specifically identified as core funding.

CEP will be undertaking research on to what extent foundation practice are changing because of the dramatically changed context following the global events of 2020. The research will be released later this year.