Research: here’s how philanthropy can build and preserve democracy

How might philanthropy better support efforts to build and preserve democracy given the deep-seated and persistent problems of racial injustice and inequity, especially in light of recent elections and societal trends? 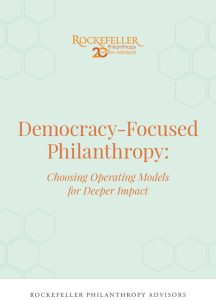 A new report from Rockefeller Philanthropy Advisors seeks to answer this question.

Democracy-Focused Philanthropy: Choosing Operating Models for Deeper Impact was informed by interviews with leaders of ten foundations deeply engaged in democracy-related issues and six experts on racial justice and DEI, as well as desk research on an additional set of more than a dozen democracy funders.

The report explores the various ways philanthropy can support efforts to build and preserve democracy. It also places a particular focus on addressing deep-seated and persistent problems. The research was originally done for the Democracy Fund, but after reviewing the findings of the report and finding them so illuminating, the Fund agreed to release the study to the public.

‘Philanthropy has a crucial role to play in strengthening understanding of the distortions from money and disinformation because otherwise, it’s not going to happen’, one interviewee is quoted as saying in the report.

‘Increasingly, we find, democracy funders are recognizing that they need to listen first and fund later’, another says.

Read the full report on rockpa.org.