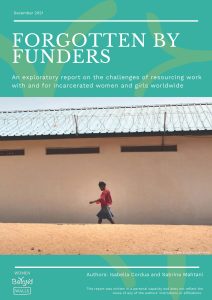 Even donors that identify as women’s rights or feminist funders aren’t resourcing incarcerated women and girls.

That is one of the bleak findings of Forgotten by Funders, a report from the movement-building platform Women Beyond Walls that looks at the challenges of funding programmes to support incarcerated women and girls.

The report, which was produced without philanthropic funding, surveyed 34 organisations across 24 countries on five continents.

Some of the report’s key findings include:

‘Incarceration has a devastating impact on women and their families’, stated the report’s introduction, citing that the rate of self-harm in women’s prisons is higher than in male prisons. It also notes that the majority of women in prison are mothers, and there are at least 19,000 children living in prison with a parent, most often with their mothers.

‘Despite these stark statistics, as this exploratory report highlights, work with and for incarcerated/formerly incarcerated women and girls is flourishing but desperately underfunded,’ the report said.

Women Beyond Walls hopes its exploratory report will start a wider discussion between donors, organisations and women with lived experience of the justice system.