Saudi prince Alwaleed bin Talal’s promise to give $32 billion to charity follows a career of myth-busting high-profile actions from this member of Saudi’s royal family.

Now, his motives are questioned as people digest his announcement to follow Bill Gates’ advice and donate his fortune to charity. The Guardian attributes his gift, in part, to the prince’s desire to make sure the world just how wealthy he is — the prince says his holdings are worth $32 billion; Forbes estimates his fortune at just $22.6 billion. After the prince sued the magazine, the two parties came to an agreement published on the prince’s Kingdom Holding Company website. Others quoted in the Guardian article question whether the prince is trying to curry favour with the West – where he has holdings in banks, luxury hotels other companies – and whether he has political aspirations. 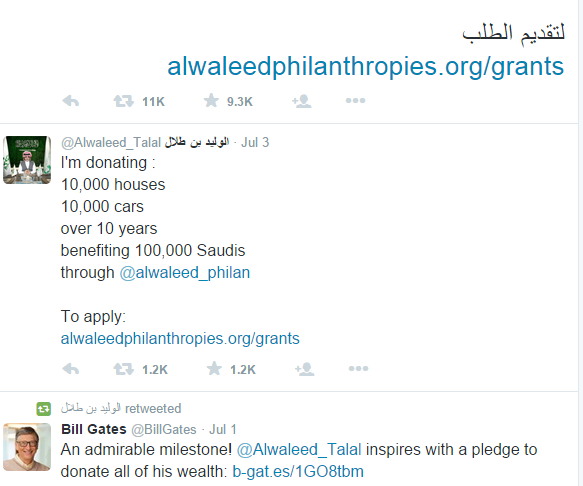 The prince’s foundation, Alwaleed Philanthropies, set up in 1991, finances work on education and community development in Saudi Arabia, and has contributed funds to fight river blindness in Ethiopia and polio across the developed world, according to its web site.

The foundation’s $30 million pledge to polio work is an example of several to projects financed by other grantors, according to the web site, including to Egypt’s Misr El-Kheir Foundation, which has helped to free prisoners in that country and provide business opportunities for them after release.

A long-time supporter of women’s rights, Alwaleed financed training for Saudi’s first female pilot. His foundation provides training to female law students and a host of other programs for women in Saudi, including employment training and guidance in defending themselves against violence, according to its website. The prince says more women than men work in the fund, and his ex-wife, Ameera Al-Taweel, is a vice-chairperson.

Investing his treasure for mankind, awesome!