SDGs: Where do human rights fit in?

729 funders. 20,600 grants. 12,888 organizations. Human rights is a broad field, as demonstrated by the vast data in Foundation Center and the International Human Rights Funders Group (IHRFG)’s Advancing Human Rights research. So it’s no surprise that human rights funders played an active role in supporting civil society’s engagement with the SDGs.

As we learned at IHRFG’s 2016 institute, their work was more than a chance to encourage inclusive consultations and participatory models – it was critical to ensuring the new development goals were rooted in human rights principles.

Thanks to the efforts of coalitions like the Post-2015 Human Rights Caucus, this work largely succeeded. The SDGs acknowledge rights in ways that their predecessor, the Millennium Development Goals (MDGs), neglected to do. But in what way – and how does philanthropy align?

First, it’s explicit.
The 2030 Agenda for Sustainable Development states that the SDGs “seek to realize the human rights of all” and “envisage a world of universal respect for human rights and human dignity.” The agenda is grounded in the Universal Declaration of Human Rights, like the definition developed by the Advancing Human Rights research. But is this commitment captured within the goals themselves?

The SDGs are universal.
Unlike the MDGs, the SDGs apply to all states, whether they are considered “developed,” “developing,” or somewhere in between. This framing acknowledges that human rights concerns don’t disappear when a country achieves middle-income status. 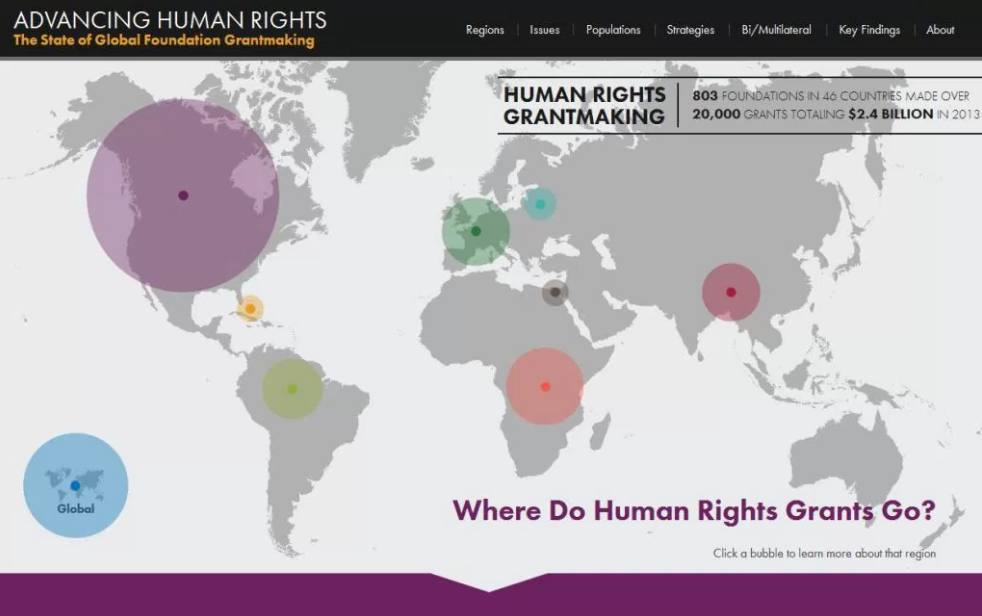 The importance of a universal agenda plays out in areas like health and well-being. Goal 3 lists “universal health coverage; and access for all to safe, effective, quality and affordable medicines and vaccines” as priorities – standards that high-income countries such as the United States still struggle to meet.

Philanthropy seems well aware of the need: according to our research, health and well-being rights was the top area funded in 2014, with over 50 percent focused on North America.

This may reflect a U.S.-heavy data set but also reveals funders’ priorities. Investments to increase equitable access to healthcare in the U.S. comprised a huge portion of the funding.

The SDGs commit to tackling inequality and discrimination.
The theme appears throughout the 2030 Agenda, which explicitly calls out marginalized populations such as persons with disabilities, indigenous peoples, people living with HIV/AIDS, and refugees, migrants, and internally displaced persons.

Goal 5 focuses on gender inequality specifically, another area human rights funding has addressed over the years. Over 27 percent of all human rights grants (and 20 percent of dollars) named women and girls as beneficiaries, more than any other population group we track in the research. This commitment plays out in who makes the grants as much as who is supported: much of the work is driven by women’s funds based in the Global South and East.

The SDGs reinforce existing commitments.
By grounding their targets in human rights, the SDGs may encourage compliance with ongoing legal commitments, ranging from the rights to water and sanitation to access to justice.

Like those existing commitments, however, the SDGs are little more than a pleasant read if they aren’t implemented in development practice moving forward. The human rights community is well positioned to ensure this happens. Over a third (37 percent) of human rights funding in 2014 supported advocacy, systems reform, and implementation. Funders seeking systemic change know that victory doesn’t come when commitments are signed – it is a long-term process, requiring diligent monitoring and advocacy.

Human rights funders and advocates successfully ensured that the SDGs incorporated a human rights lens. Advocates now work to hold governments accountable to those commitments – and it’s up to philanthropy to determine where its support can help fill the gaps. At Foundation Center and IHRFG, we’ll keep working, too, to map the Advancing Human Rights field and inform that work moving forward.

This article originally appeared on IHRFG’s blog on 3 May 2017. The original article can be found here.