Slow progress in Haiti raises questions about use of aid

‘Two years on and you have half a million people still in tents or tarps, some 7,000 dead from cholera and hundreds of thousands more infected.’ This is the damning assessment of Haiti two years after the earthquake, by Ben Smilowitz, head of the Disaster Accountability Project. International donations following the earthquake amounted to over $10 billion, but the slow progress of reconstruction has prompted many both inside Haiti and outside to wonder where the money went. Haitians gave vent to accumulated frustration at demonstrations last month where they chanted ‘UN, go home!’. Needless to say, NGOs have come in for their share of criticism, being variously accused of spending the money on ‘salaries, accommodation and transport for the NGO workers themselves’, as one observer puts it, and excluding Haitians from the decisions made about relief and reconstruction. Prospery Raymond, head of Christian Aid in Haiti, believes that those initiatives that forwarded funds directly to Haitians were the most effective, but this has happened all too seldom. Smilowitz argues that ‘the wrong groups raised the most money in Haiti’ – those NGOs who have ‘incredible brand recognition’ but no capacity in the country. ‘Now is the time for the international community to help Haitians do what they really want to do,’ says Prospery Raymond, ‘rather than carry on with these pre-prepared projects from abroad.’ 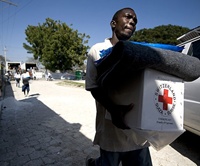 The NGOs have pointed out the sheer scale of the task and the political vacuum – a lengthy and disputed presidential election followed by a five-month delay in forming a government – in which the relief effort has taken place. By contrast, a business-centred approach to the island’s redevelopment, led by cellphone company Digicel and its owner Denis O’Brien, seems to be gaining ground. The company has rebuilt 50 schools since the quake and has pledged to build another 80 by 2014. ‘If you make money in a poor country, you can’t just take it and disappear,’ says O’Brien. ‘It would be bad business.’ The company has invested $600 million in Haiti, making it by far the country’s largest foreign investor. In November, Bill Clinton, UN Special Envoy to Haiti, opened an industrial park in the Caracol Valley. The first tenant is Sae-A, a Korean clothing manufacturer, which is building a plant that will employ 20,000, the plans of which incorporate housing developments and other infrastructure.