Spend down to have more impact, says new report

The Center for Effective Philanthropy (CEP), an organization focused on the development of data and insight to enable higher-performing funders, have released a report which shows that most foundations planning to spend down are motivated by a desire to have greater impact. 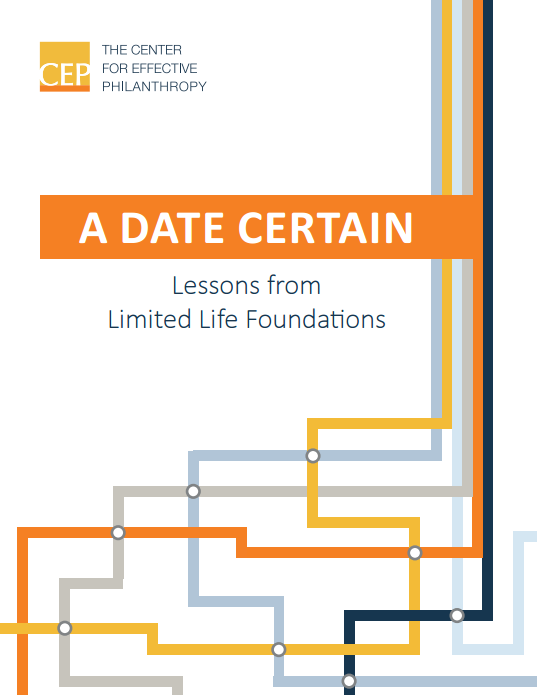 Based on interviews with 11 leaders of foundations that are planning to spend down by 2026, CEP found that currently one in 10 large foundations are limited life foundations.

Foundations left 10 to 25 years between the time they made the decision and the date they close their doors.

CEP looked at nine key areas to gain insight on how and why foundations spend down: why spend down, investing, staffing, grantmaking and strategy, what foundations owe their grantees, collaborations, communications, evaluation, and archiving knowledge.

The report found that many foundations were motivated to spend down by donors who wished to see an impact during their lifetime as well as to generate more significant impact on the world’s most pressing issues, such as sustainability.

Many foundation leaders said the decision made them more strategic, giving them a greater sense of focus and urgency.

For many, the decision to spend down led leaders to put more effort into seeking out collaborations with other funders. According to Ruth Hennig of the John Merck Fund, which plans to sunset in 2022, ‘we would like to see some foundations decide that they want to work on the strategies or the set of objectives that we’ve developed.’

The attitudes and plans for evaluation differed widely across the foundations interviewed. Some foundations increased their emphasis on evaluations to more effectively reach goals and to leave the field with better knowledge of what worked and what didn’t.  However, other foundations were uncertain about the relevance of evaluations due to their limited lives.

Many of the foundations did, though, express the desire to archive knowledge to share what the foundation has done and learned over time.

In terms of what foundations owe their grantees, some felt a responsibility to ‘do no harm,’ while others hoped to leave grantees better off by equipping them to be more resilient.

The issue of limited life foundations has become more prominent following the announcement that Atlantic Philanthropies will close its doors in 2020.

Amanda Aguilar is a student at the University of California, Davis, and is currently an editorial intern with Alliance.