Striking commonalities between countries where philanthropy is still emerging

The event began with panellists outlining the main trends in philanthropy in the regions in which they work. Videos of the full presentations from each speaker can be found on our social media, but we have included just a few points from each below.

Chertok spoke of the implications of the Russian government’s campaign against foreign donors for NGOs within the country and the need to overcome the division between philanthropy and civil society that currently exists. Fabiani also referenced government regulation when she said that Brazil is only 83rd in the world in terms of giving, despite being the 11th country in terms of millionaires. Batra and du Toit both mentioned that many international donors are leaving their countries; Batra says that in India international funding has dried up for a number of reasons, including an increasing view that India’s rich should be giving for their own country’s development. Batra also touched on the shift in giving trends in India as philanthropy gains increasing interest among young people, with methods such as payroll giving becoming popular. Prabhu outlined some of the motivations among her clients for increasing their giving and the emergence of more strategic approaches.

Despite the fact that the discussion demonstrated how philanthropy is at different stages of development around the globe, there were also a number of striking commonalities. One of the most interesting points in the discussion was when each panellist stated what they think is the key driver for the development of philanthropy in their country and what is the main barrier. Interestingly, citizenship and an awareness of social need were said by all to be the main motivation for giving. Fabiani also mentioned a wish among Brazilian philanthropists to make their wealth have greater significance, while Batra mentioned that many in India see improved education, health and livelihoods as a way to drive economic growth.

When considering what hinders the growth of philanthropy, both du Toit and Chertok cited a lack of trust as the main barrier to philanthropy in South Africa and in Russia. Fabiani said that the legal framework in Brazil, with its lack of tax incentives, did not encourage people to make donations. Batra’s response, which was backed up by Prabhu’s experiences with clients, was that many donors are concerned about sustainability and what impact their money is achieving.

This wish for stronger NGO regulation and accountability in India is the result of increased engagement from Indian donors with the causes they support. Prabhu said that the UK is viewed as an attractive place to establish foundations because of regulations which create a level of transparency that is not yet available in many emerging market countries. The legal framework in these regions has not kept pace with growth of philanthropy, leading many to look overseas for independence and stability when structuring their giving. It was noted that the lack of tax incentives for giving in both Russia and Brazil is also a clear reason why philanthropists from these countries may work through offshore accounts.

As well as legal regulations, there are also social and political considerations which may affect how philanthropists give in these regions. Funding for social justice was said to be challenging in many countries and is one area which often relies heavily on donations from overseas. All panellists indicated that most donors would be wary of funding controversial causes. With the heightened political risks in Russia, Chertok said that the only hope for radical funding from within the country is crowdfunding. Supporting social justice programmes is one of a number of ways in which foreign donors can make an impact in these regions.

There was a consensus among panellists that one of the best ways that those from outside the country can support regions where philanthropy is still emerging is by developing infrastructure and capacity. Fabiani said that foreign funding which develops partnerships so that Brazilian organizations can learn from more established programmes would be of great benefit. Bringing in evolved impact evaluation and encouraging a long-term vision could help emerging philanthropists become more effective. In areas where foreign aid is reducing, Chertok too stressed the need to support philanthropy infrastructure, emphasizing that funding to Russia is so difficult that it has to be worth it. Batra emphasized that foreign donors should exit strategically, while du Toit said that progressive international donors in South Africa are putting mechanisms in place to continue work when they leave.

However, despite the challenges of developing supportive legal frameworks and increasing the capacity of organizations within these countries, philanthropy is much in evidence. Chertok said that Russia is a classic example of how much people can give out of pure generosity, while countries such as Brazil and South Africa have a strong tradition of community giving. The desire to address social needs is much in evidence, but there is still work to be done in terms of increasing trust and developing effective regulation. 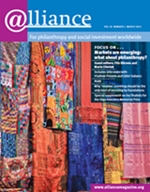 This event was held following the publication of a special feature on philanthropy in emerging market economies in the March 2013 issue of Alliance magazine, which also includes further facts about philanthropy in these countries.

Those interested in this topic may also wish to attend the Future World Giving event held by Charities Aid Foundation on 24 April 2013 in London. This will ask the question: How can governments help to build public trust in charitable giving? Further information can be found at http://www.cafonline.org/events/for-donors/government-build-trust-giving.aspx.