A new report from the Casa Socioenvironmental Fund in Brazil shows that when grassroots groups are empowered to see themselves as protagonists of the work to transform their communities, the change that occurs is better suited to the local neighbourhoods. The publication, ‘Strengthening Communities to Build Inclusive, Resilient, and Sustainable Cities’ explores insights generated by the Casa Cities Program, a project based on the recognition of the importance of grassroots work. 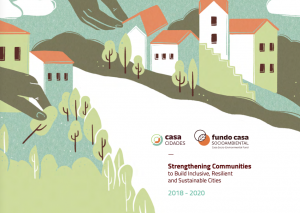 ‘The greatest value of this Program was democratizing access to funds and making sure they reach grassroots groups,’ reads the report, regarding the Casa Cities Program.

The report found that for grassroots-led projects, women assumed a leading role in managing and executing the projects over half of the time. It also found that the projects directly benefitted young people and children in 80 per cent of cases.

The Casa Cities Program also showed the power of small grants to generate big results – in more than half of the projects, seven out of the eight objectives were achieved. The projects supported by the Program were also highly resourceful, with over 80 per cent mobilising resources beyond the initial grant such as obtaining space for free, receiving property donations, and raising additional funds during project execution.

The Program was formed with SDG 11 – making cities and human settlements inclusive, safe, resilient, and sustainable – and SDG 12 – ensuring sustainable production and consumption patterns – as a part of its conceptual framework.