The effects of digital systems on giving

Digital systems like mobile phones and networked computers make it ever easier to ask for money and to give it – possibly even too easy, as the Scrooge-like feeling I recounted having at the opening of this book reveals. It should make it easier to track donations, as every online transaction is recorded, whereas we lose track of the coins and bills that we drop in a basket or hand to someone on the street. Ironically, because so many of our online donations are made on proprietary systems such as GoFundMe, the public doesn’t have access to this data. 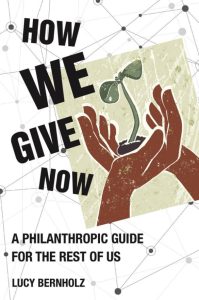 Online giving has also helped blur the lines between giving to nonprofits, for-profits, individuals, or politics as each of these options looks basically the same on a crowdfunding platform. This may be another reason that the tax code, which has played such a big role for nonprofits seems to be less and less important to givers.

From donating online to donating cryptocurrencies like Bitcoin, the last decade has seen an ever-expanding dependency on digital tools for giving time and money. One mapping conversation participant noted, ‘I do give money to people on the streets sometimes. But I rarely carry cash anymore.’ This point was brought home to me on a subway ride not long ago. As happens on subways everywhere, a person came pushing through the doors between cars as the train was moving. As he walked through the crowded car asking for money, he repeated himself, ‘Need a dollar, please. Help me out. I’ve got Venmo. Need a dollar, please. I take cash and Venmo. ‘

For some people, the digital underpinnings of giving are just assumed. It’s stranger for them to use cash (for anything) than to be impressed with the ability to give via text message or inside of a gaming platform such as Twitch. For others, online tools are the exception, not the rule. But anytime – and every time – there is a digital technology involved, we face the question of what happens with the digital data.

This assumption of digital facilitation – and dependence on it – is important. Among other things that digital transactions enable is (some) visibility into actions that are harder to see when they happen offline. People put dollar bills into collection boxes every week, but tracking those dollars is hard – either from the perspective of the giver or the recipient. Making a donation online (or via phone, via messaging app, or on a crowdfunding or gaming platform) leaves a trail. The giving isn’t necessarily new, but the act is more visible to researchers, to outsiders, and, of course, to the organizations (usually companies) that own the digital platform on which the action occurred.

The last decade has seen an ever-expanding dependency on digital tools for giving time and money.

The ways we give online, especially the growth in crowdfunding, raises questions about how much the tax code and (c)(3)s and (c)(4)s matter to people. Some significant portion (again, we can’t get the data) of crowdfunding ignores these structures all together. Five years ago, 75 per cent of American taxpayers didn’t benefit from charitable tax deductions. The 2017 changes to the law made charitable exemptions irrelevant to more than 90 per cent of all tax filers. Tax privileges associated with certain behaviours are not a meaningful criterion for how most of us decide to give.

While tax benefits may not actually matter to people’s pocketbooks, the categorizations of nonprofit and tax-deductible still have a strong grip on our collective idea of where good gets done. The value of the tax status of certain nonprofits is not in the financial benefit it provides to most of us as givers but in the signal it theoretically sends regarding purpose and trust. There is an aura of trust associated with nonprofits; we tend to equate them with using money for good and not for profit. But long-term measures of trust in nonprofits show it to be declining, a result of both scandals among nonprofits and a concerted effort by commercial businesses to associate themselves with good causes.

This is an excerpt from How We Give Now: A Philanthropic Guide for the Rest of Us by Lucy Bernholz, © 2021 Massachusetts Institute of Technology.

Lucy Bernholz is a Senior Research Scholar at Stanford University’s Center on Philanthropy and Civil Society and Director of the Digital Civil Society Lab and the author of How We Give Now: A Philanthropic Guide for the Rest of Us.

Tagged in: Next Philanthropy