The Evolution of Philanthropy: The Story Told by the People Behind the Mission

Council on Foundations and Brandolon Barnett

Each year for nearly 30 years the Council on Foundations has conducted an annual Salary & Benefits survey. The survey produces a trove of data on that vital force at the core of the practice of American philanthropy: the people who carry it out. The 2015 data is as robust as ever. Included are responses from 951 American foundations representing over $279 billion in assets and over $16 billion in grants. Taken together, the data represents $923 million in salary & benefits from over 9,000 full-time employees at foundations all across the United States. 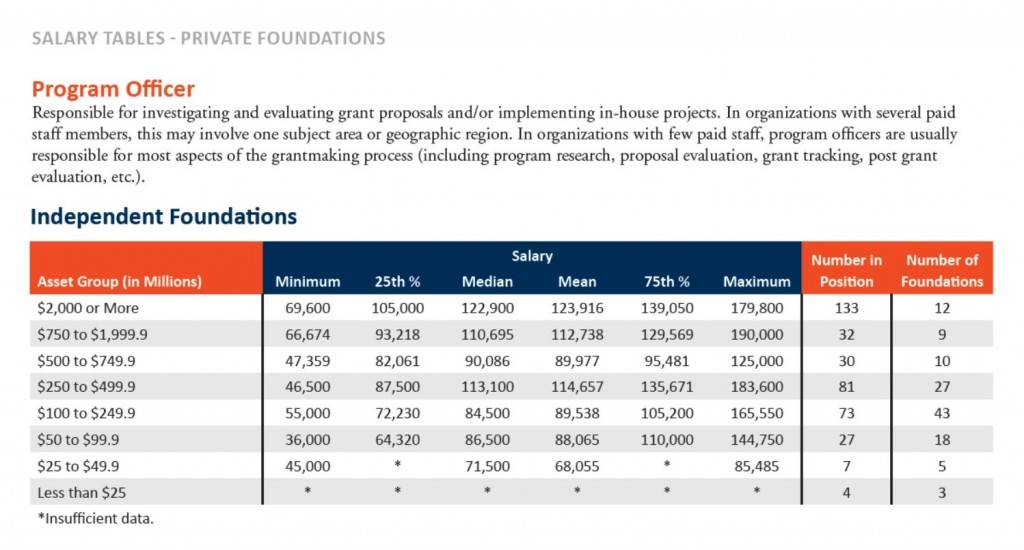 A look at the compensation of Program Officers at Private Independent Foundations from the 2015 Salary Tables. The full Salary Tables release includes 189 pages of tables and data on compensation for 35 positions at Foundations of all types by asset size, foundation type, and geographic region. The full report can be accessed on the website of the Council.

In an era of big data and analytics, a salary & benefits survey can at first blush seem a little less than exotic endeavor. Yet beneath a bedrock of data fulfilling a steady demand for practical benchmarking, there lies a set of insights that can both create and tie meaningfully into conversations around how the “business of doing good” is being carried out by U.S. grantmakers.

The most obvious example in the last 30 years would be the rise of technology. In the 1995 iteration of the Council’s Salary & Benefits report only 2% of Community Foundations employed a full-time “computer professional”. A greater percentage employed full-time librarians! By 2000 that figure had climbed to 14% and within the Council’s data, Director of Information Systems positions began to proliferate. In 2015, among survey respondents a full 22% of American community foundations employed a full-time Director of Information Systems or other Computer Professional.

That year over year growth quantifies the tidal wave of technologies impacting the everyday practice of philanthropy. It also serves as a reflection of changes evident beyond the numbers represented in the Council’s salary tables.

The question then becomes: “What’s next”? With increasing scrutiny, perhaps organizations begin to hire full-time fraud investigators as has been suggested is occurring to some degree within the international NGO space. Or perhaps mergers and acquisitions lead to a proliferation of full-time M&A positions at larger community foundations. The possibilities are endless, but the implication is clear that data on who is working within philanthropy – i.e. what positions are seen at grantmakers of different types and sizes – can paint as compelling a picture as the salary levels themselves.

The data also paints a portrait of the state of gender and racial diversity in American philanthropy. For example, in 2014 women comprised 76% of all reported full time positions and 77% of CEOs among grantmakers with less than $5 million in assets. Yet for respondents among foundations with assets of $100 to $250 million, the share of female CEOs fell to 50%. Among respondents with over $1 billion in assets, women made up just 28% of CEOs.

Despite this greater gender diversity at the highest levels for smaller foundations, there is a different story around racial/ethnic diversity. The 2014 results found for example that grantmakers with $2 billion or more in assets reported that 36% of full-time staff positions were filled by minorities. In contrast the study found only 27% for respondents with less than $5 million in assets. When examining the diversity of program officers and CEOs, 32% of program officers and 8% of CEOs were minorities amongst the entire pool of responses. Yet for foundations with $1 billion or more in assets, 45% of program officers and 21% of CEO positions were minorities. With the D5 Coalition and other efforts at promoting diversity in the field well under way, this data provides fascinating insights that are vital to conversations within the philanthropic space.

The Council is keen to explore these and other questions further in a 2016 report on diversity in American philanthropy. As the Council moves together with philanthropy into the future, this alert and questioning use of data is vital to our conversations around how to ensure the greatest impacts of our efforts. Many of us are having these conversations on twitter, on blogs, in the pages of traditional news and niche publications. We’re seeing it play out at conferences, in new partnerships, and in meetings. Philanthropy needs to continue to innovate. To that end, the data represented in the Council’s operational research (both the salary and benefits survey and our annual survey of investment performance) holds immense potential to impact those conversations. It is potential that I for one am excited to continue to unlock.

Brandolon Barnett is a research associate at Council on Foundations.