The future of philanthropy: A view from Russia

The Center for Philanthropy Development’s paper on the future of philanthropy attempts to produce a credible forecast of that future by documenting key current trends. 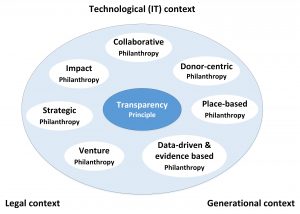 Future of philanthropy: areas of consensus

The study was based on an in-depth literature review which consisted of the following main stages. In the first stage, the preliminary exploration, we identified over thirty publications that included either a description of trends in philanthropy or a forecast of its future. Surprisingly, the number of such publications available online in English turned out to be rather limited. Analysis of these publications showed that despite the diversity of views on the future of philanthropy, the clusters of common themes that emerged indicated a level of coherence amidst the diversity. Second, we selected a number of key sources (26 from the years 2015–2019) on the future of philanthropy that presented the opinions of recognised experts in the field whose credibility is based on their own thorough research backed by reputable institutions. Our analysis of these selected publications revealed several areas of agreement about the future characteristics of philanthropy. We provided an overview of each of these common future characteristics drawing mainly on the selected publications, but using additional sources when needed. When those areas surfaced in more than 30 per cent of the publications, we regarded it as a consensus.

The trends and characteristics we identified all fit into one of three categories:

So which of the trends met our 30 per cent-consensus criterion?

How do these trends apply to Russia?

We had several discussions of these findings with philanthropy experts in Russia to explore the implications for domestic practice.

The need for greater transparency was highlighted as an important core value among discussion participants, and appears to be a national trends in philanthropy development.

An important arena of practice particularly challenging to Russian philanthropists is collaborative philanthropy. While it is clear that complex, interconnected social challenges require collective approaches and coordination for greater efficiency, effectiveness, and impact, there has been little increase in collaborative giving by foundations, such as donors aggregating or pooling their capital to focus on specific shared goals. In contrast, giving circles and crowdfunding are expanding rapidly and are very well accepted in Russia.

Alexey Kuzmin, Ph.D. is an international consultant and trainer specialised in the areas of program evaluation and organisation development.

The Future of Philanthropy: the key trends. Meta analysis of forecasts was commissioned by the Center for Philanthropy Development at the Vladimir Potanin Foundation.

For more on philanthropy from Russia, check out the Russian Donors Forum, which is running this week from 19-23 October.

Tagged in: Next Philanthropy