The June 2013 issue of Alliance magazine 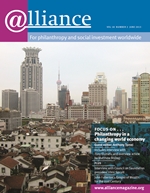 The special feature of the latest issue of Alliance magazine looks at philanthropy in a changing world economy.  Following the collapse of Lehman Brothers in 2008, the world has seen significant changes and a shift in economic power. This special feature looks at the effects that this has had around the globe, how philanthropy has responded and what this could mean for the future.

Guest editor Anthony Tomei, former director of the Nuffield Foundation, writes that three key themes emerge from the articles in this issue: the need for philanthropy to address growing inequality; a tendency to see philanthropy in terms of investment rather than grantmaking; and the need for cooperation and partnership, especially with government.

This special feature considers the impact that a changing world economy has had around the globe, looking at many different regions and perspectives.

From Europe and North America, Luciano Balbo and Massimo Lanza consider Italy’s growing social problems, Foundation Center president Bradford Smith talks about how foundations are beginning to change the way they use their resources and Richard Jenkins suggests an alternative to perpetuity or spending out for foundations.

Other subscriber articles in this issue include: an interview with Council on Foundations president Vikki Spruill; a discussion of the need for balance between rationality and compassion; and a look at the future of venture philanthropy in Europe.