The rise of Chinese tech philanthropy: Domestic and international development

More than in any other country, China demonstrates how philanthropy surfaces, when billionaires exist. Since the opening up of the Chinese economy in the 1980s, the country has become home to some of the wealthiest individuals in the world. Although the Chinese philanthropy sector is still nascent: China’s first Charity Law was implemented only in September 2016, the scale of donations has been skyrocketing with estimates placing its total value at $23.4 billion USD in 2019.

The global landscape of China’s Official Development Assistance (ODA) is undergoing rapid transformation. The private sector is now an equal partner in the traditionally public dominated aid model of OECD donors. Simultaneously, independent corporate philanthropy is on an unprecedented rise, with China leading in many different ways.

Charitable activities within China have ranged from initiatives focusing on environmental conservation and poverty reduction to discussions relating to the strengthening of the public welfare system. Within the growing list of philanthropists, tech philanthropy is leading and notably expansive in its outreach, both within China and internationally.

The rise of China’s tech philanthropy is unprecedented and represents a transformative approach to doing business. Building on the network effects of digitisation and implementing crowdfunding at every segment of highly integrated tech platforms, these companies are changing the landscape of individual and corporate donations.

Wechat, attracts over one billion monthly users, who have a choice to donate through yet other apps focusing on gamification and interactive donation sessions. Wechat mini-games allow users to play and donate simultaneously while Video chat apps such as Weishi enable live donation encounters with celebrities. Finally, WeChat Payment offers users a choice of donating a percentage of their transactions to charities at every exchange.

Once a year, Tencent and Alibaba also become charity leaders by hosting three-day events, in which users of the platform, at all levels of the distribution, merchandising, advertising and consumer chains can donate towards a themed cause. Similar to the Gates’ Giving pledge, Tencent pledges to match the donations by individuals and corporations. The latter includes both domestic and international businesses such as FAW Group and L’oreal. Additionally, other internet companies such as TongCheng are involved, enabling several platforms to serve as integrated charity hubs, transforming users at every level into donors.

China’s Official Development Assistance (ODA) model is highly centralised: grants, concessional loans and corporate investments are blended together. State-backed finance and subsidies for domestic companies support the internationalisation of Chinese capital with similarities to Japanese ODA in the 1990s. Accompanying this model of development assistance is the rise of philanthropic donations from corporate foundations.

Once again, this assistance is strongly focused on technology and digitisation. The COVID-19 Pandemic Assistance package by Alibaba Foundation and Jack Ma Foundation is a striking example. With a dedicated funding amount of 3.3 billion RMB ($4.7 million USD), Alibaba’s rescue package for developing countries combines medical expertise with digitalisation, using the platform’s ability to combine e-commerce, with physical supply and distribution chains. 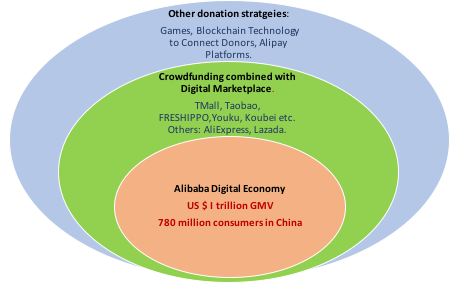 Just like Tencent, Alibaba uses the skills and niche specialisation of its many subsidiaries and independent platform businesses such as 1688.com, Lazada, Tmall Global and Tmall Supermarket, to procure medical supplies. Using its logistics company, Cainiao Network, Alibaba transported medical supplies to some Chinese provinces and other countries. Tech philanthropy by Alibaba is not simply about using the power of digital platforms but also involves knowledge dissemination. The Jack Ma Foundation and Alibaba Foundation were the first to launch a handbook, which detailed research and best practices, related to the control of the COVID-19 pandemic in March 2020. The handbook was one of the earliest, open-source repositories of information dealing with the nature of the current pandemic.

One way of understanding the international move towards China’s platform philanthropy is to see it as an extension of its tech platforms’ on-going internationalisation efforts. Strong emphasis on strengthening Small and Medium Enterprises (SMEs) has been a widespread global strategy used by platform behemoths and their subsidiaries. For example, the German e-commerce company Daraz, which was acquired by Alibaba in 2018, expands its platforms by providing online educational portals for users interested in setting up digital ventures. Daraz serves 25 million users in three South Asian countries, combining e-commerce, with its own logistics company.

Dr. Farwa Sial is a Post-Doc Research Associate- ESID at the Global Development Institute (GDI) at the University of Manchester.