The sum is less than its parts: what social entrepreneurs can learn from fundamental physics

Most social entrepreneurs and their funders believe they can create exponentially greater social value by ‘scaling’, be it expanding into a new geography, serving new types of beneficiaries, or adding more options to their ‘service menu’. The standard conviction is that the more services we can coordinate and align within an organization or consortium, the greater our social impact. As the chair of Global Fund for Women told Alliance Magazine, their merger with another organization was ‘a matter of multiplication not addition’. In short, we assume that the ‘sum is greater than its parts’.

Of course, any organization needs a certain amount of scale to invest in R&D and thereby remain relevant to the evolving demands of its stakeholders. But the numerous examples of private sector M&A that invariably destroy value rather than creating it, or grow headline revenue but shrink return on equity, point to the limits of scale. In fact, fundamental physics suggests that the sum is never greater than its parts.

Lessons from the physics lab
The idea of ‘entropy’ is connected with the fact that every change made to a physical system of interacting objects will waste energy. This is encapsulated in the Second Law of Thermodynamics, which implies that the only way to maintain a constant amount of usable energy in any given system is to add energy from a source outside the system.

In other words, if we change how a certain group of objects are aligned within a physical system to make it more ‘efficient’ in some way, there will be a net loss in total usable energy in the system. I suspect this (scary) insight from fundamental physics can be applied to social entrepreneurs’ attempts to create ‘social value’ – namely, sustainably positive change in the lives of individuals and communities.

So, in line with the concept of entropy, I propose two social corollaries to the 2nd Law of Thermodynamics.

There are some important caveats to the logic linking usable physical energy and potential for social value.  But if valid, my corollaries have far-reaching implications.

Efficiently seeking impact
The first implication is that organizations will always deliver returns on scale that are at least diminishing if not negative. This is illustrated in the chart below, modelled on the economic ‘law of diminishing marginal utility’. 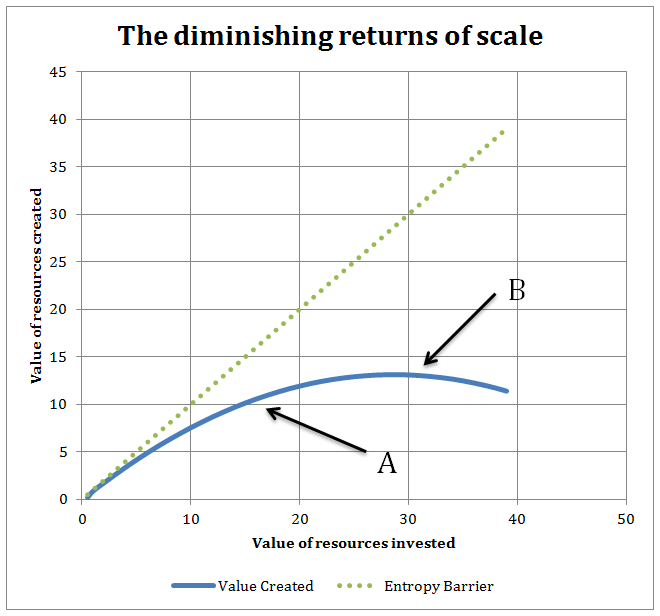 The blue line depicts how much ‘social value’ an organization can create from the resources available. As per my second corollary, this blue line shows diminishing marginal value: at point A, every additional unit of resources invested creates less and less additional value. Then, point B is the moment when diseconomies of scale outweigh economies of scale, and the amount of value created by an organization actually goes down. This is the crux of the Locality argument. Careful impact measurement that incorporates all externalities and negative outcomes is central to identifying this point.

The second implication is more fundamental: the blue curve of value created by an organization can never breach the green ‘entropy barrier’, which is the line where ‘value created’ exactly equals the ‘value of the resources invested’.

So what does this mean for the behaviour and ethos of social enterprise?

A revival of older-fashioned values
If social entrepreneurs and social funders truly care about sustainability and conserving resources where possible, we should respond to the 2nd Law by partly reviving old-fashioned values of simplicity and prudence.

Simplicity – to ensure we don’t seek more scale than necessary, and keep as close to the ‘entropy barrier’ as possible. But our empathy for others in need demands we do something rather than nothing. So we also need prudence – to help us be brave enough to invest for scale without tipping over into a foolhardy wasting of limited resources.

Social enterprise needs to combine empathy with science, and temper passion for growth and innovation with the virtues of simplicity and prudence. In this way can we temporarily buck the long-term dictates of the 2nd Law of Thermodynamics and work as efficiently as possible for society’s benefit.

Rohan Martyres is Head of Impact & Investment Strategy at CAN, a UK social enterprise and impact investor. This is an abridged version of an article available here.