The unsung heroes in peace building

We live in an era of disruption. Nearly 70 million people are displaced worldwide – the highest number ever recorded – while violent conflict has reached a 25-year high. Hate and polarization are rising even in longstanding democracies, like the United States and India. Peacebuilding is needed now more than ever.

In 2017, violence cost the global economy $14.8 trillion, according to the Institute for Economics and Peace (2018). This figure, while staggering, understates the full extent of the problem. Wars, crime, extremism, corruption, poor governance, and other conflict dynamics wipe out development gains and destroy lives. In 2016, the International Monetary Fund concluded that ‘Syria’s civil war has set the country’s economic, social and human development back by decades.’ Meanwhile in Venezuela – a country which the World Bank classified as upper middle income in 2014 – the murder rate is now the second highest in the world, according to the UN, while the New York Times recently reported the country’s economic collapse to be the worst recorded outside of wartime in over 45 years.

Despite such dire developments, peacebuilding, which aims to address the causes of violent conflict, receives only a sliver of government assistance—less than one per cent of US foreign assistance. As the CEO of the Alliance for Peacebuilding (AfP), I am acutely aware of this shortfall. A recent AfP survey of our global peacebuilding network identified funding diversification as a top priority challenge. As the Peace and Security Funding Index concluded, ‘Peace and security funders do a lot with a little.’

While peacebuilding receives only a fraction of private donations, these resources are critical and offer unique benefits. Fourteen percent of foundation grants for peacebuilding go to general support, giving much-needed flexibility to sustain organizations. Without this critical funding, peacebuilding organizations could work only on short-term projects driven by government donors.

It can take years for government donors to assess, design, tender, and fund a project. In contrast, private donors can move quickly to fund ideas. Nimble funding is essential to address conflict dynamics that cannot wait years for action on the ground. At the same time, greater coordination among private donors is needed to leverage rather than duplicate established programs.

Further, private funders support risk-taking, benefitting the field as a whole. For example, AfP’s Learning and Evaluation (L&E) work, funded by GHR Foundation and Carnegie Corporation of New York, addresses one of the greatest challenges to the peacebuilding field: the lack of collective data to prove effectiveness. Thanks to philanthropic support, AfP has been able to build L&E capacity; empower peacebuilders to capture high-quality, actionable data; and encourage the field to become more evidence-based, ultimately delivering greater impact in terms of lives saved.

Private donors deserve huge gratitude for their steady help. In recent years, the strongest supporters of peacebuilding have been the Carnegie Corporation, the National Endowment for Democracy, and the Foundation to Promote Open Society, although many others have played pivotal roles carrying new ideas forward. Humanity United recently partnered with AfP and 17 other peacebuilding organizations to launch +Peace, a coalition that aims to make the case for peace to policymakers, politicians, and the general public. Collectively, private funders are unsung heroes in the peacebuilding field. We need their heroism now more than ever.

Uzra Zeya is CEO and President of Alliance for Peacebuilding 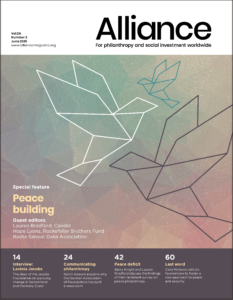 Peace-related philanthropy, at less than 1 per cent of all grantmaking, seems irresponsibly small given that armed conflict spoils lives, divides societies and ruins economies.

Our new issue goes in search of philanthropy’s role in peaceful development.