Nigeria ranks as the fifty-eighth most vulnerable and the twenty-second least ready nation to adapt to the threats of climate change, a degree of unpreparedness which was already in evidence in the confusion following the drying up of Lake Chad, which shrank to 1,500 square kilometres from over 40,000 square kilometres four decades ago. While many Nigerians recognise this – and while a number of philanthropic organisations are engaged in climate change activities – wealthy Nigerian philanthropists have on the whole failed to rise to the challenge.

There is a widespread public realisation of the need to take preventive actions and adaptation measures to avert catastrophe for a nation whose population is predicted to rise to 400 million by 2050. The activities of philanthropic organisations to counter this take two forms: responding to the immediate crisis, such as planting thousands of trees, and sensitising Nigerians about the ecological and economic effects of climate change. 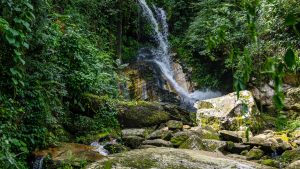 Many philanthropic institutions have undertaken initiatives that embrace both forms. The Dangote Group and the Nigerian Conservation Foundation have begun a tree-planting campaign that aims at the preservation of the environment as well as raising awareness of the need to do so. Using volunteers, they planted trees at designated school premises to mark this year’s Environment Day.

In recognition of the challenge facing the nation and the inability of Nigerians to connect with the problem of climate change, the Shehu Yar’Adua Foundation spearheaded the making of a feature film with inspiring stories to galvanise Nigerians to address the challenges and opportunities of and the solutions to climate change. Translated versions of the film aired on 37 local television stations and reached an estimated 37 million viewers. To combat desert encroachment, the foundation also planted mango and guava tree seedlings in secondary schools at Mulumfashi Local Government Area of Katsina State.

AID Foundation, meanwhile, mobilised its partners to plant over six million trees in Kaduna State, under a project tagged ‘Green Peace’. The exercise also aimed at promoting peace, hygiene and well-being. Furthermore, Keystone Bank partnered with the Nigerian Conservation Foundation on a tree-planting campaign in Lagos State, while Sterling Bank planted about 200 ornamental trees in various locations in Jos, the Plateau State capital.

External philanthropy has been involved, too, with multilateral aid agencies contributing towards these campaigns. Nigeria received $136 million in international climate finance in 2016, more than half of which came from EU grants, $58 million for energy policy development and $40 million for disaster risk-reduction related activities). The country also received $21 million towards a credit system for renewable energy and energy efficiency projects, $5 million for a sustainable fuelwood management system and $3 million for scaling up hydropower. However, confusion abounds over how much of the funds are allocated for philanthropy, who the creditors are and what the terms of the loans are.

The other side of the coin

Despite the initiatives outlined above and the fact that many see the Nigerian philanthropy sector as a growth industry, with many wealthy Nigerians becoming engaged in it, very few of these wealthy philanthropists are investing in climate change mitigation and adaptation.

The reason for this seems to be the distinctive character of African philanthropy which takes a different track from large-scale giving in the United States and Europe. Seventy-seven per cent of philanthropy in a five-country sample went to basic needs, with 42 per cent focused on poverty reduction. Donors seem reluctant to fund issues involving climate change.

It may also be that Nigerian philanthropists are delivering less than they promised. An Oxfam analysis finds that donors fail to provide women farmers with relevant and adequate support to farming and adaptation to climate change, as funding proved significantly lower than commitments made.

Overall, there are some promising steps in the right direction and Nigerian climate change philanthropy can have an important role in tackling the problem, but three improvements need to happen before it can do so:

Adetokunbo Abiola is a Nigerian journalist who writes on climate change, the environment, and social justice. He works freelance as a researcher and field monitor for Environmental Rights Action (ERA) and Africa Network for Environment and Economic Justice (ANEEJ).