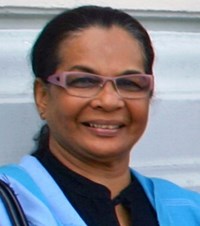 Sithie Subahaniya Tiruchelvam, the founder of the Neelan Tiruchelvam Trust (NTT), an indigenous philanthropic organization based in Sri Lanka, passed away in Colombo on 22 March at the age of 69 following a brief illness. Writing a tribute to Sithie Tiruchelvam is not an easy task as Sithie was an intensely private person. Yet her public achievements, particularly her numerous contributions to social justice causes in her role as the founder of NTT, have to be shared.

The ‘wife of Neelan Tiruchelvam’ is a phrase that has been frequently used to describe Sithie, a corporate lawyer with a deep and abiding interest in social justice, research and the world of ideas, and the arts, since she passed away. However, to those who knew Sithie she was never merely ‘the wife’ of Neelan Tiruchelvam, a constitutional scholar, legislator, peacemaker and institution-builder.

After Neelan’s death Sithie wanted to further the values Neelan worked for during his lifetime and realized that an indigenous grantmaking organization could make meaningful contributions to address existing gaps in responding to the needs of communities. This belief led her to establish the Neelan Tiruchelvam Trust, the only indigenous grantmaker that supports human rights and peace-building work in Sri Lanka. NTT is rooted within the community and has supported catalysts for social change by focusing on community initiatives.

After the Trust was established Sithie dedicated considerable time and energy towards creating an organization that was more than a grantmaker, as she understood that in order to create confidence among partners and grantees NTT had to support their institutions in ways that extend beyond solely funding projects. Hence, with her support and guidance, NTT actively sought and supported nascent community organizations, often in conflict-affected areas, that were engaged in innovative work in difficult circumstances, sometimes in isolation.

Since the aim is to facilitate community organizations to play an active role in rebuilding social networks, as they are more tuned to the ground realities and needs of the population, NTT’s support has included strengthening institutional capacity to enable organizations to become sustainable and access larger donors and broader partnerships. Sithie felt strongly that indigenous foundations have to look beyond the narrow framework within which grantmakers sometimes operate and encouraged NTT to be brave enough not only to extend these boundaries but also to contribute towards redefining these frameworks, for instance by moving beyond using narrow indicators to measure the ‘success’ of initiatives we support. She believed in taking (calculated not reckless) risks in order to invest in nascent organizations that implement innovative projects which larger donors may not be willing to support.

Sithie recognized the arts could be used as a non-confrontational medium for self-expression and discussion of contentious issues in a restrictive environment, and had the foresight to encourage NTT to support such initiatives. To date NTT has supported theatrical and artistic projects that focus on the impact of war and promotion of pluralism and diversity.

Sithie was very passionate about the work of the Trust and held it to exacting standards. At the same time she took great pride in our achievements. She was particularly proud of our Women’s Fellowship Programme, which seeks to enhance the capacities of women working at the community level to increasingly assume leadership roles within families, communities and villages. 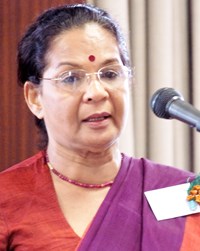 Sithie Tiruchelvam at the FPP launch

NTT’s foray into the global philanthropic sector is entirely due to Sithie, whose efforts led to the Trust becoming a founding member of Foundations for Peace (FPP), a network of indigenous foundations. As FFP members will attest, Sithie was one of the strongest and proudest champions of the network as she appreciated the potential and power of collectives of like-minded people and organizations, not only to support and sustain catalysts for social change but also to function as a source of strength and a security net for indigenous foundations that work in difficult or hostile environments. For instance, the success of our Women’s Fellowship Programme can be attributed to our collaboration with FFP partners, which enabled Fellowship participants to learn from, and share experiences and strategies with, activists working in similarly challenging contexts in other countries.

Sithie was a spirited, strong woman who did not mince words and was not afraid to speak her mind. She showed great affection and generosity towards those she cared about and has supported and encouraged young people in numerous ways, most importantly by introducing them to those who would be able to inspire and mentor them. Making connections between people with varying interests and from different generations and disciplines, sometimes thinking of common areas of possible collaboration one would never have imagined, was something that came naturally to her.

During the past weeks I have been receiving messages from our friends from the global philanthropic sector, particularly those from the Foundations for Peace network who remember her love of life and indomitable spirit and strength. We remember and miss the courage and passion that fuelled her unstinting support and commitment to supporting social justice initiatives.

Ambika Satkunanathan, is chairperson of the Neelan Tiruchelvam Trust.