2022 UKCF Conference: To get to the future, we must get through now

The 2022 UK Community Foundations conference focused on the future. But, taking place in Manchester, it was very much set against the crises of right now.

What will the future look like for our communities into the 2030s and beyond: that was the vision UKCF CEO Rosemary Macdonald put to the several hundred gathered at the Kimpton Clocktower Hotel in Manchester last week. Delegates at this year’s UKCF comprised representatives from community foundations across the country – but also included a sizeable international contingent, thanks to scholarships from IIEE and ECFI with support from the Mott Foundation enabling participants to travel from Africa, Latin America, Australia, and Eastern Europe.

Manchester Mayor Andy Burnham opened the first day of the conference, highlighting the unique power of local and community-based organisations.

‘Change will be built from the bottom up,’ Burnham said, sharing an example of how Manchester local government worked with organisations to reduce rough sleeping in the city. As a result of their project, life expectancy went up faster in Manchester than anywhere else in the UK.

He called on the community foundations to give core and creative funding – as well as to look beyond one-year projects.

‘If we’re going to get through the cost-of-living crisis,’ he said, ‘we need everyday community funding.’

Climate crisis is a symptom of the bigger failure

In the breakout sessions, a talk given by Dark Matter Labs co-Founder Indy Johar pushed participants to reckon with the scale of the global crisis in front of them.

‘We are living in the greatest extinction event ever,’ Johar said.

For community foundations, the question is about how to support the transition with the resources and connections they have. Communities will need to reckon with, and be at the forefront of, figuring out how to go from a competitive system to one where neighbourhood, communities, and nations are collaborating.

‘We all exist as a multitude,’ Johar said, who stressed the importance of language in his talk. ‘The language of local versus global is problematic. It has created a dichotomy. We are all linked to the planet.’

‘It’s important that civil society is involved with the transition ahead,’ Johar said to the participants. 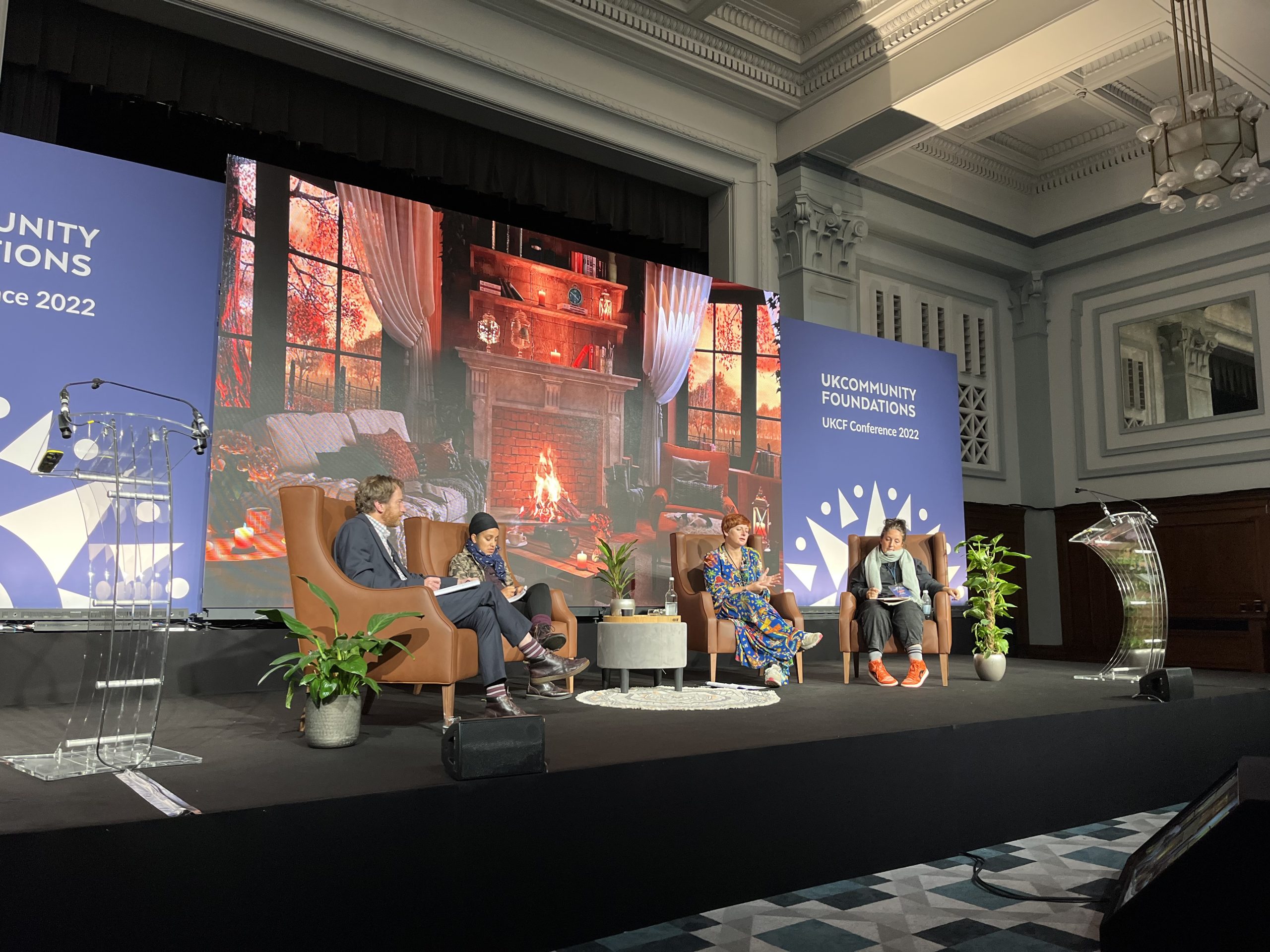 The big question the panel sought to answer was: Are we acting in ways that are commensurate with the challenges we’re facing?

The panellists pushed attendees to think much more radically about what action was possible for their organisation.

‘There’s a difference between funding for palliative care and funding for transformation,’ Kaur said, noting that palliative care for a community was still important, but it needed to be clearly understood for what it was. Funding for transformation could involve helping neighbourhood reimagine the land contract, think about how to grow their own food, rethink what the working week looks like.

‘Work that does amazing transformational change does many things at once, only one of which might be represented in the label,’ Coldicutt said, pushing the audience to think about what was truly possible for their organisations. 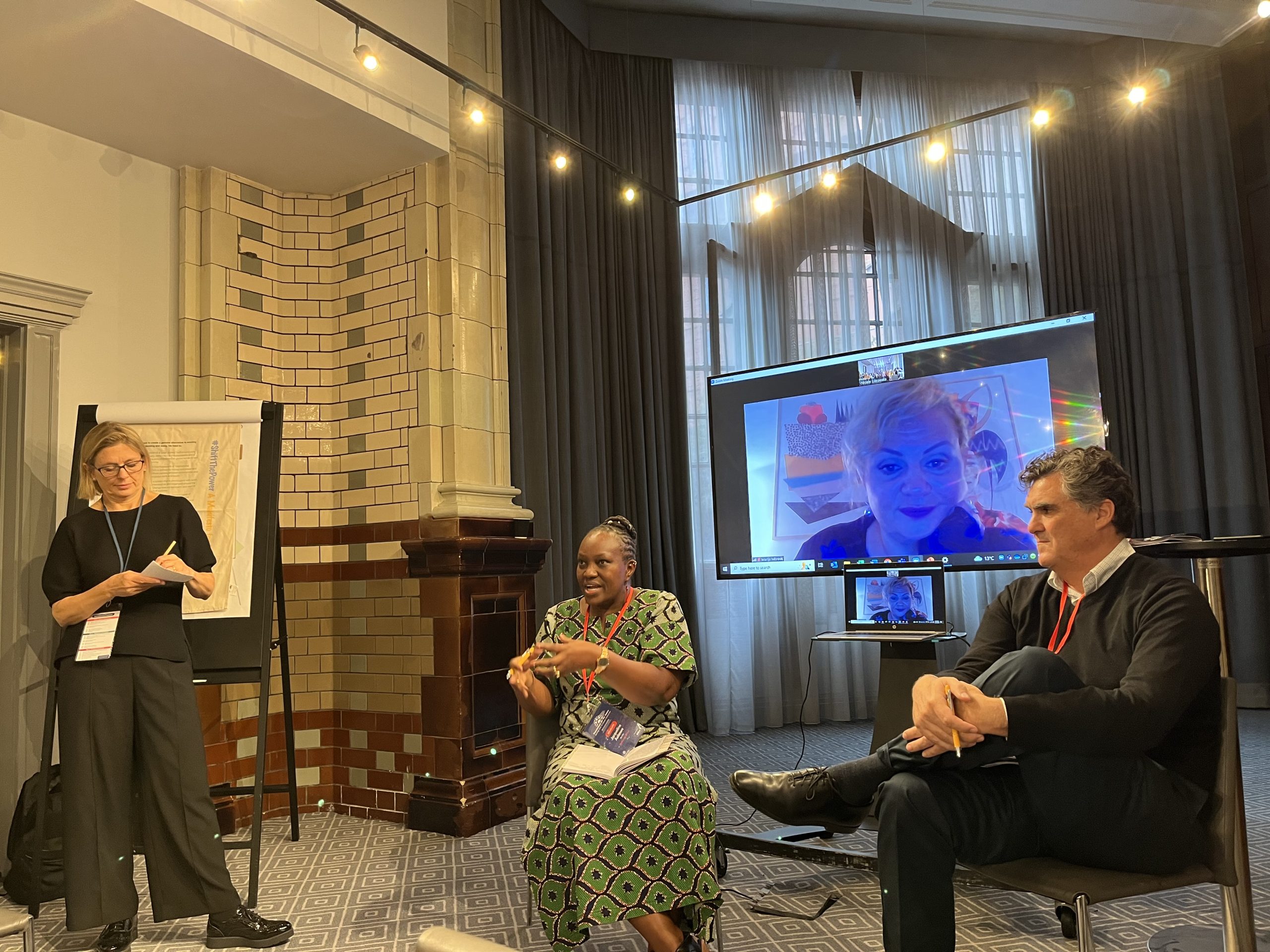 Left to right: Jenny Hodgson, Jacqueline Asiimwe, Marija Mitrovic (on screen), and Agustin Landa speak on a panel about community philanthropy around the world.

A session moderated by Global Fund for Community Foundation’s Jenny Hodgson convened three international panellists to discuss community philanthropy around the world. CivSource Africa’s Jacqueline Asiimwe from Uganda and LANZA’s Agustin Landa from Mexico were joined by Trag Foundation’s Marija Mitrovic who called into the panel from Serbia.

‘Communities have always been the ones to respond when things have gone wrong,’ Hodgson said.

Asiimwe and Landa spoke about channelling a long-standing culture of reciprocity and giving into the organisations that Western philanthropy recognises as community foundations.

‘We’ve always given, but it’s been relegated in the past,’ Asiimwe said.

In Africa during Covid, expats left, and INGO project funding was frozen, according to Hodgson. ‘So communities stepped up,’ she said.

Landa, who also worked with Alliance as Regional Representative for Latin America, highlighted the importance of communities taking ownership over their own resources and response.

‘We are social investors. Everyone can be a donor,’ he said. ‘We citizens decide what we want to do with our community.’

The right leaders are key

‘One leader is not going to get us out of the many crises we face,’ Ahmad said.

Editor’s note 21 October 2022: The second paragraph was updated to reflect that the financial support came through IIEE and ECFI with Mott Foundation support.