Covid-19 and the unfinished funding agenda in Southeast Asia

Since the beginning of the pandemic, philanthropists and private foundations have invested their resources to control the Covid-19 epidemic and ameliorate its impacts. The reactions have varied from admiration for the ‘generosity’ and social commitment of the planet’s richest to criticisms of their being part and parcel of the same economic system that is creating unprecedented inequities (as highlighted by this very pandemic). Not to mention the many conspiracy theories blaming the same global elite to exploit Covid-19 to fill their wallets and impose their malevolent agenda. 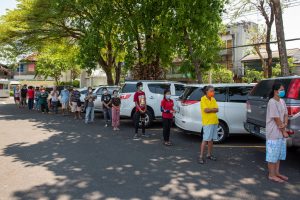 Bill Gates, in particular, has become the main target of suspicion for having stated in 2015 that an ‘highly infectious virus’ would do more damage to humanity than war – his supposedly prescient knowledge being taken by some as the ‘proof’ that he had manufactured Covid-19. Such fake news may be believed only by ignoring – as many unfortunately do – the substantial body of knowledge and philanthropic practice on the severity of future pandemics accumulated over time. In fact, foundations have long played a role in the prevention and control of emerging diseases. Some of those working in East and Southeast Asia – worth stressing the Bill and Melinda Gates Foundation not included – have identified the risks associated with zoonotic infections, including from the same coronavirus family, early on. As we think about strategic funding responses beyond the immediate crisis, we may want to look back to these seemingly forgotten initiatives.

In 1999, two decades ago, the Rockefeller Foundation began funding surveillance of emerging infectious diseases with pandemic potential in Southeast Asia and China (and later in Eastern and Southern Africa). At the time, global alarm was focused either on HIV/AIDS or on the localised diffusion of more familiar infectious diseases, such as tuberculosis, malaria and dengue. Yet, practitioners on the ground had become concerned about the likelihood of this part of Asia becoming a hotspot of new zoonotic outbreaks with significant transnational impacts. The rapid market integration, the encroachment of humans on natural ecosystems, the wild animal trade and the commercialisation of livestock were all important factors. Responding to these concerns, the newly established Asia office of the Rockefeller Foundation in Bangkok launched the Cross-Border Health (CBH) component of its ‘Learning Across Boundaries’ programme, integrating pre-existing surveillance work with grant-making on regional socio-economic dynamics.

CBH granted an average of USD $2 million annually to partners in China and surrounding Southeast Asian countries to build contextual knowledge and intervention capacity to identify and stem transnational flows of infectious diseases. It also funded advocacy for public health policies considering gender and other societal structures and addressing the disproportionate impacts on the most vulnerable, particularly migrants and ethnic minorities. Learning from the HIV epidemic, civil society groups were considered key stakeholders in building community-based surveillance and reduce societal stigma as crucial to control transmission.

CBH’s centrepiece was the establishment of an inter-governmental disease-control mechanism named Mekong Basin Disease Surveillance Consortium (MBDS). It played an important trust building role in the control of the successive outbreaks of genetically related, but diverse, SARS corona virus in 2002 and of avian influenza (H5N1) in 2003 that started in China and spread to Southeast Asia. Eventually, also the Nuclear Threat Initiative (NTI) (with support from the Google Foundation), and later, the Skoll Foundation joined forces in supporting MBDS and related endeavours. Over time, these and other grant-making institutions consistently supported transdisciplinary collaborations to rapidly detect, identify and respond to infectious diseases in the region, including the first-ever simulation exercise to test responses to a pandemic influenza emergency.

Attention was also given to the broader root causes of infectious diseases and the formulation of pro-poor risk reduction and coping strategies. In 2006, the Canadian IDRC funded the Asian Partnership on Emerging Infectious Diseases Research (APEIR), involving government, universities and NGOs in Southeast Asia and China to undertake policy research with a so-called ‘EcoHealth’ perspective linking economics, health and the environment. As an example, it examined the multiple functions of wildlife regionally, including as a source of protein for the poor, and recommended regulatory measures rather than abstract bans – a finding that counters the current frantic calls for the abolishment of wet markets, even those with no wild game. Given the broader relevance of this work, the same group of donors and their allies eventually facilitated the forming of intraregional networks, foremost CORDS (Connecting Organisations for Regional Disease Surveillance), linking MBDS and APEIR with networks in other regions and to WHO, FAO and other UN bodies.

Covid-19 arrives in the midst of an unfinished agenda and makes the promising investments of the early 2000s look like a missed opportunity, [and] the emergence of a new strain of coronavirus linked to wild game in China is no surprise. For international philanthropy and aid, it may be worth reflecting on why we made ourselves unprepared and draw lessons to address today’s pandemic (and the future ones).

More generally, the SARS and H5N1 epidemics triggered a flurry of bilateral and multilateral donor-supported initiatives in the region. The Asian Development Bank allocated a sizeable amount of resources in grant and loan funds to the governments of Cambodia, Laos, Myanmar and Vietnam to enhance health system responses to major public health threats. Significant resources, were also invested by bilateral donors – such as the AusAID (now defunct) and USAid agencies – to strengthen animal health surveillance and routine detection in people, as well as tackling the socio-economic drivers of zoonotic diseases. Globally and in the region, UN agencies advocated for One Health, implying transdisciplinary collaboration between professionals in promoting human, animal and environmental health.

A decade after SARS, this concentration of resources and approaches was recognised as having contributed to better preparedness. The emergence of the concepts of EcoHealth and One Health was seen as significant progress towards a more comprehensive approach to zoonotic diseases. There was optimism that countries could work together to fill the missing gaps through closer cooperation.

Gradually, however, funding initiatives declined in value and intensity due to several factors. There was a general reduction in international aid and, above all, a retrenchment from the social sector in favour of economic, infrastructure and technological investments. The privatisation and marketisation of health care – pursued by governments and donors alike – weakened interest in public health provision. The possible exception is the funding of the Universal Health Care (UHC) program, which, however, often came at the cost of former programs to strengthen health services. Some data suggests that, aside from a spike in funding for Ebola responses, health aid remained largely flat between 2010 and 2016 and declined thereafter.

This decline was clearly felt in Southeast Asia, now regarded as ready to ‘graduate’ from aid – growing inequities and unresolved development challenges notwithstanding. Some donors decided, sometimes hastily, that the desired goals had been achieved. A number of foundations left the area and those who stayed embraced a more technocratic agenda less responsive to local contexts and organisations. IDRC’s AIPER was impacted by the closing of the regional office in Singapore and a leadership transition at the Rockefeller Foundation led to the premature ending of the renamed Disease Surveillance Networks (DSN) Initiative. Program interaction with China was also reduced, owing to polarised views, more restrictive rules for overseas foundations and awe for the growing number of Chinese foundations (irrespective of their different priorities).

Diminished spending in health acquired a novel emphasis on non-communicable diseases due to their rising health burden, while funding of infectious diseases became narrowly targeted to specific diseases mainly malaria. While sanitary emergencies from H1N1 in the US to the Ebola outbreak in Africa caught global attention, interest in Asia lessened, and eventually disappeared, with the containment of SARS and H5N1. Experts warned that the generic capacity to predict and identify biological threats remained essential, even if the memory of past epidemics was fading. They were largely ignored.

Covid-19 arrives thus in the midst of an unfinished agenda and makes the promising investments of the early 2000s look like a missed opportunity. Despite the popularity of conspiracy theories, the emergence of a new strain of coronavirus linked to wild game in China is no surprise. For international philanthropy and aid (as for governments and other stakeholders), it may be worth reflecting on why we made ourselves unprepared and draw lessons to address today’s pandemic (and the future ones).

It is imperative that health and public health care return to greater relevance in international funding (and government’s agenda). While aid is a small part of global spending on health, it remains an important supplement to local resources in low and lower-middle income countries such as the majority of those in Southeast Asia. Fund allocation should give more direct support to home-grown initiatives and organisations, acknowledging that health is intrinsically related to socio-cultural and political processes, shaped by specific contexts. Rather than opting for vertical programs, foundations should reconsider their early vision of building systematic transnational and transdisciplinary capacity to deal comprehensively with zoonotic diseases and to coordinate in containment strategies and sharing of expertise and resources. Likewise, their insights that medical interventions cannot be disjointed from social justice and quality of governance is still extremely relevant today, as Covid-19 highlights, and requires a U-turn in donor practices to stop the ongoing financial undermining of civil society.

As governments and donors race to find better treatment, a vaccine and technological data-science tools, past experiences remind us that the control of present and future epidemics requires also integrated and transformative funding approaches. Doing so, philanthropy can seize the opportunity not only to overcome the Covid-19 crisis, but also to contribute to a more safe, sustainable and just future.

A longer version of this article was originally published in New Mandala.

Dr Rosalia Sciortino is emeritus regional director for the International Development Research Centre (IDRC) in Singapore and for the Rockefeller Foundation in Bangkok, Senior Adviser for AusAID (now DFAT), and programme officer in the Ford Foundation’s offices for Indonesia and the Philippines. 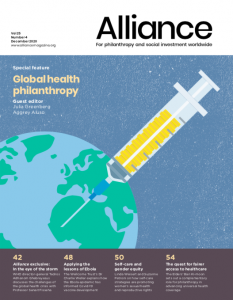 At £46 billion each year – almost a quarter of all grantmaking – philanthropy spends more on health-related causes than anything else. As the Covid-19 pandemic intensified, philanthropy provided critical funding for vaccine development, medical equipment, mutual aid, social welfare, and global health infrastructure. But there is intense debate about how the largest foundations interact with governments, international bodies and pharmaceutical companies and how they should be held accountable to citizens. This issue of Alliance considers new directions for global health philanthropy and explores whether health funding is going where its most needed. It is guest edited by Julia Greenberg, Director, Governance and Financing, Public Health program, Open Society Foundations and Aggrey Aluso, Manager of Health and Rights Program, Open Society Initiative for Eastern Africa.

No matter if some one searches for his necessary thing, therefore he/she desires to be available that in detail, therefore that thing is maintained over here.|