Our voices are strong: why self-led activism works

Every voice matters. But impoverishment, injustice and violence in communities around the world routinely serve to silence women, girls and trans people. This leaves them little choice but to fight to be heard and to have a say in the decisions that affect their lives.

And they are doing just that. In villages, towns and city squares, in schools, health centres and courtrooms, through print, electronic and online media, feminist activists are raising their voices to claim their rights. They are speaking out and organising to make change in their communities.

Why is self-led activism so powerful? In self-led groups, people who have long been ignored or silenced are speaking for themselves and demanding to be heard. Self-led groups are founded, led and staffed not by well-intentioned allies or outsiders, but by people whose activism is rooted in personal experiences of stigma, violence and exclusion.

Mama Cash believes that social change resulting from self-led activism is more authentic and responsive to deep social injustices because it is organised by people who know what needs to change and have a real stake in securing social transformation. And because the change they advocate is structural, not cosmetic, it is more likely to last. The philanthropic sector has a crucial role to play in resourcing their groundbreaking activism. 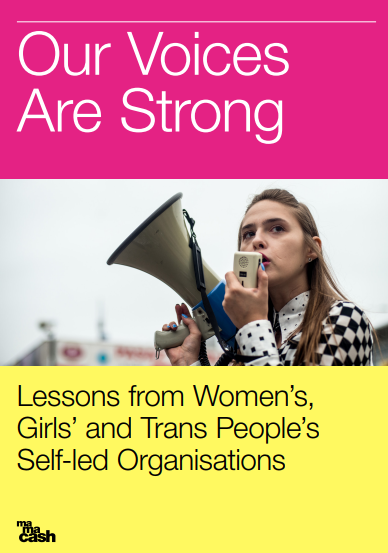 Our Voices Are Strong is a new report based on interviews with fifteen of Mama Cash’s grantee-partners.

The research shows that the power of women, girls and trans people at the helm of self-led organisations lies in their use of direct, personal experience to push for greater inclusion and justice in their communities.

Whether they are girl domestic workers in Tanzania, sex workers in Thailand, or lesbian, bisexual and trans people in Ukraine, their strategies for change are rooted in lived experience.

Coming from the communities they are trying to change gives these activists a keen understanding of the issues.

Aware Girls in Pakistan, for example, supports girls and young women to hone and practice political participation skills and then organises ‘citizen committees’ to facilitiate girls’ participation and  foster dialogue between girls and policy makers. ‘Because our work is about changing the attitudes of the community […], it is very important for us to be seen as insiders’, reflects one of the group’s founders.

First, they nurture and strengthen their organisations, building their collective capacities to mobilise constituencies for effective advocacy.

Second, they use shared values and culturally-specific messages to address their communities. This dialogue with the local community is key to changing oppressive norms and behaviours.

Third, they target stakeholders, including policymakers and media, to shift and shape political agendas to take into account their visions and needs.

Finally, they collaborate by networking and creating alliances with other civil society actors to amplify the voices of self-led constituencies.

Our Voices Are Strong also makes recommendations to funders about how to support self-led activism. First and foremost, funders can provide the resources that self-led groups need most: flexible and longer-term funding.

Sustained, flexible resourcing allows groups to build their organisations and constituencies, engage with stakeholders and share their visions of success. Funders can also provide support that strengthens movements, not just individual organisations.

For instance, funders can support alliance building to amplify organisations’ reach and voice, and introduce grantee-partners to other groups and movements.

At Mama Cash, the victories and advances secured by self-led feminist grantee-partners are a constant inspiration. Every day, these activists creatively and courageously envision a more just world, putting themselves on the line and insisting that every voice matters.