We tried to see whether charities’ admin costs correlate to their effectiveness, and you won’t believe what happened next

It’s nonsense. As Michael Green, co-author of Philanthrocapitalism: How Giving Can Save The World says[1]: ‘A bad charity with low administration costs is still a bad charity’.

The merits and demerits of assessing charities on their admin costs have been debated for years. Then, in 2013, Giving Evidence ran and published some *data* (rather than just opinion). It was, to our knowledge, the first ever empirical data to be published about the relationship between administration costs and charities’ performance.

It indicated that high-performing charities spend more on administration costs than weaker ones do. In other words, the correlation goes the other way around from the popular notion. (Warning: we could only get a small sample for our analysis).

That was six years ago, so we have tried to repeat and update our analysis. (We are scientists!)

We found that the method we had used last time virtually collapsed and that we can’t now say anything reliable using it :-(

Our method is outlined below.

This analysis requires getting: (i) some objective measure of how good a charity is, and (ii) the amount that it spends on administration. We then compare the two. The difficult part is the first. 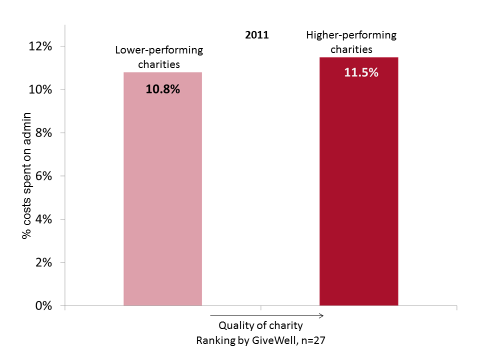 Last time, we used the ratings by GiveWell as our measure of charities’ effectiveness: GiveWell[2] is a US non-profit run by former New York hedge fund analysts, which produces and publishes independent analysis of charities (in particular sectors) and recommends to donors some of the charities it has analysed. Last time, we compared the average admin spend of charities recommended by GiveWell with that of charities that it had assessed but not recommended. The recommended ones spent on average 11.5 per cent of their costs on administration, whereas the charities which GiveWell reviewed and didn’t recommended spent only 10.8 per cent on average. We found the same patterns for its recommendations the previous year; and it was even more pronounced when we used the four levels of ranking that it had in 2009: the gold-rated charities spent more on average on admin than did the silver-rated ones, and they more than the bronze-rated ones, and they more than the non-recommended ones.

GiveWell has since changed its method. Some of its recommendations are only part of an organization, e.g., a single programme run by a particular charity. Clearly admin cost data are reported for whole organisations. So we are only interested in instances where GiveWell recommends the whole organisation, and where we could get admin cost data for that organization. On that basis, we could get data for only six recommendations, and five comparator organisations which GiveWell had considered and analysed but not recommended.

Clearly that sample size is too small to be useful.

There may be other ways of getting quantitative, systematic data to shed light on the relationship between admin costs and performance – but using GiveWell’s recommendations is, at least for now, not one of them.

Nonetheless, there are masses of arguments and examples that show / suggest that money spent on ‘admin’ is not (always) wasted – the term ‘false economy’ comes to mind. Giving Evidence has rehearsed many before, and will continue to do so. Some are in Caroline Fiennes’ book, and others in the paper we published on admin costs in 2013.

Shruti Patel volunteered with Giving Evidence on this research.