We are at a pivotal moment in the history of the relationship between philanthropy and official development assistance. The key question is: will foundations take part in the Sustainable Development Goals (SDGs)? To find out, Alliance and Centris collaborated on a survey.

Based on past history, expectations should be low. Rarely has there been a meeting of minds between foundations and development agencies. The history has been chequered, with Barry Gaberman, former senior vice president of the Ford Foundation, once describing the two sectors as ‘ships that pass in the night’. Given the replacement of the Millennium Development Goals (MDGs) by the Sustainable Development Goals (SDGs), will it be different this time?

There are positive signs. The development of the SDG Philanthropy Platform means that foundations are more organized than in the past. SDGfunders.org has been set up to enable funders to engage in the global development process. The result is that there is more of a ‘buzz’ about the SDGs than ever there was about the MDGs.

Yet there is scepticism in some circles. According to CIVICUS, some of its members say the acronym ‘SDGs’ stands for ‘Seriously Distracting Gimmicks’. In the March 2015 issue of Alliance, Kevin Watkins suggested that the philanthropic community had been ‘conspicuously absent’ from the debate about SDGs because the process was ‘boring’ and the ‘shopping list’ of 17 goals and 169 targets signified absence of an underlying strategy[1].

The survey
The survey investigated whether foundations intended to take part in the SDGS and at what level. It asked what discussions they had held, whether they were in negotiations with governments, and whether there was good fit between the SDGs and their work.

The survey was sent out to Alliance readers and posted on relevant websites. There were 83 responses from 24 different countries. This is not a huge response and we cannot claim representativeness, though numbers are sufficient to do some basic statistical analysis. While not meeting the rigour of surveys that measure voting intentions, much can be learned from the results, not least because there is an impressive consistency running through the data, and this increases our confidence in the results. It is nevertheless better to think about the results as illustrative of attitudes towards the SDGS rather than a definitive account. 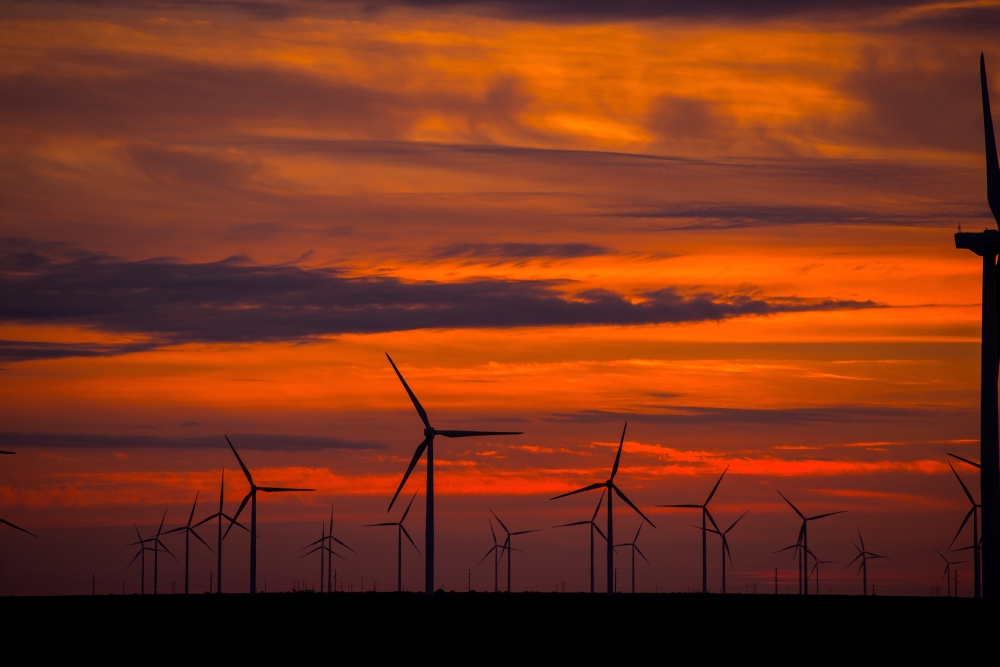 The results
The survey suggests that the foundation sector is poised to make a major contribution to the SDGs.

As might be expected from a community that is independent minded with its own source of funds, there was some variation in the responses. Overall, however, the results are overwhelmingly positive in support for the SDGs. Most respondents see the SDGs as a valuable strategy to make progress on some of the most difficult problems facing the world. 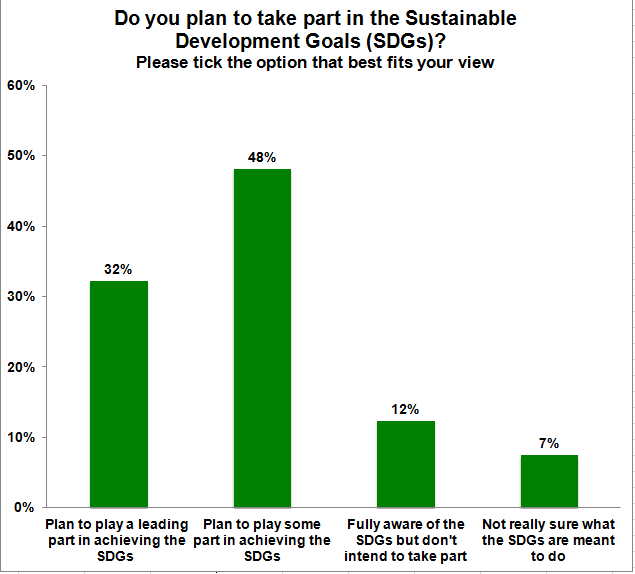 To probe attitudes to the SDGs more deeply, we asked people to say whether they ‘strongly agreed’, ‘slightly agreed’, ‘slightly disagreed’ or ‘strongly disagreed’ with eight statements about such items as goodness of fit between foundation goals and SDGs, relationships with government, relations with civil society, role of data and other topics. Full results are given in Chart 2. 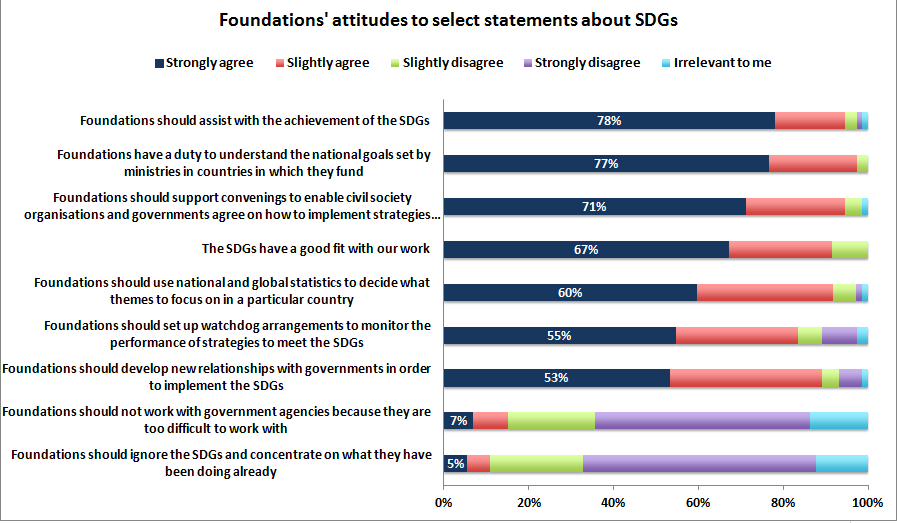 There was also strong support for the idea of civil society engagement in the process. More than two-thirds ‘strongly agreed’ that ‘foundations should support convenings to enable civil society organizations and governments to agree on how to implement strategies to achieve national goals’. More than half – 55 per cent – ‘strongly agreed’ that ‘foundations should set up watchdog arrangements to monitor the performance of strategies to meet the SDGs’.

Some of the most striking results were about foundations assuming public responsibility. More than three-quarters of respondents (77 per cent) ‘strongly agreed’ that ‘foundations have a duty to understand the national goals set by ministries in countries in which they fund’. Somewhat surprisingly in view of past evidence, 60 per cent ‘strongly agreed’ that ‘foundations should use national and global statistics to decide what themes to focus on in a particular country’.

Chart 3 shows that ‘End poverty in all its forms everywhere’ is the goal where there is the best fit (75 per cent) between what foundations do and the SDGs, while ‘Conserve and sustainably use the oceans, seas and marine resources for sustainable development’ has the least fit (25 per cent). Looking at the list, it may be that more general goals get most support, while the more specific a goal is, the less likely it is to be popular.

Overall this suggests that there is highly fertile ground for collaboration with foundations and all of the SDGs. As one foundation put it: ‘SDGs is the way to go and we all must work to make it happen.’ Another suggested: ‘Foundations have a major role in convening discussion on links between the SDGs and strategies of inclusive and sustainable development – and promoting awareness of these links.’

Qualitative comments
The final question we asked was: ‘Do you have other thoughts about the SDGs going forward?’ Classifying the answers to this question reveals three important areas in the relationship between foundations and the SDGs that require thinking about.

The first is the mechanism for implementation. Several respondents were concerned about how the arrangements would work. Essentially, the question is how to move from an abstract framework to practical reality. One said: ‘I think we should now move from what is on paper and become much more pragmatic in realizing the SDGs.’ Another asked: ‘How are we going to implement the SDGs in our countries?’ A third said: ‘How do we turn the framework into measurable outcomes?’

A second group of comments was about how relationships between agencies would work. One said that arrangements ‘. . . need to be nuanced in such a way that foundations in different contexts and of different sizes can see a role for themselves’. In a similar vein, another said: ‘I am not sure that governments will give the space for foundations and civil society to play an equal partner role in all of this and actually they might be simply after their money.’ Others were concerned about the bureaucracy and the measurement: ‘I fear we will spend too much on measurement and achieve too little.’

The third group of comments was about the inherent weakness of top-down intervention. As one put it: ‘Unless there is more understanding of local circumstances there will be no meaningful sustainable development, and funders risk prescribing the wrong medicine and doing more harm than good.’ Another pointed to the dangers of elitism. ‘This should not just be a webpage and an elite group that one has to be invited into, but open to a wide range of civil society actors.’ Also, it was thought prudent to ensure that there is not a single magic bullet solution. As one respondent put it: ‘It is important to understand the peculiarities of some regions in the world, where its characteristics and ancestral practices mean that some things will not work.’ And another: ‘It is not just a question of a need for stronger partnerships between development actors and the governments, it is equally important that citizen participation in development should be enhanced.’

Conclusion
The results of this survey are unequivocal in suggesting that foundations are keen to collaborate on the SDGs. This is a major breakthrough in the relationship between philanthropy and official development assistance.

At the same time, there is a need for caution. While foundations are well disposed towards the SDGs, there is concern about how arrangements will work in practice.

There have been many fads and fashions in philanthropy over the years. The key question is how to make the SDGs stick before the next new thing rolls in and takes over. History has provided many examples of well meaning systematic top-down efforts to end poverty and its associated ills that have not lived up to their potential. The question I posed in this article was ‘Will it be different this time?’ The next question is ‘How will it be different?’

Barry Knight is director of the Webb Memorial Trust and CENTRIS, and adviser to the Global Fund for Community Foundations. Email barryknight@cranehouse.eu