( Session : the art of philanthropy: new paradigms for social change)

Too often it seems that discussions about art funding begin from a somewhat flawed premise; namely that there is a fundamental opposition between ‘art for art’s sake’ and ‘art for social change’. 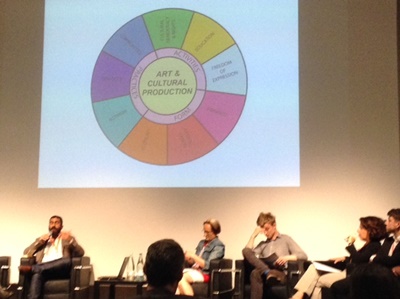 It would be useful to declare a moratorium on people proceeding in debate as if these two concepts were antithetical.

The phrase ‘art for art’s sake’ was coined very deliberately to denote cultural endeavour that did not exist to propagate the moral or political orthodoxy of the day. It is a term loaded with revolutionary intent.

It is synonymous with the desire for social change, not opposed to it.

I mention this having just left a session at the EFC conference enthused by the depth, subtlety and strength of the claims made for art; both as a transformative instrument of the self and as a lever of economic and cultural empowerment.

The autotelic vs pragmatic premise was dealt with swiftly, and the discussion that followed was all the better for it. It seems that once this false dichotomy is dispensed with, there is an important and wide-ranging debate to be had.

Amongst the many provocations offered by the panel, here are a few that I found particularly powerful: