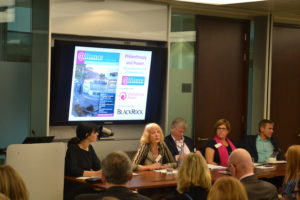 Have foundations got too much power? Stephen Pittam, Sophie Pritchard, Sue Daniels and Andrew Barnett discussed questions arising from Alliance magazine’s September 2013 special feature on Philanthropy and Power at the September 2013 Alliance Breakfast Club held in association with Philanthropy Impact.

Watch the panel’s opening speeches on our youtube channel…

Opening the morning’s discussion Stephen Pittam, former Secretary of the Joseph Rowntree Charitable Trust and guest editor of the September 2013 issue of Alliance, began by raising a number of concerns he has about the power wielded by foundations in relation to grantees and to society at large.

A key concern for Pittam is the power foundations have to determine where to put their resources. In many cases they have a worryingly small number of board members (the Gates Foundation has just three). While governments can in theory claim legitimacy from popular support where does the legitimacy of foundations lie and who is there to hold them to account?

For Pittam this raises important questions both about what is being funded and about what isn’t, as well general issues regarding the lack of democracy at the heart of grantmaking organizations .’My fear’ he said, ‘is that in this monetized society those with money can determine the agenda.’

From the audience Louise Mousseau from UnLtd added that there is a class issue in funding, with foundation boardrooms being dominated by white middle class people potentially giving rise to a highly skewed agenda.

On the panel, Sophie Pritchard of Edge Fund agreed that funding organizations tend to be run by people from very privileged backgrounds and that part of the challenge for Edge Fund is trying to give a voice to other areas of society.

In response, Andrew Barnett, Director of the UK branch of the Gulbenkian Foundation, disagreed that power is a big issue for foundations. The reality is that people have made money. In setting up an organization for the betterment of mankind, he argued, founder Calouste Gulbenkian would have wanted his foundation to exercise the power it has to maximize its beneficial effect. For Barnett the focus should be less on power than on the performance and practice of foundations.

Philanthropy Impact’s Sue Daniels added that to some extent individual philanthropists have a right to set the agenda. ‘They have made the money, they have worked hard, they have provided jobs , paid their taxes.’ Rosalind Riley of the Brook Trust, an individual donor herself, agreed that for all intents and purposes people can do what they like with their money. If a government wishes to determine the agenda then it can do so through taxes. Outside of this it becomes an individual donor’s choice.

But for Pittam this is not the role philanthropy should be playing.  In his view 21st century philanthropy’s role lies in building an informed and active civil society to generate new ideas, to challenge the status quo and to act as an ameliorating force to the other centres of power influencing society, one of which is increasingly the financial sector. It was civil society, he reminded us, that was at the forefront of the 20th century’s social movements and yet today 60 per cent of foundations do not accept grant applications from civil society.

However, UnLtd’s Mousseau asked if we were being entirely fair to foundations, pointing out that it’s much simpler to secure funding from foundations than, for example, the government.

Sue Daniels added that less than 50 per cent of wealthy people are donors and it is imperative to encourage more giving into civil society, while Neelam Makhijani from Resource Alliance asked how we could strengthen civil society when investors in organizations, particularly in those operating in the developing world, see them as contractors rather than as institutions in their own right.

Words of warning from Diana Leat, however, who pointed out that criticisms about lack of transparency or accountability could equally be levelled at civil society.
Accountability

David Wickert of Chapel and York made an impassioned plea for foundations and trusts to open themselves up to the sort of transparency and criticism we now expect from other areas including government and finance. This, he said, is the very thing foundations should be funding.

Barnett agreed with this and said he welcomes criticism. But he also maintained that although foundations can be ‘whimsical’, from his perspective they are open, a view which found some support from the audience. Carolyn Hayman from Peace Direct noted that two of her funders had sent round anonymous questionnaires to grantees providing a space for criticism, while Eve Dallas from the Paul Hamlyn Foundation noted that they have taken part in the Center for Effective Philanthropy’s Grantee Perception Survey. Laura Wigzell from Christian Aid said that they were aware of their power as a grantmaker but they go out of their way to moderate it, using an accountability partnership to make sure grantees are involved in project design and providing a framework for criticism.

Discussing her article on power sharing, Sophie Pritchard offered some more examples of how the influence of funders might be diluted. One example is the Red Umbrella Fund, a grantmaking organization focusing on sex workers whose decision-making panel is 80 per cent sex workers. Barbara Meyer handed over the Southern Partners Fund to the community it hopes to benefit. She also described how Northern Ireland Community Foundation have involved a whole community in setting the agenda and identifying where funds should go, while the Central American Women’s Fund and FRIDA Young Feminists Fund have brought applicants themselves into the process, allowing them to score and give feedback on other applicants.

A problem with perception

Whist disagreeing that grantmakers hold too much power, Barnett agreed that there is nonetheless a perception that they do which can affect the way in which they and grantees act. This perception also concerns Pittam, who noted that in editing the September 2013 issue of Alliance many contributors were reticent to openly voice their thoughts in case it damaged potential grants. Thus a level of transparency and honesty between funded and funder was being lost. Michael Linke of Ben’s Bikes agreed that he doesn’t tell donors the same things he tells his staff, adding that funders aren’t necessarily aware of the perception grantees have of them and how this affects their organizations. Another audience member referred to a report from Beth Breeze that media perception of foundations and wealthy philanthropists is overwhelmingly negative in comparison to that of charities.

As the talk approached its end Diana Leat requested a little perspective. The amount of money foundations have, she pointed out, is not only tiny compared to government, it is a small fraction of non-profit sector funding as a whole. Jon Cracknell of JMG Foundation produced actual figures produced by environmental grantmaking bear this out. But they also make clear that in certain areas foundation funding can account for a much larger proportion of all available funding.

To this point Barnett agreed. ‘It is not about whether we hold power,’ he said. ‘We are just deluding ourselves if we think this power is excessive.’ By way of example his own foundation based in Portugal has funds of €100 million each year, but this amount is many orders of magnitude smaller than government spending. While one can point to the power of organizations such as the Gates Foundation, Barnett argued that Gates is not typical of the general landscape.

With much of the discussion focusing on the negative implications of power, Sue Daniels also pointed out that power can also be something positive – the power of knowledge, the power to provide opportunity. Power can be both soft and hard. By itself money does not guarantee the power to influence events without the knowledge of how to do so effectively.

In some respects the power of organizations such as the Joseph Rowntree Charitable Trust comes from their many years of experience, and who could complain about that?

The Alliance Breakfast Clubs are free to attend. The next Breakfast Club will be held on Tuesday 3 December discussing ‘What will the next generation of philanthropists do?’. If you are interested in attending please email us at alliance@alliancemagazine.org