Funding for climate action still sits at less than two per cent of all philanthropic funding, ClimateWorks’ annual funding trends report has found. In 2020, ClimateWorks estimated that giving for climate change mitigation grew to $6-$10 billion globally – up from $5-9 billion in 2019 – however, as a proportion of total giving, the needle has not moved.

‘While we saw positive trends across climate change mitigation philanthropy in 2020, greater and more sustained levels of giving are needed to match the massive scale of the challenge. There is no shortage of climate solutions in which to invest, and the grantee field is better positioned than ever to help deploy resources toward climate action at the speed and scale that is needed to address the climate crisis.’

The climate emergency isn’t slowing down.

And within climate funding, the donations are unevenly distributed. Areas such as sustainable finance, food, agriculture, and clean electricity receive the most funding; while climate change solutions that integrate racial justice and equity receive less. And critical gaps in this unequal distribution have emerged – emissions in the transport sector have overtaken emissions in the power sector, yet data shows that funding for action on curbing transportation sector emissions sits at less than four per cent of all tracked foundation funding for climate change, a sum around $76 million in 2020. 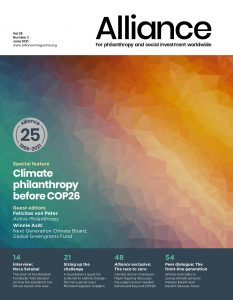 The report notes that philanthropies are on track to exceed an updated 2018 Global Climate Action Summit goal to commit at least $6 billion in major climate pledges by 2025. Funding from foundations amounted to roughly $1.9 billion in 2020, and total individual giving made up the other estimated $4-8 billion.

‘We are at a pivotal juncture in the battle to keep global warming below 1.5 degrees Celsius, making this a galvanizing moment for climate philanthropy. It’s encouraging to see funders close the gap needed to win on climate, and I’m excited to see so many stepping up to help solve the great challenge of our time,’ said Larry Kramer, president of the William and Flora Hewlett Foundation.

The report comes out just a month before the start of COP26 in Glasgow, where new commitments to climate funding are expected.