Famous American politician Tip O’Neil once said that ‘all politics is local’. These days, philanthropy is local as well. Of course, not all philanthropy has localised, but even prior to COVID-19, we saw trends toward decreasing foreign funding in Asia. 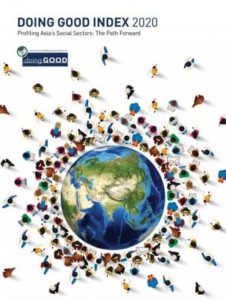 In fact, in our recently published Doing Good Index 2020, we note that while foreign funding still accounts for an important portion of budgets of social delivery organisations across Asia, it had been decreasing leading up to COVID-19. With the pandemic and the global dimensions of needs, philanthropic and corporate donations are needed closer to home. The decline of foreign funding presents a short-term challenge and a potential longer-term solution.

In our study in 18 Asian economies (16 countries plus Taiwan and Hong Kong), foreign funding accounts for 25 per cent of the budgets of the 2189 social delivery organisations that participated in our survey. Local corporate support on the other hand accounts for 15 per cent, and individual support is 20 per cent on average. Clearly, there is an opportunity for increased domestic financial support throughout the region.

In ten of the 18 economies in our study, survey respondents report funding going down. Foreign funding has been declining in Asia for several reasons. Most importantly, income levels of Asian countries have been going up. There is greater wealth in Asia than in any time in history. Aid agencies and foundations are choosing to fund projects and programmes in poorer countries. In six countries however, there are additional reasons. Governments in these countries are putting in place regulations such as the INGO law in China and the FCRA set of regulations in India, which make it more difficult for foreign capital to come in. They do so for a variety of reasons. Almost all governments pushing back on foreign funding cite money laundering, drug money, and terrorism as major reasons for the more stringent policies. There is also a concern voiced by some, undoubtedly felt by more, that foreign funding comes with political conditionalities which may not be aligned with their own government initiatives and plans.

Unfortunately, despite Asia holding a third of the world’s wealth, it is also home to two thirds of the world’s poor. While aid agencies and foundations may decide to fund countries with lower per capita GDP, there are still many unmet needs that warrant attention. Governments around Asia are putting in place policies which they hope will increase domestic private social investment. Four countries (China, Singapore, Korea, and Vietnam) have government sponsored giving days. In other countries, the private and social sectors are driving such initiatives such as Giving Tuesday in India and Tencent’s 99 Giving Day which generated an astounding ¥1.8 billion (USD 255 million) in one day! ESG requirements are now in place in eight of the 18 stock exchanges. And in the case of India, a national law which requires a two per cent before tax spend on CSR activities for the top 18,000 or so companies. Many governments also realise that the systematic lack of transparency fuels a debilitating trust deficit for the social sector which must be mitigated to allow more funds to flow. New reporting and governance regulations are being put in place across Asia.

We don’t know what our post-Covid world will look like. We do know that we are not going back to business as usual. Philanthropists and companies have been stepping up and will continue to do so. In Asia, the private sector, individuals, and companies tend to engage in alliance with government prerogatives. The right policies coupled with private and social sector initiatives can leverage our new normal to bring about the maximum good for our communities.

Ruth A. Shapiro is the Co-Founder and CEO of the Centre for Asian Philanthropy and Society (CAPS) in Hong Kong.

Tagged in: Covid-19 Next Philanthropy