Moving to a sustainable and fair food system is a giant challenge, and the organisations driving it are small compared to the problems. So it is crucial that they are as effective as possible. That requires basing their work on sound evidence: about precisely where each problem is, why it arises, the relative sizes of the various problems, and what approaches work to address them.

Giving Evidence has been working on this for some years, with a US-based foundation, Tiny Beam Fund. Strikingly, its settlor, Dr Carmen Lee, is an academic librarian so knows about making information findable! Much of the work that we have done together seems to be ground-breaking but could usefully be replicated in almost any sector. I’ll here explain our various endeavours. 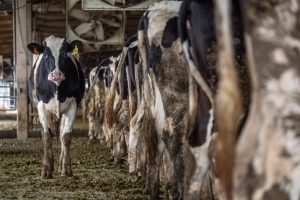 The impacts of industrial farm animal production, where animals spend their entire lives in pens too small to even turn around, could lead to the next global pandemic.

Carmen’s focus is tackling negative effects (especially in low-income countries) of industrial farm animal production (IFAP) – battery hens, pigs, cattle etc., Many of them spend their entire lives in pens too small to even turn around, stuffed with antibiotics which get into the water system, are thus consumed by all of us, which raises antibiotic resistance, ‘widely considered to be the next global pandemic‘.

Carmen says: ‘Tackling IFAP is poorly understood. It is not an established field with well-travelled paths. It is more like a mediaeval map with lots of space marked ‘here be dragons’. We don’t want to fund daredevils who just jump in to grapple with the monsters. Instead, it is hugely important for everyone to gain a deep, nuanced understanding of the complex contexts and problems. So we decided to fund the systematic acquisition of this understanding.

‘How to acquire this knowledge? Here’s where academic researchers enter the scene. Their training and skill set is well-suited to this task. Academics are also increasingly interested in studying industrial animal agriculture’s impacts in low-income countries for their own scholarly purposes.’

The unanswered questions are numerous, dwarfing the available research capacity to answer them. So it is essential to focus on the most important questions.

To do this, we borrowed and adapted a process developed in healthcare /medical research, by the James Lind Alliance. It elicits from patients, their carers and primary physicians (the intended beneficiaries of research) the questions that they most want researched, and has them collectively prioritise them. Obviously, we couldn’t ask the pigs, but we involved anti-IFAP campaigners, observers and researchers.

Tackling industrial farm animal production is poorly understood. It is not an established field with well-travelled paths. It is more like a mediaeval map with lots of space marked ‘here be dragons’.

We invited under-researched questions of many types: where the intensive animal farming is, how it has arisen, who is doing what about it where, what is effective in what circumstances, ‘basic research’ about animal preferences, how the funding flows, what laws are in place and how /whether/ where they are enforced, etc. That is, the research could be ‘just’ gathering data, and/or it could be evaluating potential fixes.

The resulting list of prioritised questions is published. The questions rated highest priority are about systems (e.g., policies of the World Bank, World Trade Organisation; and the effects of free-trade negotiations) and what works against various goals, e.g., changing consumer behaviour.

We call this The Burning Questions Initiative (BQI), and it repeats every two years. Tiny Beam Fund then offers fellowships and research planning grants for academic researchers to answer those ‘burning questions’.

We have talked with other funders to encourage them to also fund research into these priority questions.

As a librarian, Carmen suspected that research exists which practitioners could use more / better against IFAP. But it is not always easy for practitioners to find, interpret and apply academic research: it lives behind paywalls, is written in academic-speak, rarely includes enough about how to run the intervention, etc. And academics’ incentives are to publish and teach, not to engage deeply with practitioners.

We dreamt up a fund to help operational nonprofits to make better use of academic research and researchers. Funds might be used to hire an academic a day a week for six months to help find and interpret research relevant to strategic planning, or to run an academic advisory panel, or to buy access to academic journals. We ran a feasibility study – and about five minutes after reading our report, Tiny Beam launched such a fund. It is called the Fuelling Advocates Initiative (ie., fuelling them to be better by using research to improve effectiveness). TBF has made various grants in this programme: an example one allows an NGO which is setting up a regional office in Asia to use academic experts to help define its scope of work in Malaysia, Indonesia and Thailand.

There are structural impediments to collaborations between practitioners and researchers. Carmen reports learning ‘that getting practitioners /advocacy NGOs and academic researchers to work together on factory farming issues is not simple, especially in LMICs. Researchers and scientists in these countries often shy from NGOs /practitioners involved with advocacy and activism. When NGOs ask researchers to help answer urgent questions, or when researchers hear that their research will support organisations concerned with factory farming, many of them say ‘no, sorry, I can’t help’ – even though the research would be purely scientific (e.g. collecting and analysing data about the use of antibiotics in livestock farms). One reason is that the researchers or their universities receive considerable funding from the animal agriculture industry. Other reasons include that academics find working with NGOs to be frustrating because NGOs don’t know how to communicate with academics (who operate in a different universe); and very different time-frames (for an academic, a year is not long, but NGOs think that’s ages). That said, some academics are willing to help, and some NGOs engage well with academics. One should be mindful of these issues, and should not be surprised to hit brick walls.’

As mentioned, almost any sector could use these methods to increase the quality and use of evidence, and thereby make practitioners more effective.

Caroline Fiennes is the Director of Giving Evidence and can be reached on Twitter at @carolinefiennes. 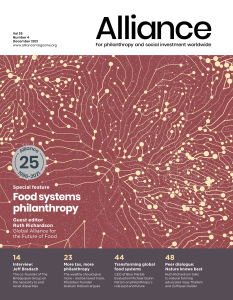