Let’s start with a plain statement: the systems, orthodoxies and assumptions of neoliberal capitalism have failed. Arguably, this has been clear for decades to those who cared enough to look. But at this point, even those still wedded to the empty promises of the ‘free’ market are finding it increasingly hard to avoid the inevitable conclusion. We have entered a period of violent collapse that is so clear, so devastating to the lives, hopes and dignity of so many, that it would require outright ideological zealotry to think that the solution was more of the same.

After all, the governing axioms of the last forty years have given us what, precisely?

Even a partial report card makes for grim reading: a precarious and atomised workforce, collapsed wages, chronic levels of personal debt, a health and social care system ravaged by austerity and private profiteering, a governing ideology that sees society as subservient to the economy and not vice versa, the ongoing gallop of financialization, an ecosystem teetering on the brink, deepening inequality, a mental health crisis of unprecedented scale, an utterly broken housing market, a discredited political class, an explosion in foodbanks, tens of millions unable to afford to heat their homes, supply chains collapsing, inflation spiralling by the hour… the list goes on and on.

Is it any surprise then, that in the face of all this, and with no meaningful or systemic solutions being offered via parliamentary politics, we are seeing trade union activity ramp up to levels unseen for some time?

The governing axioms of the last forty years have given us what, precisely?

Across the economy, and in the face of these intersecting secular crises, workers are striking and organising for a more just settlement, often following years or even decades of erosion in pay and conditions. Public support for such action is robust and growing, union membership is increasing month on month and formal activity is spreading to sectors and companies long thought to be resistant to union presence. All of that is helping to create a mass sentiment that increasingly feels like a consensus. Pleas for austerity, tightening belts, and the rhetoric of ‘all in it together’ are falling on deaf ears, and rightly so. Indeed, that type of language feels outright insulting at a time of record profits, dividend payments, share buy-backs and a billionaire class who have seen their personal wealth almost double in the last decade alone.

Labour unions can be a solution to overwhelming crises

The roots of this crisis of inequality are deep and complex, but when we are looking at how we might at least ameliorate some of its worst effects, a particular phenomenon is worth observing. The graph below shows how the settlement between workers and capital has altered since the mid 1970s. Prior to that time, as productivity rose, so did wages, almost on a one-to-one basis. But, crucially, since that period, practically all productivity gains have been hoovered up by capital, while workers, on the other hand, have seen remuneration barely budge in response. There are multiple reasons for this drastic shift within the economy, as well as the cultural and social fallout that followed in its wake. But one thing is for certain – the brutal dismantling of labour power during the 1970s and 1980s robbed people of their primary mechanism to resist it. Seen through that lens, it is clear why so few people now buy the divisive rhetoric of striking workers vs ‘ordinary workers’ that many in power are so keen to propagate. Instead, people are seeing the struggle for what it is; a battle by the overwhelming majority who have been locked out of the gains of the economy against the tiny minority who are willing to accumulate them for their own benefit, regardless of the vast humanitarian cost of doing so. 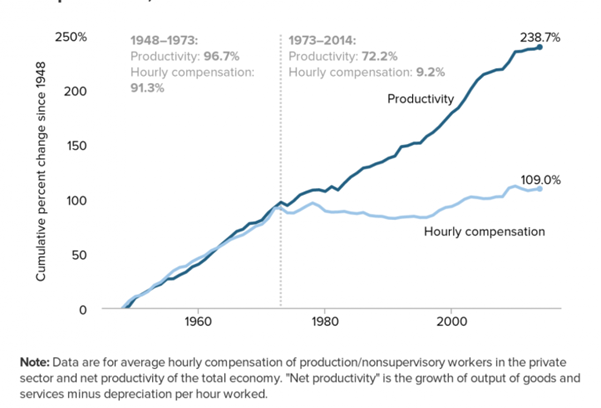 This state of affairs is pretty chronic, and it offers a stark challenge to foundations; what side of that struggle are we on and whose interests do we serve?

Because one thing we absolutely cannot do is wish the struggle away, or spend our time handwaving and extolling the virtues of incrementalism, politeness and playing nice, because look where that has gotten us. Even the arch capitalists in the sector, those who believe the ultra-wealthy somehow deserve what they have, those who see no issue with extreme inequality, surely even they can see a settlement where workers are forced to urinate in bottles while owners accumulate more wealth per minute than could be spent in a lifetime is unjustifiable? And if that is the case, which it surely is, then we have to ask how we alter it. Hoping capital decides to voluntarily reward labour is a busted flush, it hasn’t happened, and it won’t. And likewise, hoping the political class legislate in favour of labour and against the interest of capital is also a busted flush, it hasn’t happened, and it won’t. The only reliable way to shift that balance of power is via an organised, solidaristic working class advocating for their own interests at scale.

Foundations need to work with unions

That might be an uncomfortable thing for foundations to acknowledge, not least given our own conflicted and complex relationship to capital accumulation, but it doesn’t make it any less true. In the face of that, I’d argue strongly, and perhaps predictably, that where possible and legal, foundations should be looking to work with unions, to support their democratically mandated struggle and to fund and advocate around aligned issues wherever the chance to do so arises.

In doing so we have the chance, as a collective of progressive civic actors, to join a fight for an economic system that is geared toward human flourishing and not just the interests of asset holders and rentiers. A fight that could include shorter working hours, co-operative and collective ownership models, participatory budgeting, better health and safety, better childcare provision, universal basic income, universal basic services, to name just a few issues that foundations across the spectrum have expressed an interest in. Unions won’t deliver these things alone, but they can and should be allies for funders with aligned ambitions.

What side of that struggle are we on and whose interests do we serve?

Similarly, for those foundations with a vision for the state that has solidarity at its heart; for those that want to sound the final death knell for new public management, outsourcing, privatisation and profiteering, and instead reanimate the vital organising principles of collective risk, stewardship and multi-generational public assets; unions could and should be seen as allies.

The list of shared ambitions is vast. Those foundations that hope for a civil society that is deep, participative, pluralistic and that recognises its role in subordinating power to accountable and organised bases rooted in devolved voluntary association, let’s stand together with unions in that fight too. Those foundations that fund initiatives that work against a relationship to the natural world that is predicated on extraction and exploitation, we too have natural partners in the sections of the union movement that are laser-focused on a just and green transition.

Because our other choice is to watch from the sidelines while the struggle for a more liveable world takes place without us. And that struggle is one that needs desperately to be won, so we should surely play our role where we can. Unions will play a part and so will civil society more generally, but as funders, we should not shy away from seeing ourselves as antagonistic actors to a system that is reliably producing such widespread misery. Equivocation is itself a deeply political and ideological act, let us not forget.

And after all, what other course of action is left to us? If things continue as they are, we can have a pretty good guess as to how it will end up. We all get sadder, sicker and angrier. A zombie system lurches from catastrophe to catastrophe until there is nothing much left. Just abstract capital, existing somewhere, abstractly. Reproducing its vile logic on a dead and empty planet. And then there is us. Asking ourselves how we can be efficient grant-makers to the void.

I’m sort of joking, of course. But only sort of.