Foundations and labour: can the knot be unpicked?

A couple of times every year, the philanthropy sector in the U.K. has the same argument with itself. A comforting ritual of self-flagellation. And it goes something like this:

‘The existence of [insert political event/culture war confection/opinion poll/tabloid attack of your choosing] proves once and for all … that the sector is … [drumroll] … too left wing.’ 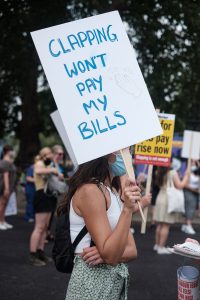 The logic then follows that in order to connect to the public mood, engage in effective governmental lobbying and not annoy a regulator increasingly hamstrung by ideological capture, the sector must change.

For a start, the claim totally erases the many hundreds of foundations in the U.K. that are overseen and governed by proud, unabashed conservatives. But more importantly, it also erases the fact that due to the paradoxes inherent in the philanthropic model, even progressive foundations are required to operate in ways that map far more easily onto the descriptor of liberalism than they do onto leftism.

This is most clearly seen in the arena of endowments. The U.K. foundation sector has about £70bn in assets, the vast majority of which is invested in the stock market. The implications of this are complex, knotty, and well-rehearsed, but they include a type of baked in support ( or at least acquiescence with) the principles of the free market, capitalist wage-relations, shareholder primacy, as well as a relationship to labour that is structurally extractive.

Read more: Foundations and trade unions: The time is right for greater collaboration

Squarely acknowledging this can help to clarify our role as pro-social actors. Philanthropy isn’t comprised of a band of system-smashing, class-conscious radicals who are out of step with the social and economic orthodoxies of the time. On the contrary, we are precisely emblematic of those orthodoxies, inextricably bound up with a set of systems that are fine tuned to funnel wealth, dignity and agency away from the majority and into the hands of an increasingly small number of asset holders.

If we can sit with this awkward truth, then we can begin to ask what room there might be to work within these constraints and contradictions in ways that might be genuinely antagonistic and generative. There are certainly examples of this mind-set visible in leading-edge grant-making practice, wherein some funders are supporting movement-based initiatives or organisations engaged in thinking through deeply transformative economic change at a systemic level. But what about our endowments? – is there any scope for action there? Or are our complicities simply too deep?

A new report, by the Alex Ferry Foundation and PIRC, Endowing Labour: Using foundations sector capital to improve the rights of labour, asks that question as it relates to an issue that cuts to the very heart of the contradictions discussed above, namely; worker’s rights.

The picture isn’t pretty. A vanishingly small per cent of foundations have a stated position on labour rights, standards or fundamental protections such as the right to unionise or to collectively bargain. And to make matters worse, many of the largest investment managers used by foundations are routinely voting down pro-worker resolutions such as representation on boards or the adoption of a living wage.

In some fundamental sense, this is not surprising. After all, asset managers exist to serve the interests of asset holders, not of workers, of capital, not of labour. That is the engine which drives the philanthropic model, which generates the returns that fund our grant-making. But if we look that fact straight in the eye, then perhaps we can begin to shift the conversation. If we can’t untangle ourselves from the market, can we nonetheless start to put pressure on managers to change their behaviour, to recalibrate their instincts toward more equitable settlements between labour and capital?

The model for this type of engaged-investor activism already exists, and there is instructive lessons to be taken from the successes of the climate movement in this area. Perhaps we can do something similar as it relates to labour? Make our investment policies robust and then be relentless in holding asset managers accountable?

Doing so won’t be easy or comfortable. It’s a messy conversation. We’re all in the mud on this issue. But if we face it head on, with no pretention regarding our own position, there are surely improvements that can be made.

At the Alex Ferry Foundation, a new organisation focused of work and workers, we are beginning to think through the practical implications of this and related questions, and would welcome contact from any similarly inclined actors in the sector.

Keiran Goddard is at the Alex Ferry Foundation, and the former Director of External Affairs at the Association of Charitable Foundations.