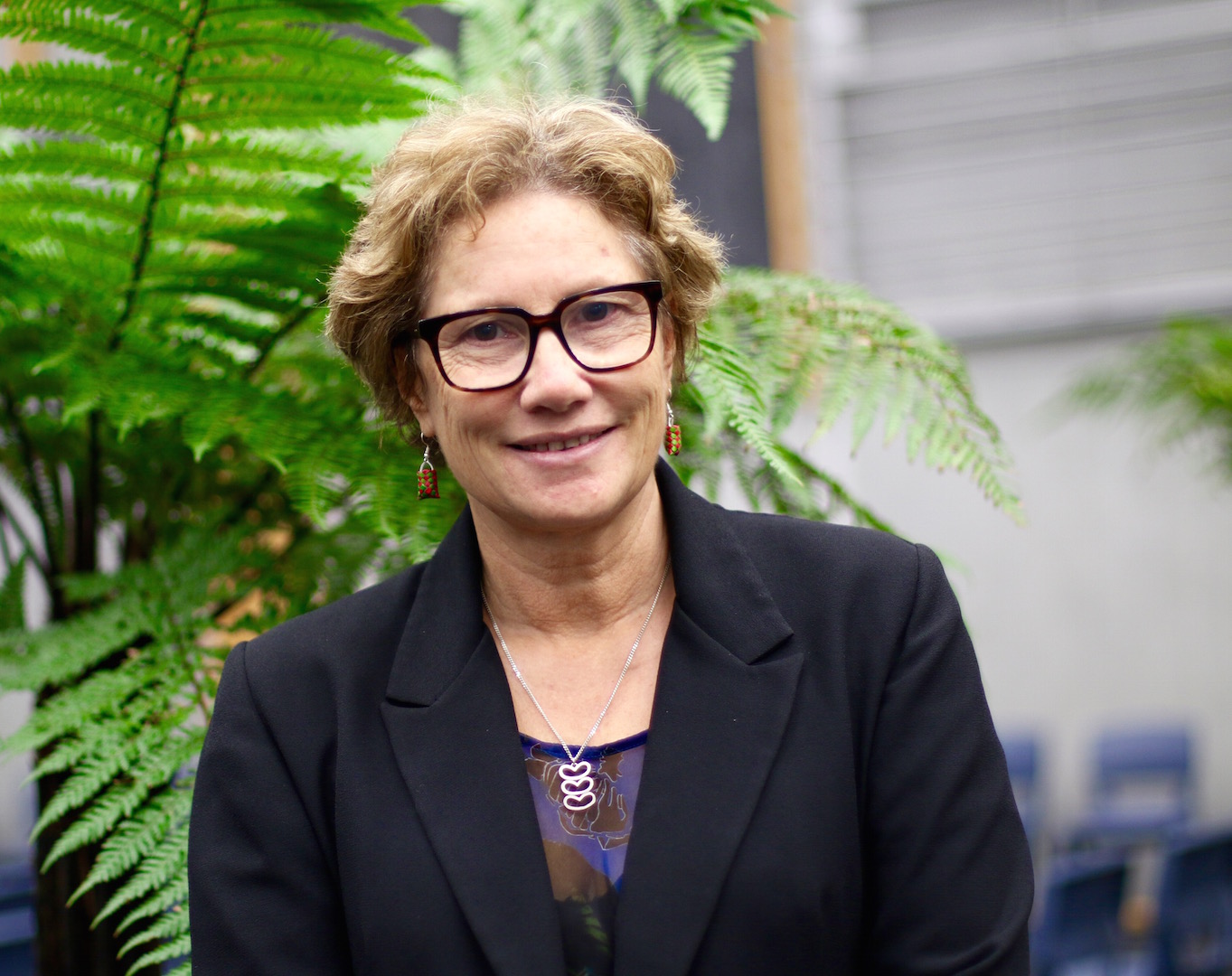 ‘The loss of our native language also led to the disappearance of the Māori mind,’ shared Selby, one of the hui participants.

Selby is the first female CEO of Te Wānanga o Raukawa, a pioneering Māori institute of higher learning in Otaki, which served as the venue of the convening.

Selby chronicled an astonishing timeline of the revival of Māori language: In 1915, all Māori in Otaki spoke their native language. By 1975, after settler colonialism had firmly penetrated its roots across New Zealand, no one under the age of 30 could speak Māori in Otaki.

That same year, three tribes set the impetus for language revitalization with Generation 2000, a 25-year experiment under the visionary leadership of Māori scholar Whatarangi Winiata. The experiment proved to be a success: A language that was lost for two generations is now spoken by half of the Māori population in Otaki.

To many of the indigenous participants at the hui, Otaki embodied a living model of what’s possible when local communities have ownership and control over development and cultural revitalization projects. Over the course of two days of the hui, indigenous scientists, doctors, scholars and activists shared with philanthropy groups their advocacy efforts on issues ranging from climate change to deep-sea mining.

‘Climate change is interlinked with colonialism. This is a moral crisis, whose impact is not felt equally. The confiscation of indigenous lands led to modern capitalism and industrialization,’ said Dr. Rhys Jones, a Māori physician and educator.

Dr. Jones emphasized that preserving indigenous knowledge and worldview was key for fighting climate change. ‘This battle won’t be won by governments. It will be won at the local level by stopping fossil fuel explorations, oil drilling and standing by the side of Indigenous Peoples’, he said. 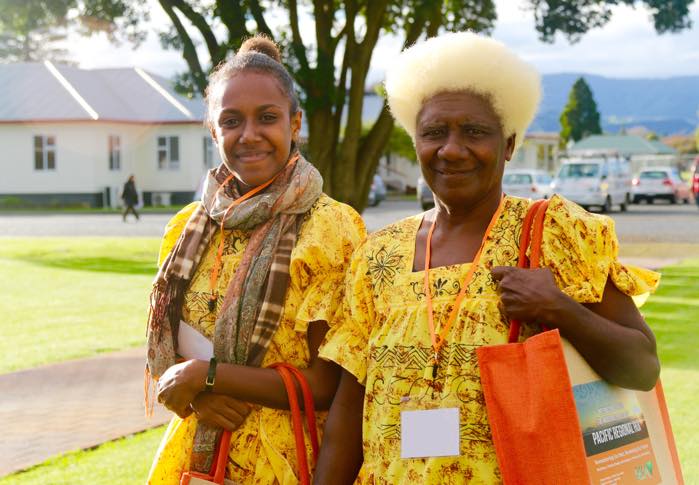 Indigenous delegates from the Pacific island of Vanuatu.

The Trust has had a significant evolution of its philanthropic model from having zero Māori board members to four today.

‘We now have Māori on the table setting the strategic direction of the Trust and increasing investment for Māori development. We have realized the benefits of sharing power with Indigenous Peoples. It is clear that what works for Māori is good for all New Zealanders’, she said.

One of the stirring presentations at the hui was by Woor-Dungin, an aboriginal coalition of organizations and funders from Australia. In the Gunnai language, Woor-Dungin means to share.

Eight members of the coalition took the hui participants on a journey of dadirri, an aboriginal philosophy on listening deeply. ‘Dadirri means listening with all of the senses, not just the ears… It’s a quiet contemplation. It renews us and brings us peace’, said Robyn Latham, a Yamatji woman from Western Australia.

The aboriginal delegation underscored that funders, too, can reap the benefits of practicing dadirri and open their minds to indigenous ideas of well-being for their communities that have survived centuries of oppression. Their message to funders in the room? ‘Walk with us. Not in front of us, not behind us and definitely not over us.’ 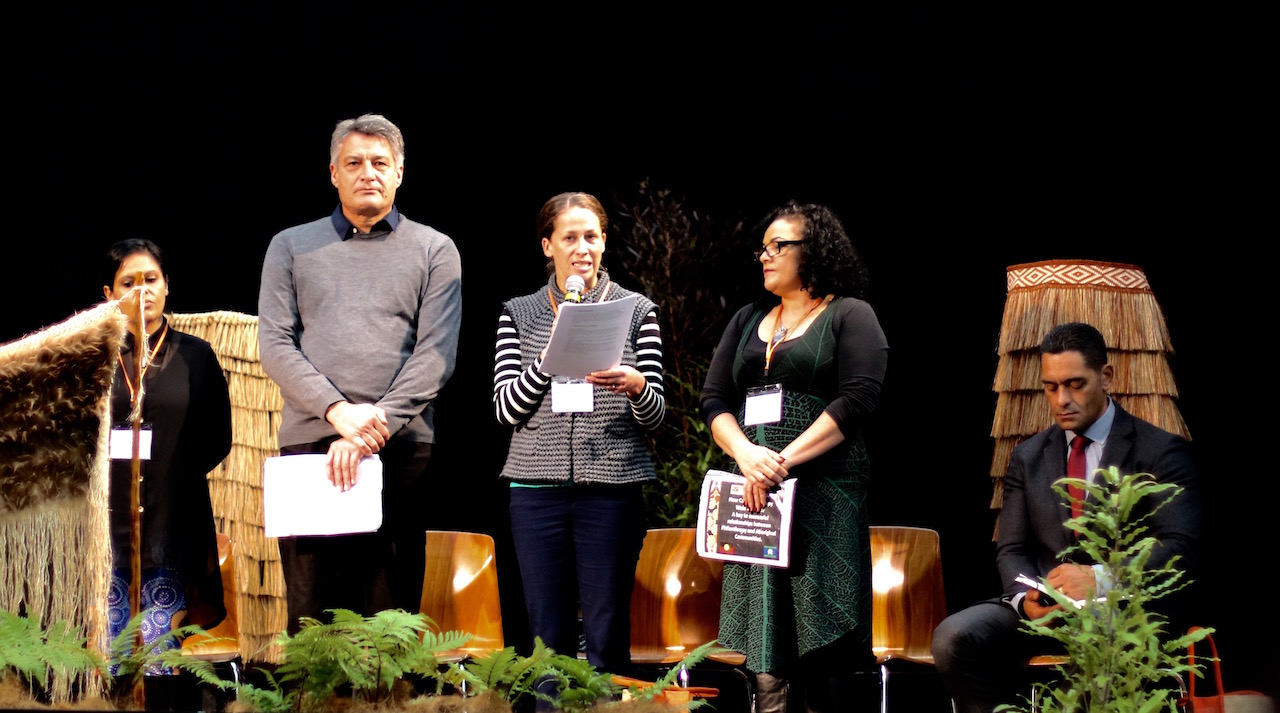 “Walk with us. Not in front of us, not behind us and definitely not over us,” said aboriginal members of Woor-Dungin to funders in the room.

Lourdes Inga concurred. As the executive director of International Funders for Indigenous Peoples (IFIP), a funder affinity group that works to amplify grantmaking to Indigenous Peoples, she has witnessed the unequal power dynamics at play between donors and groups.

‘IFIP sees the profound value in bringing indigenous voices to philanthropic spaces so that funders can move away from transactional relationships to embrace a partnership model that is responsive and respectful of indigenous life plans’, she said.

Meanwhile, Otaki is poised to reach a significant milestone as the first bilingual town in New Zealand. ‘Today Otaki is a different town. Our children speak Māori, and there is no confusion of our identity. We must not re-instate monolingualism. We must resist Crown surveillance and intrusion’, concluded Selby.

Numelin Mahana, an indigenous elder from the South Pacific island nation of Vanuatu, was encouraged by the Māori language revival. ‘Our language is our roots. The Māori are again following the path of their ancestors. It’s not easy, but they are on their way.’

Rucha Chitnis is a communications consultant with International Funders for Indigenous Peoples, in addition to being a photojournalist and a writer.

This article originally appeared on the Indian Country Media Network website on 30 August 2017. The original article can be found here.