The COVID-19 crisis has exposed many flaws in government policies and relationships around the world, from the underfunding of health services to public mistrust of official advice. But in our sector, one of the most disappointing – if unsurprising – revelations has been policymakers’ failure to properly understand or support civil society. 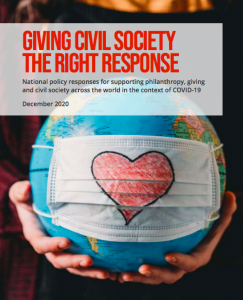 Civil-society organisations (CSOs) have helped raise billions of pounds and mobilised millions of volunteers to help counter the effects of the pandemic and its economic fallout. They have provided a voice and financial and practical support for some of the world’s hardest-hit communities. In Brazil, for example, they organised 10,000 donors to raise £8 million to fund hospitals. In Kenya, they paired poor households with generous better-off ones to create local, informal welfare states. Yet the hugely important efforts of charities, not-for-profit groups and other NGOs have been overlooked, underfunded or even deliberately impeded by governments.

This provides a rare opportunity, however. By making states’ unsatisfactory attitudes toward civil society abundantly clear, the pandemic can create impetus for the sector’s leaders do something about them. To persuade governments that if they value CSOs more, they can help them ease the current situation, prepare for future crises and create long-term positive change, such as meeting the UN’s Sustainable Development Goals.

Failing to partner up

Of the numerous CSOs who contributed to the report – including members of the Euclid network, the European Foundation Centre and the Donors and Foundations Networks in Europe – many reported that governments haven’t called upon their expertise enough during the pandemic.

The view of state policymakers seems to still be that civil society exists as a top-up or added element of their response to a crisis or problem, rather than a partner that can be integral to that response. A global WINGS survey of CSO and funder members found that almost half weren’t working with governments.

There have been some very good examples of state/CSO collaboration. In Tunisia, 600 organisations worked with the government to distribute food to those who needed it. The Indonesian government used CSO information and advice to track COVID-19 cases. But, in general, such partnerships have been lacking. Governments, now and in the future, need to collaborate more with civil society on designing and coordinating policy responses. This shouldn’t just be restricted to crises like COVID-19, but a wide range of issues, from countering poverty to improving women’s rights. New cross-sectoral lobbying and co-working networks and platforms must be set up, involving major philanthropic trusts and corporate donors. More should be done to create government-backed volunteering schemes.

However, governments must avoid relying on the work of CSOs as an alternative to adequate funding for projects that the state could be expected to support. Civil society should not be used to ‘fill the gaps’.

The need to encourage giving

Countless people around the world have donated to COVID-19 related appeals and funds over the last few months. In some cases, governments have added to these totals by providing publicity, organisational support or the likes of match-funding. The Coronavirus Global Response initiative, led by the European Commission, has raised some €16 billion. The UK’s ‘Big Night In’ TV fundraiser raised £170 million, with £85 million coming from the government’s Community Match Challenge. But CSOs and philanthropy organisations report that such initiatives have been too thin on the ground. States must do more to promote giving campaigns, talk up CSOs’ positive role in society and incentivise people to give money to support them. This could include extending payroll giving schemes and making sure overseas donations and resources can flow in, despite borders being closed or closely controlled during the pandemic. Increasing or introducing tax relief on charitable giving could be very effective, too, where state resources allow. For example, earlier in the year Russian policymakers made business donations to NGOs providing social services tax deductible and South Africa increased tax relief from 10% to 20% when giving to the government-backed but independent Solidarity Fund. Such schemes need to be far more commonplace, around the world. And while many countries already operate charitable-giving tax breaks, they are often too complicated to apply for, poorly publicised or limited in scope. Governments should make them more accessible and ensure they apply to common giving transaction methods, such as phone-based donations.

Direct government monetary assistance to keep CSOs going during the pandemic has been far from adequate. In keeping with their general undervaluing of civil society, policymakers have placed them fairly low on the pecking order of bodies needing help. They seem to believe that CSOs can simply put themselves in stasis while times are tough, resuming their work later.

CAF’s global polling earlier in the year found that less than a third of charities felt they could survive for more than a year without additional support, yet by June just four per cent of organisations in a CIVICUS study had received any.

…governments must avoid relying on the work of CSOs as an alternative to adequate funding for projects that the state could be expected to support. Civil society should not be used to ‘fill the gaps’.

As the crisis continues and to help CSOs cope with any future emergencies, states, if they are financially able, need to follow the lead of countries such as the UK, which created a £750 million fund for frontline services and small charities, or Australia and Germany which both offered wage-subsidy schemes. But even these initiatives were insufficient to meet many organisations’ needs, prompting the call for countries to double down on their efforts and go further. Similar schemes in countries such as Turkey were designed for businesses in general and not tailored to CSOs’ specific financial and operating models. Many social enterprises, for example, did not meet the criteria to receive help.

Our research found that be it for what remains of the COVID-19 crisis and recovery period, and into the future, states should look at helping CSOs through varied measures such as grants, underwriting loans, VAT deferrals and setting up sector-specific resilience funds. Further, they must ensure such assistance doesn’t just apply to ‘frontline’ services given that a wide range of groups, from mental-health charities to online arts groups, can and do make a real difference to people and well-being during crises.

Throughout the last few months, the structures and bodies that make it possible for CSOs to operate smoothly, such as fundraising portals and representative bodies, have been vital. They have helped find new sources of money, such as a CAF India appeal raising $1.5 million. CSOs’ voices and influence have been amplified through advocacy and research such as the CAF Global Alliance study on giving trends. Innovative platforms to map societal and resource needs have been established or pivoted towards COVID-19, including the Ukrainian Forum of Philanthropists and Italia Non-Profit. But sector leaders report that such infrastructure has remained sorely underfunded in many countries, particularly when it supports already marginalised or minority communities. There has been a lack of infrastructure coordination with government and within civil society itself, too. So states need to engage more with organisations to get a better idea of what CSOs think and need. They can help achieve this by assisting in sourcing both public and private money to help sustain CSOs.

States working with CSOs, not against

Unfortunately, for varied reasons, several governments have sought to control philanthropic funding in their countries during the crisis. This may, in some cases, be because it makes it quicker to allocate resources. But it also has the effect of financially weakening CSOs and quietening their independent voice representing overlooked groups and state-policy failures. The India PM CARES fund, for instance, has diverted money away from community groups, with some losing up to half their income. In Turkey, the government is insisting all aid flows through it, without any transparency about where the money is going. It has shunned all relief efforts that don’t have its consent, leaving some groups too intimidated to help with the COVID-19 effort at all. Nepal’s centralised relief fund has been dogged by allegations of corruption. Worse, some states’ anti-COVID-19 measures are inhibiting civil liberties and, with them, CSOs’ abilities to do their job. Tanzania has passed laws restricting media freedom and public use of statistics, as the government has claimed the country is COVID-19 free. In Albania, at one point, tanks patrolled the streets. India froze Amnesty International’s bank accounts as part of a wider crackdown. Responsible governments must, of course, avoid such actions, even during what may be tantamount to a national emergency and allow CSOs to speak freely in their criticisms the government. They must ensure CSOs’ work and non-state funding remains independent.

Our new research finds that regardless of wealth or geography, all states need to be mindful of removing less extreme regulatory and legal blocks to the work of civil society. Our report makes the case for all governments to work to reduce the red tape that burdens time-pressed charities, voluntary organisations and other bodies. They also need to be more flexible with reporting guidelines, such as extending deadlines or allowing organisations to hold virtual AGMS. Operational rules should be enforced consistently and poor registration systems should be improved.

CAFs ‘Giving civil society the right response’ report is available to download here. The foundation wants to gather more information about good and bad practices related to COVID-19, around the world. Please email any insights to dferrell@cafonline.org.