In Latin America, Indigenous peoples fight for collective rights in the face of Covid

‘If I become president, I will not give a centimetre more of indigenous lands’, said Jair Bolsonaro as a candidate on the campaign trail in Brazil. After resuming office as the president of Brazil in January 2019, Bolsonaro’s demagoguery and dehumanisation of indigenous peoples has raised fears of an ethnocide, as impunity prevails for human rights violations and illegal logging and mining operations continue unabated in their territories. Last year, Paulo Paulino Guajajara, a young indigenous land defender was killed by illegal loggers in the Araribóia region in Maranhão state.

‘Human rights violations continue in Brazil during Covid’, said Edson Krenak Naknanuk, an indigenous writer and activist during a webinar co-hosted by Cultural Survival and the International Funders for Indigenous Peoples. Cultural Survival is a U.S.-based nonprofit that advocates for the rights of indigenous peoples as they are laid down in the United Nations Declaration on the Rights of Indigenous Peoples. Brazil is home to the largest number of Amazon rainforest communities; nearly 900,000 indigenous peoples from 305 tribes live in one the world’s most critical carbon sink. Brazil also has the second highest cases of coronavirus worldwide, trailing behind the U.S. with the government downplaying the risks early on. 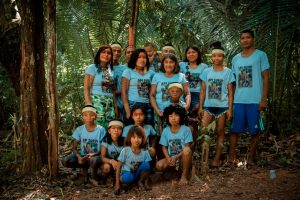 Covid-19 has taken a toll on indigenous peoples in Brazil with infection rates of over 55 per cent in some communities. Keepers of the Earth Fund is mobilising resources to vulnerable communities, like the Surui people, to care for the elderly and sick and offer meals to those in need. Photo: Matania Surui.

Cultural Survival’s ‘Keepers of the Earth Fund’ is mobilising resources to indigenous communities, like the Surui and Krenak peoples who live in remote areas of Northeast Brazil, to step up their response to this public health crisis. They have given over 30 grants in 16 countries to ensure indigenous communities remain healthy during the pandemic by supporting projects to strengthen food and water security and mutual aid activities. Cultural Suvrival’s Community Media Grants Project has distributed over 17 emergency grants to 21 indigenous community radio stations in Mexico and across Central America and Ecuador. Bia’ni Madsa’ Juárez López is an indigenous activist from Mexico who manages this fund. López shared that Cultural Survival has also launched a mapping project to identify how Covid-19 is affecting different indigenous cultures. ‘The governments are not doing this work. In Mexico, it’s a similar situation. We have an institute that works for indigenous peoples but all the data is aggregated. We are 68 indigenous nations in this country, and we are all collected under one group,’ she revealed.

As the only global donor affinity group that advocates to decolonize philanthropy and amplify resources to indigenous-led funds, the International Funders for Indigenous Peoples (IFIP) has been facilitating conversations in the funder community to support indigenous-led movements and groups around the world that are rising up to protect their communities from Covid-19 and grave human rights violations from land grabs, extractive industries, militarism and deliberate neglect.

‘When it comes to indigenous peoples, philanthropy has largely ignored and maintained the status quo of inequities. In this moment of urgency, philanthropy must address its glaring oversight to resource Indigenous-led organisations that are working to address all forms of oppressions, from racial to systemic injustices. IFIP welcomes engagement with thoughtful funders who recognise the need to include indigenous peoples in all decision-making processes of funding,’ said Lourdes Inga, Executive Director of IFIP.

‘Under Bolsonaro, [the government] has legitimised invasions, authorised the registration and the sale of lands in indigenous territories affecting more than 230 reserves,’ said Naknanuk. The environmental minister of Brazil, Ricardo Salles, was caught on video advocating that Brazil capitalise on the pandemic to weaken environmental regulations in indigenous territories. These ominous narratives, Naknanuk believes, are creating an environment of fear and anxiety for indigenous peoples across Brazil.

Naknanuk also contends that Brazil’s Covid-19 public health guidelines are misleading and confusing. ‘They test indigenous peoples outside of the community. If they are positive or negative they are sent back to their communities without any orientation to protect themselves or others,’ he shared.  Meanwhile, those that live in urban areas and test positive for Covid-19 are not counted as indigenous peoples, said Naknanuk. 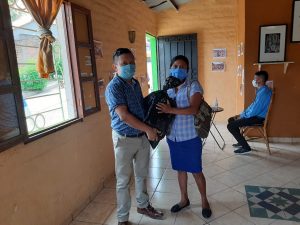 To counter the response of the Brazillian government, Rádio Yandê, the first online indigenous radio station in Brazil, has hosted over 32 shows on Covid-19 offering culturally competent health resources to protect the most vulnerable. ‘Indigenous peoples are keeping vulnerable members of their communities, like elders, more isolated. They are creating more shelters [for them],’ shared Naknanuk.  Cultural Survival’s indigenous radio producers have been ramping up their programming globally to offer information to their communities in multiple languages.

Cesar Gomez is a Maya Poqomam radio producer in Guatemala, who manages community media programs for Cultural Survival. He echoed the concerns and threats shared by Naknanuk in Central America. ‘The public policies of governments are not responding to the needs of indigenous people, and we can see how the privatisation of basic services impedes indigenous peoples’ development,’ he said.  Gomez contended that long before Covid-19 began to devastate indigenous nations, governments were violating International Labor Organization’s Convention 169, as well as the United Nations Declaration on the Rights of Indigenous Peoples. ‘The pandemic represents the greatest threat to ethnocide as governments are not taking into account the inclusion and assistance to indigenous peoples,’ he said.

Gomez observed that the existing health inequities and absence of enough medical centres left many frontline communities particularly vulnerable. Children, too, are bearing the brunt of these inequities as they struggle to access digital technologies to continue their education. ‘Indigenous peoples have much to contribute to [alleviate] the crisis. However, discrimination prevails with the governments in this region,’ Gomez concluded.

These inequities, observes Inga, ripple into the philanthropic community as well. ‘We need to centre equity and justice in philanthropy to address the staggering gap in funding reaching indigenous-led groups and networks. More than ever, funders have an opportunity to step up as allies during this unprecedented crisis as we witness frontline indigenous defenders protect and advocate for their communities against all odds,’ said Inga.

Rucha Chitnis is a photojournalist, an emerging filmmaker and a fellow at the International Women’s Media Foundation.