Philanthropic efforts to address climate change falling short, even according to foundation leaders

Philanthropic foundation’s efforts to address climate change are relatively limited, and non-climate funders see the issue as outside the scope of their mission in many cases, research from the Center for Effective Philanthropy has found. This is despite the overwhelming belief by foundation leaders that climate change is an urgent problem. 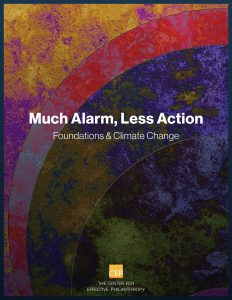 ‘Much Alarm, Less Action: Foundations and Climate Change’ surveyed CEOs of US-based foundations and leaders of US-based nonprofits over the first quarter of 2020 to understand how these organisations approached climate in their work.

‘Much Alarm, Less Action’ was produced with support from the William and Flora Hewlett Foundation. It is available to read or download on cep.org.