EFC AGA 2016: Opening plenary – the time is ripe to do things differently

The stage was set for the opening plenary of the 27th edition of the EFC Annual General Assembly and Conference: Imagining and Investing in our future – in Amsterdam. The auditorium strangely resembled a container of a boat – or perhaps that just me – given the theme of the opening plenary on the refugees and migrant crisis.

Eric and Kinan, the trumpet and clarinet respectively, created haunting atmosphere with a piece that conveyed the lament and the shrill of indignity of millions of refugees and migrants whilst filling the auditorium with a sound that felt a thousand years old: a beguiling combination of east and west – a sense of journey, part snake charmer part lilting lullaby – a lament centuries old – calling out to the world to see sense – ironically named Adventure No1!

Kajsa Ollongren, Deputy Mayor of Amsterdam
‘The refugee crisis – alleviating today’s needs while developing tomorrow’s solutions’ was the brief for the opening session and this was served up relatively well. The Deputy Mayor of Amsterdam, provided the oeuvre with an upbeat sense of how a city with a tradition of giving had adapted itself to challenging times using social innovation as a premium and collaboration as a mindset.

Building on its tradition of giving, Amsterdam set about to create a space for giving by signing up to a covenant across sectors to invest in solving social challenges – it took imagination and to think differently to open minds to new partners and ways of working to solve big social issues – leadership from the municipality was evidently key to creating momentum. Public private partnerships, as well as the more effective use of learning, sharing of resources in a more coherent and coordinated manner, with equality as a key driver, appear to be the key characteristics of this approach.

Ollongren described Amsterdam as a large living lab and spoke to the theme of the AGA of imagining differently – proof is always in eating the pudding – or in the detail. Grand words and a welcome approach – and perhaps learning for other cities. It was a fitting optimistic frame for what was to come next. 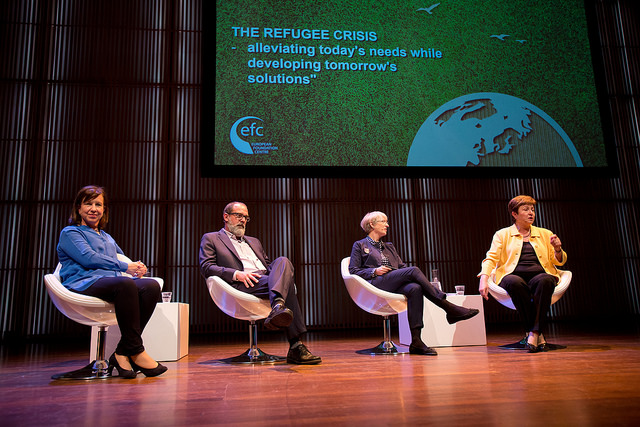 Lyse Doucet, BBC Chief International Correspondent
Lyse Doucet invoked Dickens by describing where the world finds itself ‘we are in the best of times and the worst of times’ – this resonated well and become a recurrent theme for the session. Her presentation reminded me of a fine monologue, a monologue of the plight we’re in and that of the millions of people on the move around the globe. In the best tradition of theatre – it was paced and well timed, creating effective images through story telling of the children and people she’s met during her reporting stints across Europe and Syria. Doucet spoke eloquently and had the audience listening and watching intently, delivering a powerful performance recalling an incident on the eve of 2015 when a dingy boat carrying hundreds of refugees was rescued and how for her this was the sign of something much powerful to hit the shores of Europe.

She reminded all of us of what’s at stake by not learning from the past, by not recognising that the system for tackling refugees is broken, and by not keeping our promises to those we commit to help. She urged collaboration and the need to reappraise our current capacities as what is termed a crisis is the new normal for Europe and the wider world.

Doucet prioritised education as a key policy and funding issue. It is essential to invest in the future of a more stable and effective Europe, starting by ensuring that refugees and migrants receive a similar quality of education access and support. Now and not in the distant future.

“Asking the right questions is as important as getting an answer” was her parting shot in what was regarded as a tour de force presentation. My own take away from her presentation was a in the following message: “Miracles are when people do the best they can to change a bad situation into a good one.”

Peter Bouckaert, Director of emergencies human rights watch
Peter Bouckaert started by stating that the refugee crisis was like working in a war zone. In his work on the frontline he had a frequent sense of the absence of a European institutional response. He poignantly drew on figures of the flow of migrants noting that even if the flow of people remained at current levels until the end of 2017 they would still only represent 0.74% of Europe’s population – in stark comparison to Lebanon’s current 25%.

He made an impassioned point that Europe can’t outsource its responsibility for the refugee/migrant crisis and that the current system is broken; that the Dublin regulation is outdated and unfair; and needed to change definitions and distinctions. He warned that there was an urgency to reclaim the leadership of Europe from the right to values enshrined in the EU and human rights. These festering wounds cannot be ignored.

Kristalina Georgieva Vice President EC commissioner for budget and human resources
Kristalina Georgieva took the stage and stole the show. Human, authentic, pragmatic and above all conveyed a leadership style missing from a lot of political dialogue at the moment. She read the runes in 2013 when Suni and Shia began fighting and the growth of movements that are not seeking recognition but to scare and hurt which have led to the slow movement and displacement of people.

No more we can pretend that it’s not a European problem and noted a slow tsunami moving towards europe. A tsunami that will not just pass us by.

Georgieva reinforced the point made earlier that the crisis is no longer; it’s a new reality of the state of Europe. For her, one key to the current debacle is to introduce a common asylum system and processing – 28 separate approaches can’t work. She also recognised the need to compliment this approach with the protection of our external borders in order to dismantle the internal border being erected either by member states and by people as well as the need to continue to fight the traffickers.

Remarking on the generosity of people across a Europe, Georgieva warned of the danger of visibility of hate and anger – sometimes understandable but that goodness is silent and often not heard:’we need to amplify the voice of goodness’. “It’s our responsibility” she challenged the audience “you have chosen to work for good and now you must have the bravery to fight for goodness to prevail and to do the right thing”. Focusing in on the politicians she stated “they know what the right think to is but don’t know how to get re-elected whilst doing it… that time had passed and it’s nowtime to simply do the right thing and not worry about re-election.”

Like the other speakers, she too felt that the system was broken and argued the need of a new one but one that is collaborative and cross sector, bringing resources in a coordinated and coherent manner to support people in crisis. Foundations must take advantage of the greater flexibility they enjoy – ‘you can improve social innovation’. The agility to move resources was key, ‘forget about planning on an annual basis but move to a multi-annual basis’. Move from simply control to being proactive and forward thinking – perhaps this was a message for the EC as much as for the audience. These were bold words from a bold and well meaning politician. If only this was a shared view among her colleagues back at the ranch.

Georgieva delivered a powerful punch – and a fitting end to a plenary that was perhaps low on policy ideas but strong on the incontrovertible truth; the time is ripe to do things differently. A mandate is apparent if only action from across all sectors filled the gaping vacuum of concerted leadership. Recalling the shrill lament of the trumpet and the clarinet – you were left with the haunting melody that demands sombre reaction and a call to arms.

Dharmendra Kanani is a consultant.