Philanthropy in Asia Summit 2014: bringing Asian philanthropy under one roof

The second Philanthropy in Asia Summit (PIA) was held on 20–21 October in the main chamber of Singapore’s historic Old Parliament building – a stunning reminder of Britain’s colonial legacy of adversarial politics – nestled today between the skyscrapers of the central business district and the Marina Bay Sands casino complex. The PIA, first held two years ago, is organized by the National Volunteer & Philanthropy Centre, the Community Foundation of Singapore and the Global Philanthropy Forum. It’s an invitation-only event, and the lack of a participants’ list made it impossible to know who was really there and plan ahead for networking – a real lost opportunity.

Due to a last minute speaker cancellation, the opening keynote was given by Audette Exel, founder and chair of the Australian-based ISIS Foundation (yes, indeed they are rebranding – to ‘Adara’ – to avoid being confused with global terrorism). By way of a slightly stereotyped critique of ‘traditional’ philanthropy, she explained how ISIS is a new approach to ‘modelling business for purpose’ and how the foundation focuses on the rescue of children exploited for sex trafficking in Africa and Asia. I was disappointed that during an audience question about connecting the investment bank’s core business to the foundation’s mission, she stuck to the slightly dated proposition that the two are wholly separate – whereas new thinking on mission-connected investment I think offers a route for aligning both.

Crystal Hayling and Prapti Upadhyay gave a plenary presentation of Levers for Change – a report on the Lien Centre’s research on ecosystem and regulatory environment for four South East Asian countries. Despite enormous wealth creation in the region, professional, organized philanthropy practice is patchy at best (an observation others have made), held back by a lack of philanthropy ‘infrastructure’ – tax incentives, government policy, information about non-profits, collaboration and research. Despite the growing pains of Asian philanthropy there are plenty of innovations and initiatives – creative religious giving, corporate giving, giving circles and other forms of community philanthropy.

The simultaneous breakout sessions on Day 1 explored three themes, transparency, collaboration and innovation. The session I participated in discussed collaboration. Laurence Lien from the Community Foundation of Singapore offered insights into why philanthropists and foundations find working together so hard (‘big egos, poor leadership’) and described how the community foundation provides a natural platform for donors to collaborate. Veronica Colondam from Indonesia’s YCAB business/foundation group described how their pioneering work in Indonesian social investment is supported by collaborations with blue-chip consulting groups like Accenture and Boston Consulting. I contributed a summary of my research on giving circles in Asia – an example of citizen collaboration that lowers the barrier to engaging in philanthropy by sharing risk and resources.

The brilliant Sketch Post Studio graphic artist (sketchpoststudio.com) captured many of the sessions on an illustrated one-pager that put my own note taking to shame. 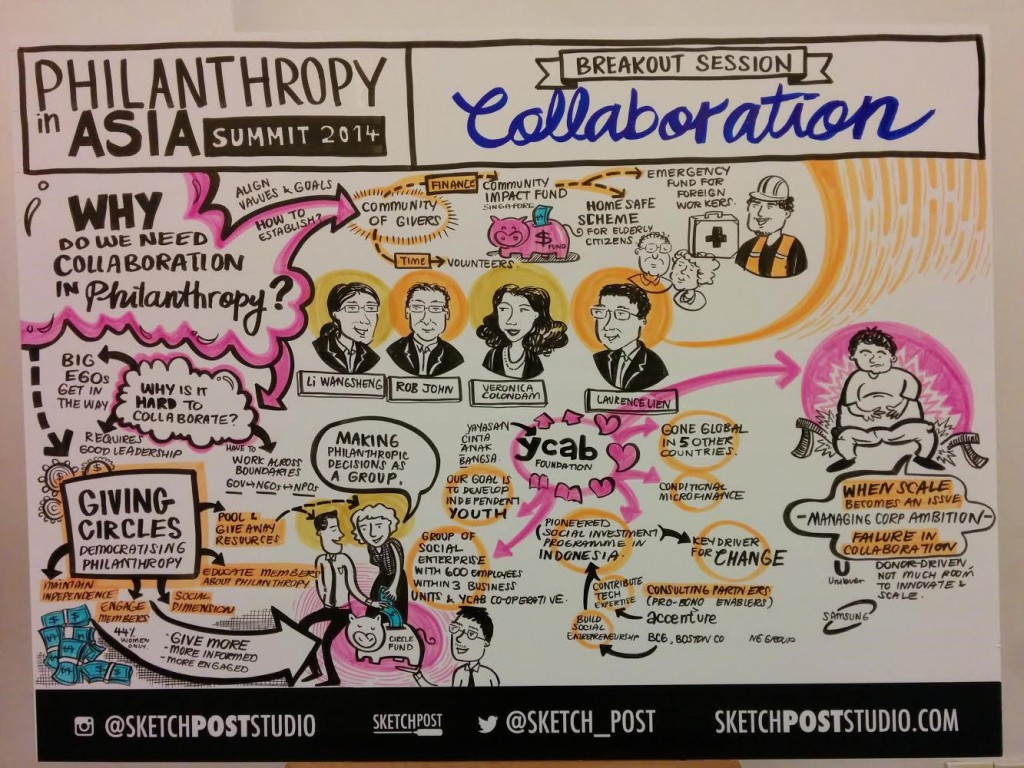 Marcus Neto from UNDP in New York, speaking in the opening plenary on day two, helped us understand what is happening now that the Millennium Development Goals are coming to an end and being replaced by a new and much more comprehensive set of ‘Sustainable Development Goals’ in what looks like a much more participatory process than the top-down launch of the MDGs. Angela Hariche from the US-based Foundation Center and Heather Grady from Rockefeller Philanthropy Advisors (RPA) explained how they are working to provide a platform for philanthropy to be a key part of implementing the new Goals, through pilots in five countries.

Seeing Foundation Center and RPA on stage made me wonder where was European philanthropy at this summit? I didn’t see any participation from the European Foundation Centre or the UK’s Association of Charitable Foundations, for example. Such a pity that the US seems to be the only go-to place for Asian philanthropists. It was also a shame not to see anyone from Dasra at the summit (see my blog on Dasra’s Indian Philanthropy Forum held in Mumbai last March) – I would really encourage Dasra and PIA to talk to each other since both are major convenors of philanthropy thought leadership in Asia. AVPN is probably the only other event that gathers philanthropists, philanthropoids and impact investors under one roof in Asia.

Ayala Corporation is one of the biggest industrial conglomerates in the Philippines, and has long been associated with generous and innovative philanthropy. Ayala’s president, Fernando Zobel de Ayala, was interviewed about how his family and their business evolved from ‘philanthropy to shared value’. In the 1960s the family foundation started to get more ‘deliberate’ about giving back to Philippine society through grantmaking, then moved to more strategic CSR initiatives through the group’s businesses. Today it embraces the model of ‘shared value’ where creating shareholder and social value are intertwined through the way the corporation does business. While some grantmaking (in the arts and museums) continues, Fernando was absolutely clear that shared value is the ‘sea change’ proposition for the corporation and the family. One example is the company bidding to take over Manila’s water supply when the utility was privatized. Today Ayala has created a ‘water ecosystem’ in Manila that ensures secure, clean water supplies – affordable for the poorest, subsidized by the wealthy and business. To have reached such an equitable outcome through philanthropy would have been impossible. Ayala is taking this shared value model into education and financial inclusion.

It was a good conference, excellently organized in the Singaporean manner. It would have been even better if connected to European and Indian thought leadership.

Rob John is a visiting fellow at the Asia Centre for Social Entrepreneurship & Philanthropy at NUS Business School, Singapore, and co-founder of the Asian Venture Philanthropy Network.