Zimbabwe is in the clasp of a crippling economic crisis resulting from a mix of climate change disasters and fiscal policies enacted by President Emmerson Mnangagwa’s government.

Millions of people in the country continue to slide deeper into poverty, while at the same time struggling with the ever-increasing effects of climate change. Health and educational facilities are run down, and unemployment figures continue to skyrocket.

But amid the devastating cyclones, droughts, cholera, and Covid-19 disasters, philanthropy has helped to alleviate the burden of millions of hard-up Zimbabweans.

Cycle Idai and other natural disasters 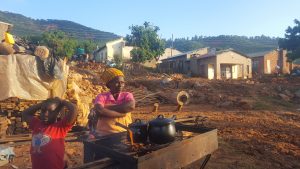 A woman looks dejected as she prepares a meal after Cylcone Idai in Chimanimani, Zimbabwe. Photo credit: Kenneth Matimaire

Cyclone Idai, which ravaged Zimbabwe, Malawi, and Mozambique in 2019, uncovered how the countries in the region continue to be ill-prepared amid escalating climate change disasters.

And in her recent audit report, Zimbabwe’s auditor-general, Mildred Chisi revealed that: ‘The unimaginable and colossal damage inflicted by Cyclone Idai caught the Civil Protection Organisation unaware and ill-prepared to deal with the disaster of such a magnitude. There were no robust and water-tight procedures and policies designed to match and address emergency disasters of the kind posed by Cyclone Idai’.

The cyclone hit the country when millions of people were on the brink of starvation from a severe drought between 2018-2020. Droughts, like cyclones, are becoming more frequent and experts have linked these disasters to climate change.

A report published by ReliefWeb said Cyclone Idai affected up to 270,000 people in Zimbabwe killing more than 340 with Chimanimani and Chipinge districts being hit hardest by the catastrophic storm.

However, small and large donations from various philanthropists – including the country’s billionaire telecom businessman, Strive Masiyiwa – have come to the rescue of thousands of people affected Cyclone Idai and other disasters in Zimbabwe.

And the Philanthropy News Digest revealed that philanthropy ‘has a key role to play in catalysing financing in support of climate mitigation efforts in Africa — efforts with the potential to boost economic and or social development by increasing productivity and reducing poverty, unemployment and inequality’.

Joseph Maphosa, a Chimanimani based musician who survived Cyclone Idai by a whisker said some of the victims received assistance from Masiyiwa’s telecom company, Econet.

‘Yes, it is true [cyclone victims got assistance from Econet] but the company has not yet built houses for the victims as it had promised,’ Maphosa told Alliance.

‘I do believe that for every problem that someone has, there is someone somewhere willing to help. The biggest challenge has always been how to connect the two. There are issues of lack of access, lack of trust and general lack of conduits that have real empathy. Every day when we connect the needy with the help it gives me more impetus and drive,’ Freeman Chari, a Zimbabwean entrepreneur and philanthropist based in the US told Alliance.

Chari who is also the president of Citizens Initiative — a robust initiative that raised thousands of dollars for Cyclone Idai victims — said there were a lot of people and corporations that give globally but there was a lot of reactionary giving instead of pro-active and preventive giving. 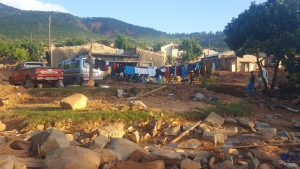 ‘When you look at Chimanimani [Cyclone Idai], I believe aid organisations have used upwards of $50 million keeping people in tents, feeding them for 16 months, whereas half of that amount could have really come in handy, way before the cyclone happened. We already knew what happened after the previous cyclones, we knew pretty much about the seismic activities that were happening around the area. What if we had invested in moving people who lived in low lying areas like Jopa [in Chimanimani district]? Maybe early warning and evacuation systems,’ Chari said.

Initially, the Citizens Initiative targeted to raise at least $10,000 for emergency relief of the affected communities after Cyclone Idai like providing non-perishable foods, clean bottled water, blankets and tents for displaced people.

However, they managed to raise $100,000 which was channelled towards the long-term needs of the affected people like rehabilitation of schools.

Experts say philanthropic funds in Africa can be spent on actions and research that can reduce the impacts of climate change at the same time helping people who have already been affected by climate-related catastrophes.

And Chimanimani based philanthropist and businesswoman, Jane High has embarked on the rehabilitation of young people affected by the cyclone through her Matsetso Stars Sport for Conservation.

An eighteen-year-old golfer, Trust Makanidzani who suffered life-threatening injuries during the Cyclone Idai is slowly coming back to competitive golfing, thanks to High and other philanthropists who financed his medical bills.

I do believe that for every problem that someone has, there is someone somewhere willing to help. The biggest challenge has always been how to connect the two.

‘[We’re] assisting [young people] with ideas to give them better opportunities for their future. All geared towards livelihood training,’ said High who owns Frog & Fern Cottages in Chimanimani district.

However, on a larger scale, the William and Flora Hewlett Foundation said philanthropists around the world could support the many countries to achieve their Paris commitments.

But Chari commended organisations that continue to help people affected by climate disasters in Zimbabwe.

‘I think we have to also become creative in the way we assist so that we do not create perpetually dependent people. There is a lot of help that is still needed in Chimanimani,’ Chari said.

He added that a lot of families in Chimanimani had not yet gone back to their old homes because there was nowhere to go.

‘A lot of lives were disrupted. Unfortunately, the world moves on very quickly. It is left to a few people to continue to help others to live again. Those people deserve our gratitude,’ he said

I think we have to also become creative in the way we assist so and that we do not create perpetually dependent people.!