Alwaleed Philanthropies has announced $30 million to the battle against COVID-19. Of the pledge, $20.6 million is new funding and $9.4 million is existing support that has been reallocated. The funding, which has been pledged in partnership with a number of organisations including the Bill & Melinda Gates Foundation, will go toward enabling better hygiene, improving testing capabilities in developing countries, and providing long-term economic solutions.

The funds follow a move by HRH Prince Alwaleed Bin Talal Bin Abdulaziz Al Saud, Chair of Alwaleed Philanthropies, to make available all of his properties for Saudi Arabia’s fight against COVID-19. The foundation has also been working to repatriate Lebanese students stranded in Europe during the coronavirus crisis. 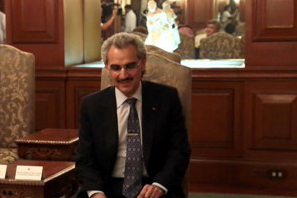 Prince Al Waleed Bin Talal at the Malacañan Palace in the Philippines in 2016. Photo courtesy of the Malacañang Photo Bureau via Wikimedia Commons.

‘In these times of unprecedented crisis it is more important than ever that we pull our resources together in the battle against Covid-19,’ Prince Alwaleed said.

The funds will support a number of initiatives in the Middle East and North Africa, including toward UN-Habitat to improve water, sanitation and hygiene in the most vulnerable communities and to establish shelter and rehabilitate damaged housings in order to address overcrowding and enable social and physical distancing in disadvantaged neighbourhoods. It will also support work by the Islamic World Educational, Scientific and Cultural Organisation (ICESCO) in mitigating the crisis in Africa by strengthening local manufacturing capabilities to produce hygiene products and protective equipment.

Alwaleed Philanthropies will also be partnering with the Gates Philanthropy Partners to fund a number of health projects to expedite the development of therapeutics and delivery of diagnostics to protect the vulnerable in Africa.

The new funding pledge also includes an allocation to the Africa Centres for Disease Control and Prevention to facilitate additional diagnostic laboratories and testing capabilities throughout the continent.

‘With many developed nations struggling to cope with the Covid-19 pandemic, we must spare a thought for the developing countries of Africa and the less fortunate countries in the Middle East,’ Prince Alwaleed said.

Through Alwaleed Philanthropies, Price Alwaleed has supported education, community development, and disaster relief in his philanthropic career. Alwaleed Philanthropies has also been a funder of healthcare causes before the current global health crisis – in September 2019, the foundation allocated $5 million in partnership with Gavi, which it is working with currently, to prevent the spread of disease in low-income urban areas.

The foundation also aspires to promote women’s empowerment and equality both outwardly and inwardly. Alwaleed Philanthropies, which is currently managed by ten Saudi female members, champions causes supporting women around the world, such as working with training and employment programmes for women.

Prince Alwaleed was arrested in 2017 on charges brought against him following an anti-corruption crackdown led by Crown Prince Mohammad Bin Salman. As many as 500 people, including Saudi royals, politicians, businessmen, and religious clerics, were rounded up in the sweep, which some have speculated had deeper motivations than just ending corruption among Saudi’s wealthy. Prince Alwaleed was released in early 2018 following a financial settlement about which details remain obscure. Once valued at $18.7 billion, he has now been dropped off the Forbes World Billionaires List owing to a lack of current information.