In the summer of 2015, first hundreds, then thousands, of refugee families started to appear in the parks around Belgrade’s bus and railway station. Though they moved on, they were replaced by others, sleeping in the open without basic sanitary facilities. A humanitarian disaster was imminent. The Ana and Vlade Divac Foundation, an organization founded to provide support to refugees from the Balkan wars of the nineties, immediately took action in partnership with numerous other domestic non-profit organizations and volunteer initiatives.

On the 20th anniversary of a key event in the war in Croatia that resulted in the displacement of thousands of Serbian families, this group issued a call for solidarity with these new refugee groups. Hundreds of people converged on Mikser House, a cultural centre near where the refugees were congregating, with the public, local companies, non-profit organizations and the media providing donations of food, water, clothing and hygiene supplies.

This was the start of an unprecedented mobilization of goodwill and compassion from ordinary citizens. Together with its partners and volunteers, the Divac Foundation used its name and reputation to advocate for greater action by the local and national authorities, while also seeking to provide solutions to the short-term transit needs of the refugees passing through Belgrade. 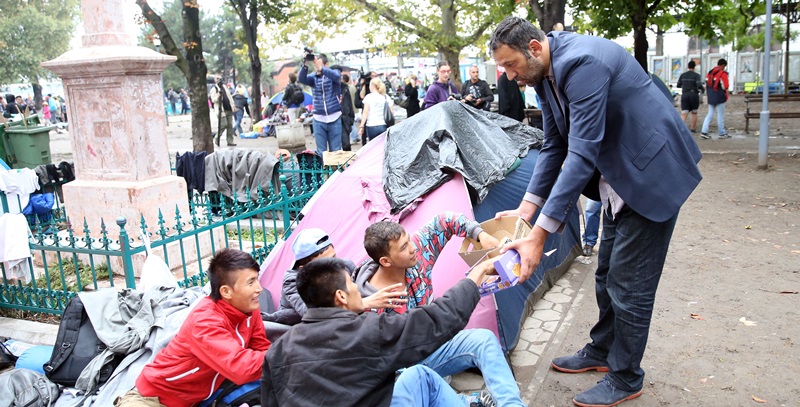 Soon, donations of cash, goods and volunteer time began pouring in. Ten corporate donors provided funds to rent mobile toilets in the parks and other places where refugees gathered. Additional donations of food and emergency supplies were made not only by people and business in Belgrade, but from neighbouring countries including Croatia, Bosnia, and Montenegro. Mikser House converted Miksaliste, an outdoor events space near the parks, into a distribution centre for refugee aid, which quickly became a focal point for volunteer mobilization and for the drop-off of donations. Teams of international volunteers also begin to flow into Serbia as traditional international humanitarian organizations also began to mobilize. The Divac Foundation provided logistic and infrastructure support renovating Miksaliste and expanding its capacity and the Foundation continues to leverage philanthropic resources to support its operations.

In addition, the Foundation’s founders, NBA basketball player, Vlade Divac and his wife Ana brought together the country’s key religious leaders – Orthodox, Catholic, Jewish and Muslim – in the park, an event that sent a powerful message of unity regardless of religion and nationality. The Foundation and religious leaders served a meal, talked with the refugees and publicly pledged their help. As well as prompting more donations, this action helped to change people’s awareness about the situation.

People set aside politics and their personal and family problems in recognition of the suffering that refugee families were encountering. Time and time again, refugees have told foundation staff and volunteers that Serbia and its people have shown the greatest hospitality and have provided more support than any other country on the Balkan refugee route. Perhaps the wars of the nineties, the understanding of what it means to be a refugee and how it can happen suddenly is what helped to elicit this sympathy and solidarity among Serbians.

From Autumn 2015 onward, the Serbian government began to organize its response more effectively and much of the refugee support effort began to be directed to the border towns. Our foundation established teams on the borders with Croatia and Bulgaria and formed mobile teams that provided assistance 24 hours a day. It also formed partnerships with larger international humanitarian organizations like Catholic Relief Services, International Rescue Committee, Mercy Corps and the Norwegian and American Embassies working in the area. All told, our foundation has distributed over 100 tons of food, clothing, hygiene kits and other non-food items to more than 100,000 refugees.

Since the closure of the Balkan route in March this year, approximately 2,000 refugees remain in legal limbo in Serbia and are currently accommodated in asylum centres in small communities throughout Serbia. We continue to work to increase awareness about refugee needs and to channel the goodwill of Serbian citizens and companies into an increased understanding of the long-terms needs of these recent arrivals in Serbia, some of whom may now stay. The positive involvement of the local community is needed in efforts to provide occupational activities, vocational training and improved accommodation standards.

As Vlade Divac said in the park last summer, all people in need deserve help, no matter their religion, age or skin colour. This has been our guiding mission as we continue to support refugees in Serbia and we are proud of the support we have received from the country’s people, business and non-profit sectors.

Ana Koeshall is director at Ana and Vlade Divac Foundation.