Dr Tedros: There is great potential and need for philanthropy to partner with the global health field

Alliance magazine exclusive – In a wide ranging and poignant interview, the Director-General of the World Health Organisation Dr Tedros Adhanom Ghebreyesus has called on philanthropic foundations to advocate for increased investment in public health, redouble efforts to ensure philanthropic funding aligns with country and community needs, and stand up for the values underpinning international co-operation. 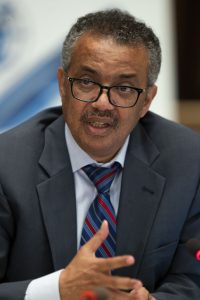 His call to the global philanthropy community – which spends $46 billion each year on health related causes – comes in the new issue of Alliance magazine dedicated to global health philanthropy, published today. In a dialogue with Professor Senait Fisseha, a public health expert and director of global programs at the Susan Thompson Buffett Foundation, Dr Tedros praised the philanthropic response to the Covid-19 pandemic and singled out philanthropy’s role in ‘building up the health systems of individual countries’ as well as investing in global and regional institutions like WHO and Africa CDC. Tedros said that philanthropy’s response  was ‘very encouraging’ and said of Foundations that their ‘flexibility has helped them move quickly to change their priorities.’ 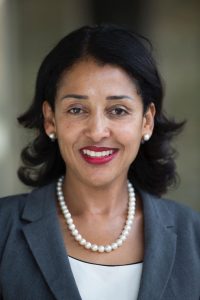 Indeed, some of the world’s leading foundations are behind record-breaking vaccine discoveries this year. These include the Bill & Melinda Gates Foundation, and the UK’s Wellcome Trust who write in the new issue of Alliance about Wellcome’s support for the Coalition for Epidemic Preparedness Innovations (CEPI), which drew on lessons from Ebola and funded the development of the Moderna vaccine proven to be above 90 per cent effective, among a number of other trials.

A space for philanthropy at the World Health Organisation

Noting philanthropy’s positive contribution, Dr Tedros urged more private foundations and donors to support the WHO alongside member states. However, he cautioned that ‘all funding and partnerships [should be] in alignment with a country’s priorities’ irrespective of whether a donor is public or private. ‘There is great potential, and great need, for the philanthropic sector to partner with WHO and health organisations around the world… if you agree on the objectives, especially at country level, then you can cooperate with anyone because your interests are aligned.’

Tedros also welcomed the ‘passion’ which Foundations bring while encouraging them to consider providing more non-earmarked funding. Such funding remains critical to the WHO’s ability to respond to priorities, he noted. ‘…Passion is very important, but it is essential that action reflects the needs on the ground, in the country. This is why flexibility in funding is important.’

The strategy to pursue more flexible funding and reduce dependence on a small set of donors was part of the impetus for the launch of the WHO Foundation earlier this year. That need was brought into sharp focus by the withdrawal of US government funding by President Trump in April, though WHO plans were already in motion, forming a key part of a ‘transformation’ agenda officially launched in early 2019 and conceived of by Dr Tedros and WHO leadership near the start of his tenure in 2017.

‘Generating more flexible funding is part of WHO’s transformation so it can be fit for the future,’ Tedros noted.

The WHO Foundation itself has received support from significant funders across the political spectrum, including the Gates Foundation, Open Society Foundations and the Susan Thompson Buffett Foundation – named after Warren Buffett’s late wife – which spent almost $800 million in 2017/18 on health-related causes according to data from Candid.

A year of unnecessary suffering

While fears around US support for the WHO may have been allayed by the election of Joe Biden who has indicated that he will reverse the US withdrawal from the WHO, the needs placed upon the organisation during the coming months – which may be the toughest of the pandemic, as well as beyond when a global vaccine strategy will be rolled out – are great.

But it’s not just funding that the WHO and other global and public health bodies have been calling for – it’s unity and international co-operation. Political disputes have in some cases undermined efforts to contain the pandemic, even contributing to the tragic death toll – now estimated at almost 1.5 million people worldwide.

‘I still believe the politicisation was a key reason behind all these deaths. In WHO, we saw it coming.’ Holding back tears, Tedros said:

‘It’s just like when you feel something, when you see something, when you’re worried about something, when you see the trends, you develop this fear inside, ‘Oh we’re heading this way’. We could see that trend. It’s not without reason by the way, it’s not without evidence. We could see the trend. The only thing you need to do is to connect the dots. When you look back now, and consider the number of deaths we see today, this was actually a very insignificant representation of this situation now, so what we said was true, we wish it wasn’t true. And it’s very sad and it could have been prevented.’

Tedros urged foundations to use their power to advocate for investment in public health and specifically to ‘put pressure on those high-income countries’ who are undermining primary healthcare and public health to urgently change course and prevent more avoidable deaths.

‘Losing more than a million people is a disaster… many of these deaths could have been averted if we had a strong primary healthcare and strong public health. It’s very strange to see that the death toll and infection rates are higher in high-income countries. The reason for that is they have invested in medicine but neglected public health and primary healthcare. WHO is for high income countries too, and philanthropy can advocate for that,’ Tedros said.

A sea change in how global health is funded may already be underway. In September, the UK government announced that it would be increasing its WHO funding by 30 per cent or £340 million, a plan developed ‘in consultation’ with the Gates Foundation and the Wellcome Trust according to reports.

There is great potential, and great need, for the philanthropic sector to partner with WHO and health organisations around the world… if you agree on the objectives, especially at country level, then you can cooperate with anyone because your interests are aligned.

When Alliance asked about the Wellcome Trust’s involvement with the plan, Director of Strategy Ed Whiting shared: ‘We’ve been entirely clear and open that we will argue for an effective WHO in any room we’re in. We’ve been absolutely clear with the British government and other governments that support and investment into the WHO, which it urgently needs, is absolutely critical. We were completely open about saying that to the British government, and we were delighted to see the increased investment.’

Tedros also emphasised the area of sexual and reproductive health and rights (SRHR) – which represents only six per cent of all health funding – as a potential area of partnership between philanthropy and WHO. Tedros noted that SRHR had been ‘a contentious issue in global health even before this emergency’ but no more. Now it is a central and visible part of its strategy. 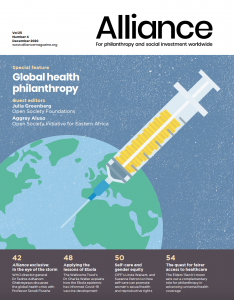 Dr Tedros’s views on philanthropy’s contribution to the global public health space were echoed by Ban Ki-moon, former UN Secretary General and vice chair of The Elders. Writing in Alliance, Ban argued that philanthropy, which has a long tradition of funding health services and research, now needs to play an equally strong role in ensuring fair access to healthcare in the wake of Covid-19.

And while philanthropy’s involvement in global public health appears set to grow, new concerns are being raised about the risks that investments made by philanthropic donors in healthcare systems around the world too often reinforce arrangements that favour private interests over public provision. Julia Greenberg and Aggrey Aluso of the Open Society Foundations, who guest edited the Alliance issue, argue that philanthropy needs to urgently embrace more citizen centred approaches to public health and improve their accountability.

‘The inability to see how healthcare systems are being financed is particularly damaging because it undermines the efforts of citizens to advocate for alternative healthcare models,’ wrote Greenberg and Aluso in a lead article, setting out an agenda for global health philanthropy in the years ahead.

Subscribe today to receive a copy of the issue.

Charles Keidan is Executive Editor of Alliance, and Elika Roohi is Digital Editor.