The history of philanthropy & social movements for diversity, equity and inclusion

In recent weeks, the tragic killing of George Floyd and the subsequent wave of protest around the globe has brought the Black Lives Matter (BLM) movement back to the forefront of public and political attention. This is clearly a reflection of ongoing challenges regarding systemic racial inequality and violence in our societies, but at the same time it also exemplifies a wider phenomenon: in that we are increasingly seeing new technology-driven protest movements (such as BLM, #MeToo and Extinction Rebellion) at the forefront of efforts to push for change.

What does this mean for traditional civil society organisations (CSOs) and funders? Does the success of these networked movements demonstrate the potential for working in different ways, using non-hierarchical or decentralised governance structures? Does it offer new opportunities for collaboration between existing organisations and movements? Or will the two increasingly find themselves in competition?

The answers to these crucial questions are not yet clear. However, looking back to the past can offer a valuable source of insight, as there are many examples of the interaction between philanthropy and social movements that can shed light on some of the major challenges and opportunities that coming years may bring. 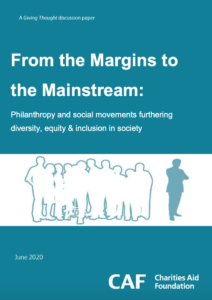 In a new CAF discussion paper ‘From the Margins to the Mainstream: Philanthropy and social movements for diversity, equity & inclusion in society’, we explore what a range of historical examples can tell us about the complex relationship between philanthropic funders and movements that have sought to further diversity, equity and inclusion. A number of clear positive and negative themes emerge.

One of the key strengths of philanthropic funding is that by its nature it can take greater risks when it comes to supporting unpopular causes (as it is not accountable to voters or shareholders), so it has often played an instrumental role in funding rights-based campaigns in their very early stages when public support is low and funding hard to come by. This is arguably what makes philanthropy a crucial part of a democracy, as it can help to overcome the tyranny of the majority that can result through the ballot box- where minority groups struggle to have their voices heard because they never have sufficient numbers to exert influence through voting.

An additional benefit that philanthropy can often bring, apart from just the money, is legitimacy for a cause. In the early days of LGBT philanthropy in the US in the 1970s, for instance, the field relied on a handful of foundations that were themselves from within the gay and lesbian communities, such as the Astraea Foundation and the Horizons Foundation. But in the 1980s, as the AIDS epidemic grew, well-known funders such as the Geffen Foundation and companies such as Ben & Jerry’s and Levis moved into the space too, bringing with them not only additional money but also greater public profile and a sense of mainstream acceptance of the cause.

One challenge we see clearly in many examples is the tension between idealism and pragmatism. Philanthropic funders and charitable organisations have, by their nature, usually erred towards gradual change and the need to work within existing systems. But this has often brought them into conflict with those who favour more radical action and believe in the need to reform society more fundamentally. And even where these relationships do exist, there is always a danger of ‘movement capture’ occurring: in which funders deliberately or inadvertently push movements away from pursuing more radical goals or adopting more controversial tactics (as explored by the political scientist Megan Ming Francis in her study of the relationship between the Garland Fund and the NAACP in the early 20th century).

It is also the case that many models of philanthropy (either by accident or design) embody existing power dynamics and notions of patronage or gratitude on the part of the recipient. For many social change campaigners this is anathema because it prevents the kinds of reform they deem truly necessary. Hence from early women’s rights pioneers like Mary Wollstonecraft, to modern disability rights protesters, the demand for ‘justice, not charity’ has long been a rallying cry.

The other big challenge that history highlights is that of ‘hyperpluralism’: where a movement can over time splinter into many sub-movements, each with their own priorities and approach, and as result it is hard to maintain overall coherence. Philanthropy can potentially exacerbate this problem, as was seen in the women’s rights movement of the latter half of the 20th century, where the differing priorities and choices of a wide range of different donors resulted in myriad different groups being funded, each representing different interests, many of which proved to be incompatible.

Appreciating the historical context of the relationship between philanthropy and social movements brings to light many issues such as these. Understanding them can help us to avoid the mistakes of the past and ensure that funders and movements in the future are able to come together in ways that combine their respective strengths. Given that the interaction of traditional funders and CSOs with looser, network-based movements looks set to be a major feature of coming years, this is more vital than ever.

Rhodri Davies is Head of Policy at Charities Aid Foundation